The Best Things to do in Pont-Aven, France 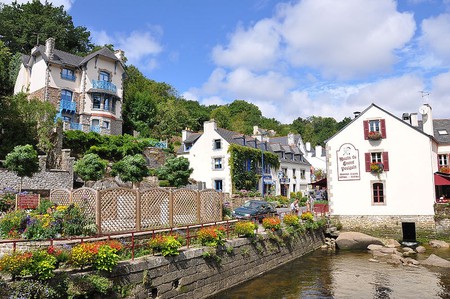 The village of Pont-Aven is a small commune recognized for its striking beauty, Breton traditions and for having served as a haven for legendary artists, most notably the post-impressionist, Paul Gauguin. Just as stunning today as it was when it attracted some of the biggest names in French painting, it merits a visit to explore its picturesque streets and art community that continues to flourish. Here is our list of the best things to do in Pont-Aven, France.

The Pont-Aven Museum displays works mostly by the artists of the Pont-Aven School, the name assigned to the artists who flocked to the village and evolved their art between 1850 and 1890. The group included now well-known names such as Émile Bernard, Paul-Émile Colin, Paul Sérusier and Paul Gauguin, with styles ranging from Synthetism to post-Impressionism. These painters were also part of Les Nabis, an avant-guard movement derived from post-Impressionism that emphasized colour and symbolism. As a result, the paintings here are bold, lively and often capture the Breton landscapes and people. 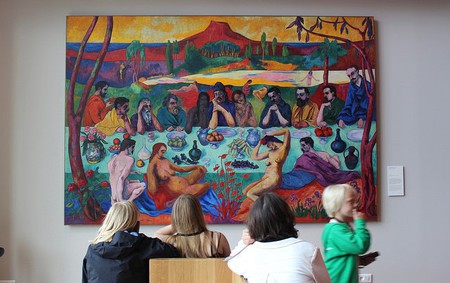 Before his famous stint in Tahiti, Paul Gauguin dwelled in Pont-Aven. Today, his legacy remains an important focus of the town and admirers of his work can visit the sites that inspired him and his fellow contemporaries. Approximately one kilometre outside of the village centre, the Chapel of Trémalo is a small 16th-century stone church housing the wooden cross that inspired one of Gauguin’s most notable works, The Yellow Christ, in 1889. The chapel sits on the edge of the Bois d’Amour, a wooded area where the Pont-Aven School would meet in search of colour and symbols in nature. A one-kilometre long pathway accesses the Bois d’Amour, allowing visitors to follow in the footsteps of the artists who would come here to create. 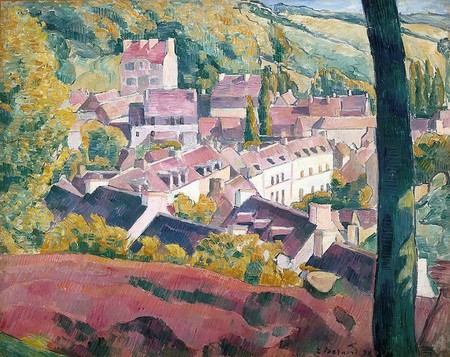 Pont-Aven Seen From The Bois d'Amour by Émile Bernard, member of the School of Pont-Aven | © Indianapolis Museum of Art / WikiCommons

The Maison Traou Mad, which means ‘Good Things’ in the Breton language, has been making the rich, buttery cookie native to Brittany, known as a galette, since 1920. Its flagship shop resides in Pont-Aven, where you can purchase beautifully decorated tins filled with the melt-in-your-mouth cookie. Pont-Aven’s sweet tooth extends to other confectionaries made in town, such as La Chocolaterie de Pont-Aven, a lovely shop with an outdoor terrace where you can enjoy sweet treats concocted by Eric Jubin, the chocolate maker. 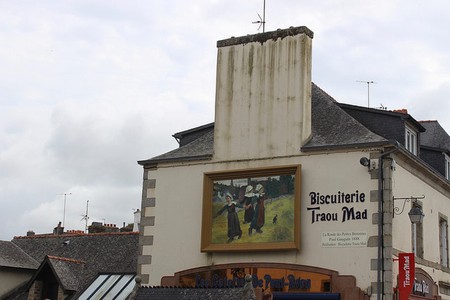 Journey down the Aven river by boat

For a different perspective, opt to explore the town from the Aven river. Guided boat rides are available daily departing from the town’s port and are also available for private rental. Approximately 12 kilometres downstream, the river makes way to the Atlantic Ocean, offering a number of beach spots and options for water sports. The Port Manec’h, with its white sandy beaches and charming streets, was once a hotspot for holidayers during the Belle Époque and remains a local favourite. 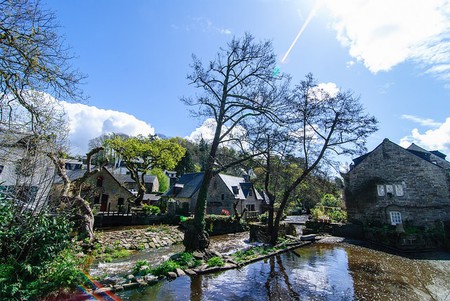 A serene setting along the Aven river | © Jérôme Decq / Flickr

Pont-Aven’s charm and natural good looks make way for scenic spots to go for a stroll. The Promenade Xavier Grall, a pathway named after a poet who lived here in the seventies, runs parallel to the river and passes by fairytale-like granite houses and ample greenery. The Promenade des Moulins is another marked trail that follows the town’s former watermills, which were placed throughout the Aven river to take advantage of its natural spits and rock formations and facilitate the water’s flow. Once a total of 14 mills, today, only four remain. The Grand Moulin de Poulaign is one of these four and is a restaurant as well as a window into the inner workings of its waterwheel. The mills also served as a subject for painting as seen in Paul Gauguin’s Watermill in Pont-Aven, 1894. 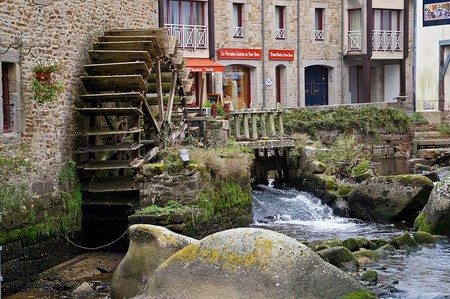 The Pont-Aven School continues to be the home of artists who have set up shops and galleries, some sitting alongside the river on the Rue du Port. The Galerie Dominique C is one of these port-side museums, featuring quirky, brightly-coloured paintings and sculptures made of bronze and brass by varying French artists. Local painter Myriam Guenaïzia has her shop, Galerie M. Guenaïzia, near the Pont-Aven Museum and showcases her vivid and geometric still lifes, landscapes and portraits.