The Best Beaches in Corsica 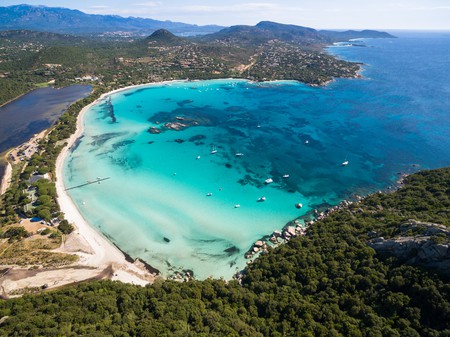 From wide bays dotted with smooth rocks to remote sandy beaches that can only be accessed by boat, Corsica offers a jaw-dropping range of options for a day on the coast.

Corsica is often said to have some of the most attractive beaches in the whole of France. That’s saying something for a country that boasts swathes of sandy surfing beaches from Brittany to Biarritz on the Atlantic coast, famous D-Day beaches that line the English Channel and the perennially popular Côte d’Azur on the Mediterranean coast. The island of Corsica itself is innately beautiful, with turquoise waters, sandy inlets dotted with shrubs and pine trees, undulating mountains and well-preserved historic towns.

Plage de Saleccia on the northern coast of Corsica is one of the most deserted strips of white sand on the island. Its beauty lies in its undeveloped coastline – the only thing in view along its half-mile-long stretch of sand is the Mediterranean shrub maquis, which is scattered along the coast. Most of the year, the only sounds come from the occasional visiting cow or the resident cicadas hanging out in the vegetation. When the beach gets busier in August, a good way to visit – like many locals – is to travel by boat, mooring offshore and lounging on deck with your legs hanging off the side. 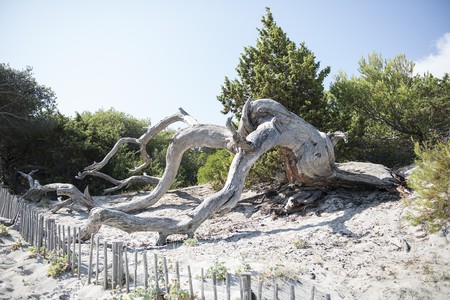 To the west of Saleccia, in the next bay along, is Lotu Beach. It sits at the exit of a little lake, Étang de Lotu, and is actually comprised of two separate beaches, Little Lotu and Big Lotu. Both Lotu beaches are quiet and calm, remaining undeveloped. There is, however, one restaurant, the divine La Cabane du Lodu, where you can enjoy delicious lamb cutlets or grilled prawns with your feet almost touching the ocean. Like many remote beach restaurants in France, it doesn’t accept credit cards so make sure to take enough cash. 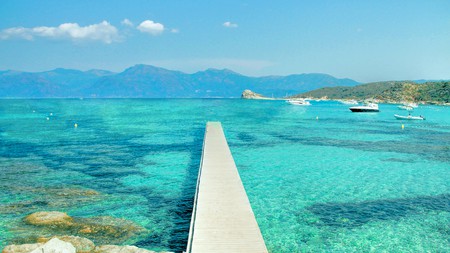 The backdrop for the impressive Roccapina Beach is a rock formation in the shape of a lion. Legend has it that thieves hid jewels from a shipwreck in the rock and, when the light hits it in a certain way, the story goes that the gems that are said to be stowed inside shine brighter than the other parts of the rock. It’s a popular but isolated place with a few small car parks nearby, which have paths through the maquis shrubs down to the beach. The beach gradient to the turquoise water is shallow so it’s perfect for smaller children. There are no amenities on Roccapina itself so take enough provisions to allow you to lounge in the pearly white cove until sunset. 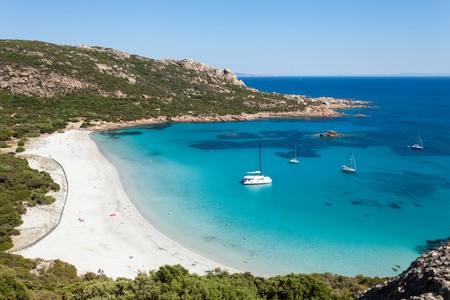 Palombaggia is near the town of Porto-Vecchio, whose 16th-century citadel and charming narrow streets are a perfect place to dawdle before or after a trip to Palombaggia, one of the most reputed beaches in Corsica. Pine trees look across the sand to its clear, crystal waters and lagoon-like bay. There are a few beachside, shaded restaurants to escape from the ferocity of the summer sun. Wander out to sea between the smooth rocks that rise up from the seabed and discover the three-kilometre-wide beach at your leisure. The water stays shallow for several metres out to sea. 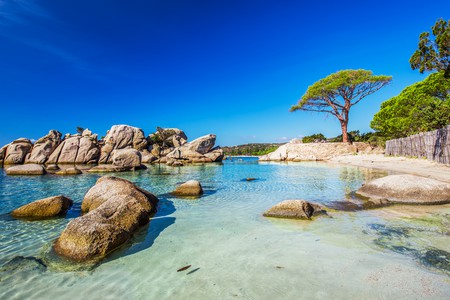 The area surrounding Ostriconi Beach is devastatingly attractive with lush green mountains rolling down to the sandy shore. Nestle in the dunes if there’s a hint of wind or find one of the many trees to seek out some shade. Nearby, l’Île-Rousse is the biggest town and it offers a historical diversion on a beach day. L’Île-Rousse is an active port and ferries come in from Marseille, Toulon and Nice. It was founded in the 18th century by Pasquale Paoli, a local Corsican leader, to rival the existing ports, such as Calvi, which were controlled by Genovese merchants in Italy. 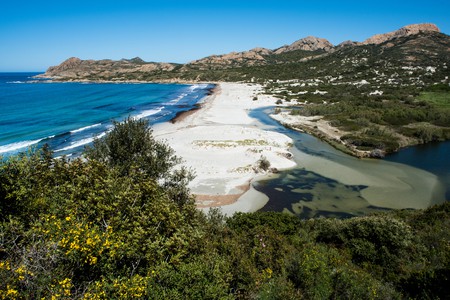 Travel further south from Palombaggia around the headland to discover Rondinara Beach. The bay is more sheltered than others on the island because it is situated between two large promontory rocks, which protect it from the wind off the sea beyond. Easier to reach than some others nearby, this beach welcomes a diverse range of visitors; you’re as likely to see older couples as young families hiring a yellow and turquoise pedalo and exploring the inviting waters or buying an ice cream from one of the stands and lazing on the sand. 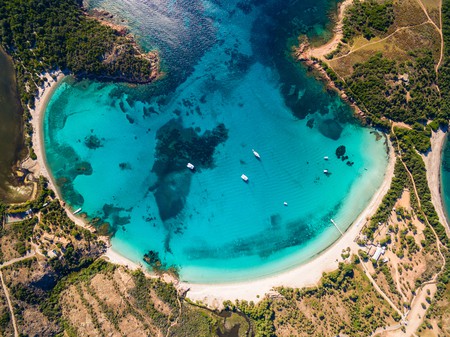 In the hilly terrain to the south of Corsica, Petit Sperone and Grand Sperone battle it out for the title of best rugged beach. It can be difficult to find either – you have to set your satnav to a place called Piantarella. Here, you’ll find O’Coco Piantarella Buvette et Grill, which is a great food and drinks shack and the last chance you’ll have to buy provisions as it’s the only shop for miles around. Trample through the countryside in a southerly direction for 15 minutes and you’ll reach sand dunes and a shallow cove called Petit Sperone, which is only 100 metres long. Its larger sister cove, Grand Sperone, is a further short trek south around the coastline – follow the golf course and walk down from the cliffs. Grand Sperone has large rocks to shelter from the sun and several metres of knee-deep water before it gets deep enough to plunge in. Whichever Sperone beach you choose, make sure you wear sturdy walking shoes for the journey down. 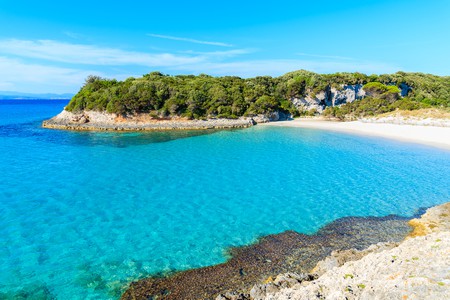