Estonia and its Love for Extreme Swinging 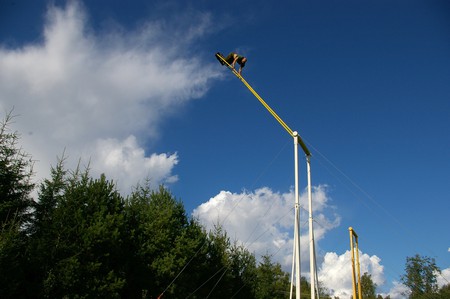 Starting out as a childhood past time, by way of a traditional Easter celebration, swinging has developed into the sport of kiiking in Baltic Europe, and it looks amazing.

To ‘kiik’ is to ‘swing’, at least in Estonia. The sport of kiiking, however, is not a trip to the playground to sit sedately on a hanging car tyre. Invented in 1996, this new sport challenges its competitors to swing further and higher than anyone else.

In kiiking, the arms of the swing are made from steel, making it possible to swing a complete 360 degrees. The difficulty comes in generating momentum, with participants needing to pump their legs to start the swing moving and maintaining a rhythm to get faster.

Ado Kosk, the creator of the sport, noticed that the longer the arms, the more difficult it is to swing the full 360 degrees. By making the arms telescopic they could be lengthened, adding a competitive aspect, with the person able to swing with the longest arms winning the competition.

So, while a high jump event may have competitors incrementally raising the bar that they have to jump over until the competition is left with a winner, kiiking sees a similar format with arms getting longer, instead of a bar getting higher.

According to kiiking.com, the record for arm length is 7.03m. Set in 2012, it is only 2cm longer than the world record set in 2000, something that has only been bettered twice since. The tiny improvements in the record are an indicator of the sheer difficulty of the activity.

Raili Laansalu, who has been kiiking since she was a child, and who set up kiiking.com with her family, says, ‘We, who are kiikers so to say, like to say that “kiiking” starts when your legs are higher than your head, before that it is just swinging’.

Excelling at the sport requires a specific set of attributes. Laansalu says, ‘It takes a lot of arm and leg strength, as well as solid technique to master the perfect timing of when to stand, when to sit, and when to thrust to complete a 360.’

While the sport may seem strange to some, it’s perhaps unsurprising that its birthplace is Estonia. The country’s Kiigepüha – ‘or Swingback’ – is an Easter festival celebrated in Estonia, as well as other Finno-Ugric nations. According to Visit Estonia, ‘Easter Sunday was usually the day when eggs were exchanged or given as gifts. Young people would meet at the nearby village swing and girls would give the Easter eggs they decorated to the boys as a thank you for building the swing they would then spend their afternoon on’. 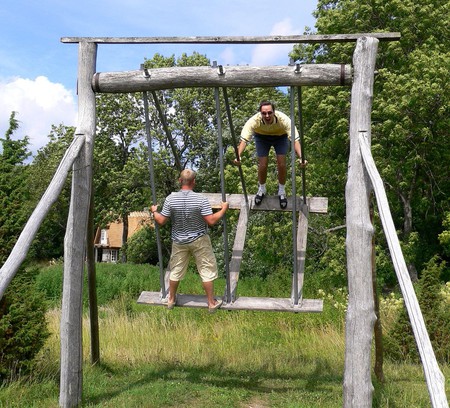 Today, Estonia still has plenty of towns and villages with wooden, communal swings. These, of course, were never built for competition. Their purpose was, and still is, for a sense of ritual, of community and of celebration. They are built wide enough to accommodate a number of different people (depending on their size), rather than one person pushing the swing, and their own body to the limit. The sport is a radical departure from its traditional origins, but its advocates are serious about expanding it beyond Estonia’s borders.

Kiicking.com allows people to either buy or rent swing sets. There are two options available, one that ranges from three to four meters, and one from four to six metres (both adjustable at 5cm increments). Renting a set – probably the more likely option – comes with a team who will set up the equipment properly, instruct on how to use the swing and oversee its use, making it a unique alternative to organised activities.

Relatively speaking, the sport is still in its infancy. The rules of competition are regulated by the Eesti Kiikingi Liit (Estonian Kiiking Union), but it is still only played in local clubs. The next logical steps for development of kiiking would be for official national and international tournaments to be organised.

Kiiking still falls some way behind the likes of basketball, football and cycling, but its connection with Estonian identity sets it apart from the other sports. As that connection becomes more visible further afield, and with greater exposure, its popularity will surely rise.

Read on to discover more sports you didn’t know existed: Why Does Finland Have So Many Wacky Sports Events?