6 Traditions Unique to the Kihnu: Where Women Rule

Kihnu is a little island off the coast of Estonia that celebrates its women. The Kihnu community’s culture is considered a UNESCO Intangible Cultural Heritage of Humanity due to the largely female-led society. With men traditionally working off the island, the women of Kihnu hold unparalleled knowledge of their traditional culture, demonstrated in songs, dances, celebrations, and their deftness at making handicrafts. However, due to the poor economic opportunities on the island which are causing young people to move to Estonia’s mainland, Kihnu traditions are being lost.

Perhaps their most visible tradition, Kihnu women wear handwoven woolen handicrafts, the colors and patterns more striking than their mainland counterparts. With red as the main color, shades of pink, green, yellow, white, and blue cover their striped skirts, and flower and leaf motifs decorate their scarfs and head coverings. It is time consuming and hard work to create these stunning clothes, so traditionally women get together to make their outfits. If men come to watch, they do their best not to disturb their work.

Estonia celebrates this beautiful handiwork at Tallinn Airport. The next time you fly through, be sure to notice the beauty of the striped seat covers!

The Kihnu culture can also be experienced with a visit to the UN in New York City, USA due to an art installation by Anu Raud. This striking art exhibition focuses first and foremost on the colorful woven skirts. 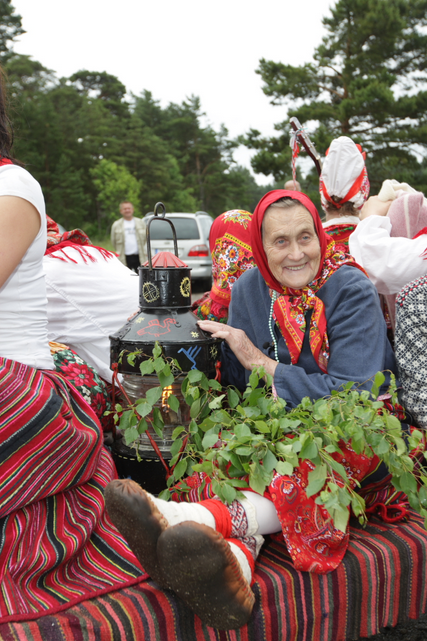 Kihnu culture can also be experienced through their traditional songs and music. The music has its origins in pre-Christian times and it is known as runic or Kalevala-meter singing. Many of the songs are considered lyrical or narrative, and songs are sung throughout daily life. Numerous lullabies and songs for children also exist. Although songs are being lost with time, women are still the main custodians of traditional songs and typically have a large repertoire of songs.

Many Kihnu converted to Russian Orthodoxy in the mid-1800s in hope to obtain farmland from the Russian tsar who, at that time, ruled Estonia. Russian Orthodoxy is still practiced today, although it also incorporates a mix of Kihnu seafaring and pre-Christian traditions.

Kihnu, Estonia, by @fotodisiac. "Kihnu women weave their own fabric and make their own clothes in much the same way that they've done for centuries. There are hundreds of patterns and colours worn in accordance with a woman's age, martial status, etc. Many women prefer to wear their traditional clothes daily but the teenagers I saw seem to prefer western clothing." #kihnu #estonia

Even during Soviet times, the Kihnu still practiced baptisms, although these traditions differ from typical Russian Orthodox baptisms. A Kihnu baptism is held at the godparents’ home or in a church. During the celebration, godparents and relatives give monetary gifts to the child and the mother pours baptismal water on a planted apple tree. Following this ritual, a large meal is enjoyed by all.

Kihnu wedding traditions are based upon clan alliances, with traditions dating back to pre-Christian times still practiced. A Kihnu wedding has elements of former Finnish traditions. A wedding is celebrated by gifts being given to both families, and the bride being taken from the parents’ home and brought to the home of the mother-in-law. During this procession, the bride wears a covering over her head to protect her from magical influences. Upon arrival to the mother-in-law’s (and her new) home, a ceremony takes place featuring numerous songs, dancing, and rites including changing the bride’s head covering to that of a married woman’s headdress. Specials songs traditionally accompany each part of the wedding ritual. This wedding celebration takes place over several days.

Dressing like a true local and taking a spin on a motorbike? Once in a lifetime experience! Thanks, @visitestonia #estonia #travel #culture #island #kihnu #motorcycle #rural

Kihnu people have several celebrations where friends, families, and clans gather to make merry. St. Catherine’s Day is celebrated on November 25th each year. During this celebration, men and women wear masks and sing fertility songs. Of course, food is shared among celebrants and gifts are given between households.

St. John’s Day on June 23rd is another large celebration. This day is celebrated throughout the Baltics as it is the longest day of the year. On Kihnu Island, St. John’s Day is celebrated by decorating homes with birch branches. When the sun finally sets, communities gather together for bonfires, dancing, singing, and other merriment until dawn breaks.