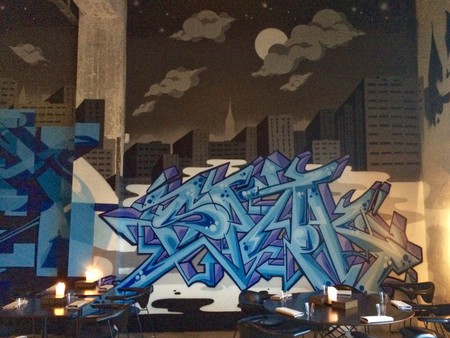 Some chefs have excellent taste in tunes as well as food, and you can hear the carefully curated playlists of the coolest whenever you like.

Amass, a restaurant in Copenhagen, is widely considered among the top spots in the food-centric city. It’s the edgiest fine-dining restaurant we can think of, with dining room walls sporting graffiti murals that change seasonally and hip-hop playing at an audible but unobtrusive volume throughout service.

The restaurant’s music is cited in just about every writeup it’s received. And it really is great. Amass takes its food, and its service, seriously—even the water glasses are by Zalto—but retains a welcome degree of lightheartedness in both attitude and cooking, rare in the fine-dining sphere. Its music echoes that approach: carefully curated, obviously, yet playful.

On various visits to Amass, its tunes have ranged from heavily deep-cut old-school—think People Under the Stairs and The Pharcyde and even Souls of Mischief—to a playlist of about 90% A Tribe Called Quest, both old and new. During our most recent visit, our server let a secret drop: All of the restaurant’s playlists are available on Spotify.

It’s the ideal souvenir, and better than any doggy bag: I can now listen at any time to the brilliance that someone, presumably chef Matt Orlando himself, has assembled… and so can you.

Fall is here. Seasons change, our regular opening hours do not. We are open for dinner Tuesday to Saturday, and lunch every Friday and Saturday. We look forward to welcoming you! #Amass

We did some digging on Spotify and came up with some other epic restaurant playlists you’ll also love. Perennial cool-kid chef David Chang has commented for Gourmet Traveller, “After eight years of making playlists, I’ve never wavered from one simple rule: I play the music I want to hear if I’m eating in a restaurant, not what I think the customer wants to hear. We have a fondness at Momofuku for unconventional food and design, and the music ties it all together,” he says. “One of the key benefits of the only-playing-music-I-want-to-hear-in-restaurants rule is that it narrows down the entire musical universe to a master list of about 4000 songs. This might seem like a really small number, but in a bizarre totalitarian restaurant-music situation, it works.” That master list? It’s here. NYC’s Meatball Shop is known for its tunes; its playlists are public as well.

You don’t even have to have visited these restaurants to love these tunes—though they might inspire you to make a reservation, for sure. They’ll also help you get through your commute, inspire you during the workday, or pump up your own dinner party.