Discover the Forgotten Giants in the Woods of Copenhagen 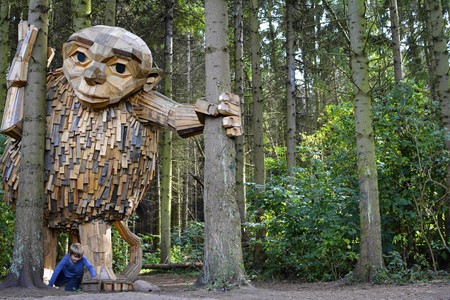 Six huge wooden sculptures have been placed in various areas around Copenhagen and Thomas Dambo, the artist behind the innovative project Six Forgotten Giants, is inviting locals and tourists to start a hunting game and discover the exact locations of the sculptures and explore the Danish landscape. This article gives you some useful hints to prepare for your adventure.

‘As humans we often have a way to choose the beaten path and the main roads’, says Thomas Dambo, the artist behind The Six Forgotten Giants, pointing out that he strives to change that with his artwork. His goal is to encourage more people to explore nature and discover places and landscapes that they’ve never seen before.

Dambo decided to place six wooden sculptures in different areas on the outskirts of Copenhagen. Now, those who are strolling around Rødovre, Hvidovre, Vallensbæk, Ishøj, Albertslund and Høje Taastrup may be lucky enough to meet one of the Forgotten Giants. However, those who want to leave nothing to chance should follow the instructions on the artist’s website and start an entertaining and unusual hunting game. 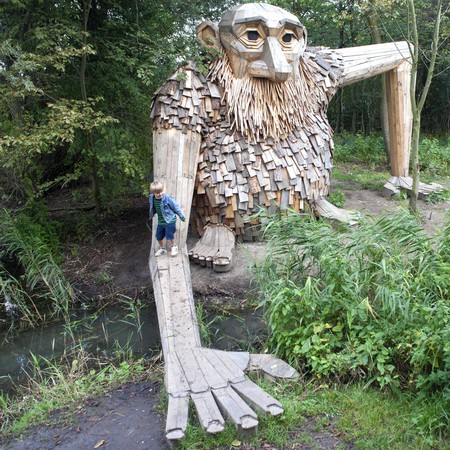 Passionate about street art, Dambo never misses a chance to exhibit his work outdoors. It allows artwork to merge with the environment and have an ‘impact’ on people – whether it’s persuading them to go off the beaten track or just to climb on the top of a sculpture and enjoy a beautiful view. He chose to put The Six Forgotten Giants at specific places in areas not well known to the public and each one of them is uniquely related to its surroundings.

Little Tilde is hiding behind a tree and Teddy Friendly is sitting by the lake with his arm stretched over the water. Sleeping Louis is lying somewhere in the forest, in turn providing shelter to the homeless people of the area. Thomas On The Mountain enjoys the spectacular view of a vast forest that some years ago was used as a waste field. Oscar Under the Bridge stretches his hand from the ground all way up to a bicycle bridge and Hill Top Trine ‘sits back’ to enjoy the view from up a hill. 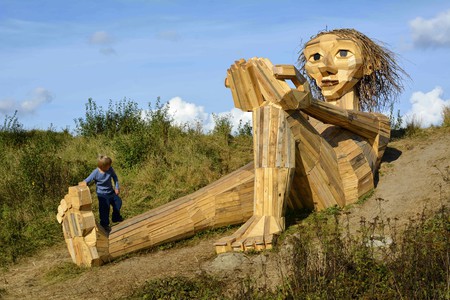 Thomas Dambo uses recycled materials found in the city’s dumpsters and, along with his team, strives to create projects that are beautiful and funny at the same time. The six wooden giants are made from scrap wood and were constructed with the help of a group of young volunteers from a local school and a couple of seniors.

The first time Dambo made a sculpture in a secret place was in Puerto Rico and shortly after he discovered that many people had visited the place to discover his artwork. So when the municipality of west Copenhagen asked Dambo to create a project, as he pointed out: ‘It seemed natural to make something which could get people out and explore the beautiful nature in the hidden outskirts.’ 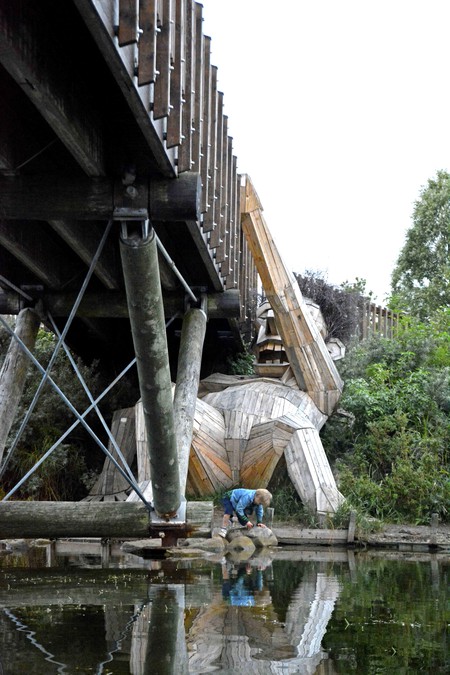 Oscar Under the Bridge | Courtesy of Thomas Dambo
Give us feedback