If you’ve heard of Freetown Christiania, the autonomous anarchist district in Denmark’s capital, it is probably due to the open cannabis trade that took place there for close to half a century. There’s a lot more to it than that, however. Below, Culture Trip give you a run-down of the must-know things when it comes to visiting Copenhagen’s most hippie neighborhood.

Freetown Christiania is located in the Christianshavn area and you can get there by metro, bus or bike. Cars are not allowed within the district, so don’t bother driving. Get off at Christianshavn St and head southeast towards Dronningensgade; in approximately 15 minutes you’ll be entering the bohemian district. If you don’t want to walk all the way there, take bus 9A from Christianshavn St and get off at the next stop (Bodenhoffs Plads). Another way to reach Christianshavn St from the city center is to take bus 350S from Nørreport St. 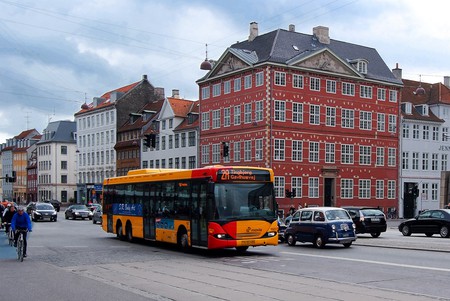 What is Freetown Christiania?

Christiania is a former military base that sat abandoned for many years before becoming the neighborhood we know today. In 1971, a group of hippies broke down the barricades and began squatting there. Nowadays, approximately 900 people live in the area, comprising a community that has its own rules and regulations completely independent of the Danish government. During its relatively short history, Freetown Christiania has faced a certain amount of turmoil. This is mainly due to the cannabis trade taking place in its famous “Green Light District.” At one time, police officers regularly invaded the neighborhood, occasionally arresting dealers. In August 2016, a shooting in Christiania injured three people, including one police officer. 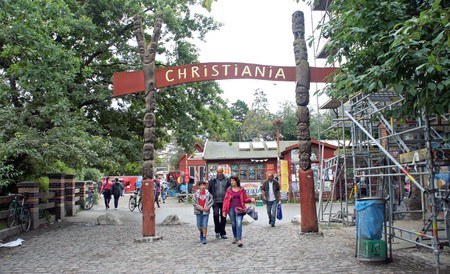 Christiania has been famous for many years thanks to the permanent stalls along Pusher Street—or ‘The Green Light District’, as it was once known—that sold all types of cannabis (illegal elsewhere in Denmark). Don’t get your hopes up about seeing this type of thing today, however, as the stalls have been forced to close due to conflicts surrounding drugs in the area. Violence has no place in the hippy community and many residents are campaigning to clear Christiania of all drug activity. Although whispers of marijuana deals can still be heard within The Green Light District, locals have appealed to the people of Copenhagen, asking them not to buy drugs in Christiania. After Pusher Street was closed, the city was covered in posters, created by the inhabitants, with the words reading, “help Christiania—buy your hash elsewhere”. 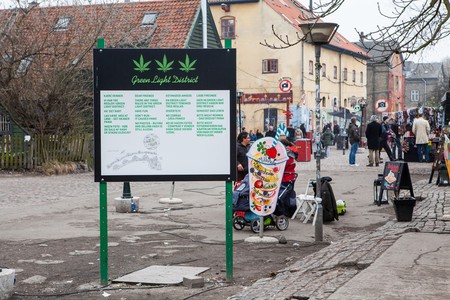 Up until recently, a sign confronted you the moment you entered Christiania. It read: “Dear friends, There are three rules in the green light district: have fun; don’t run—it causes panic; no photos—buying and selling hash is still illegal.” Taking photos at the Green Light District is now allowed but you should always ask people before photographing them, even if they’re just in the frame. 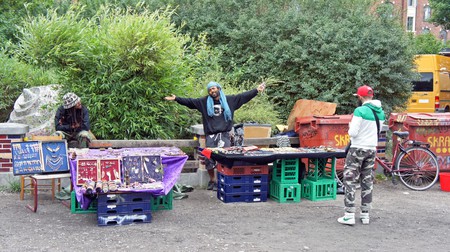 If you want to buy a little token to remember Christiania by, there are many options. T-shirts with the symbol of Christiania, jewelry, smoking pipes and many more items are sold at relatively low prices within the neighborhood. If these stands don’t satisfy your appetite for shopping, roam the pedestrian alleys and rummage through the clothes stores. 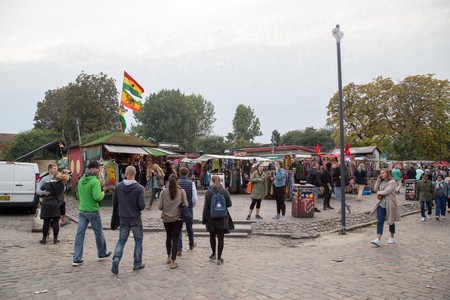 From breakfast and brunch to hamburgers and vegetarian restaurants, Christiania is a place to suit all food tastes. If you’re in the mood for pastries, head to Sunshine Bakery and taste a typical Danish kage (cake). Prices are quite low and all of the products are super tasty. Café Nemoland is famous for its juicy burgers and sandwiches, and you can also find coffee and desserts there. Vegans should definitely taste the dishes at Morgenstedet and at Grønsagen. Taste their delicious recipes, all made with fresh vegetables, while you relax in the super cozy atmosphere. Café Loppen serves vegetarian dishes inspired by Thai cuisine. All the dishes and drinks are organic, as this restaurant believes in healthy food without frills. Månefiskeren, open from Tuesday to Sunday, is a spacious café with quirky paintings on the walls. For the warm sunny days, the café has an outdoor area with large wooden tables you can share with locals. Smoking is allowed at Månefiskeren and there is even a pool table for those who want to brush up on their skills. 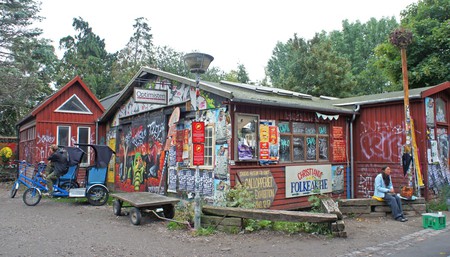 There are plenty of live music venues in Freetown Christiania, each one with its own special atmosphere. Jazz lovers should definitely check out Jazzklubben. The small smoky bar hosts professional and amateur musicians, while on the Sunday jam sessions everyone is welcome to go on stage and play their favorite instrument. From Thursday to Sunday, the district is filled with music spilling out of Operaen café. DJs, acoustic concerts and jam sessions take place in the colorful café until after midnight. For concerts and performances, keep an eye on Music Loppen’s official website. Finally, if you want to enjoy a drink and listen to music at the oldest bar in Christiania, look out for Woodstock at the end of Pusher Street. 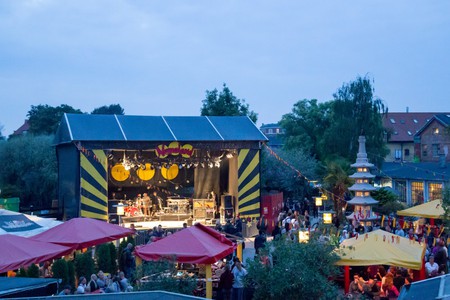 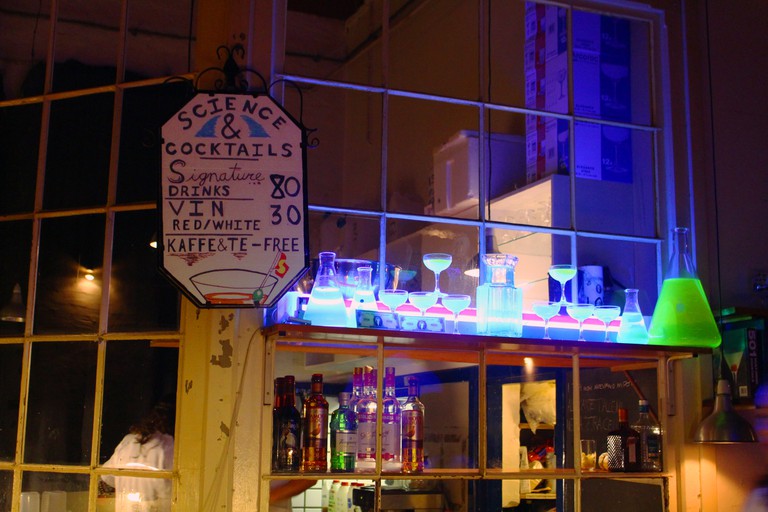 Science and Cocktails | © Aliki Seferou
Every second Tuesday evening, Christiania cinema (Byens Lys) gets packed with people who want to enjoy a chilled cocktail while listening to scientific presentations. Science & Cocktails has been running since 2010 and still holds a place in locals’ hearts. Experienced mixologists create unique cocktails, while researchers and scientists go on stage presenting intriguing topics. As it’s a non-profit organization, all the people who are involved in these special Tuesday evenings work on a voluntary basis and the result is awesome. The presentations are held in English and they often evolve into conversations between the guest speakers and the audience.
Open In Google Maps
Fabriksområdet 99, Freetown Christiania, Copenhagen , Denmark
Visit Website
Visit Facebook page
Give us feedback 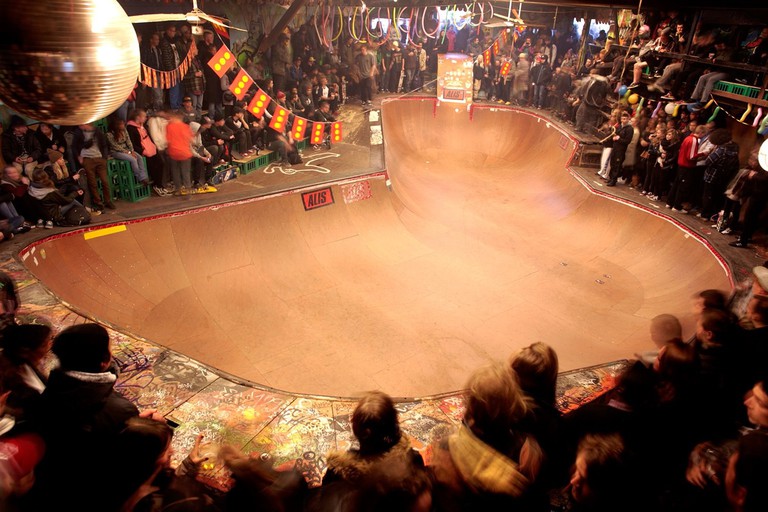 Among the restaurants, cafés and music venues in Freetown Christiania stands ALIS Wonderland, one of the Copenhagen’s most famous skateparks. Constructed 20 years ago by two friends that were born and raised in the hippie district, Wonderland instantly became a meeting point for Copenhagen’s skate community. Nowadays, not only does it continue to attract the city’s underground crowd, but many renowned skaters, photographers and street artists travel from abroad to attend events and competitions that take place in the wooden skate bowl.

Once you pass the area where the cafés and the restaurants are, there is an entirely different world to discover within Freetown Christiania. A canal, surrounded by trees and small colorful houses, separates Christinia from Copenhagen‘s mainland. In a moment you will feel like you’re not in the middle of the city. Walk or bike along the water or simply sit down and relax on its banks. 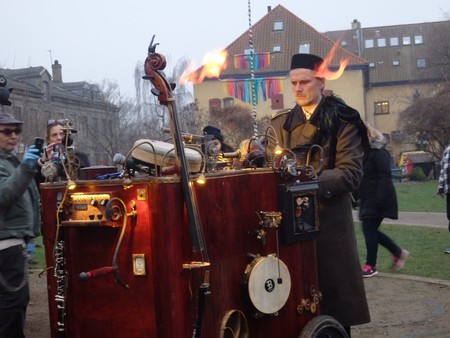 In December, Christiania hosts its own Christmas market and is one of the best in town. Luckily for visitors, it takes place indoors. The smell of baked almonds and mulled wine from the stands welcomes you once you step inside. There you’ll find numerous stalls with clothes, jewelry, and handicraft décor items, while a band fills the place with tunes. When you’re done shopping, taste the local cuisine at one of the food stands.