Before and After Dogme 95: The Best of Danish Cinema 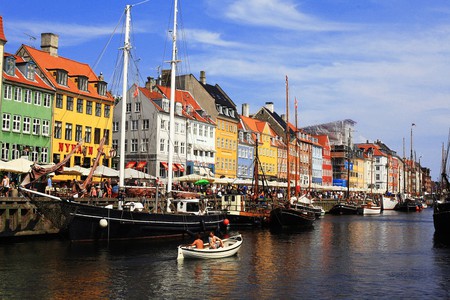 Contemporary views of Danish film are still dominated by the rebellious ‘Dogme 95’ movement; Lars Von Trier‘s maverick and confrontational project. However whilst Von Trier and his cohorts are undeniably stalwarts of the Danish film industry there are many more unrecognized luminaries in this Scandinavian country’s cinematic world; we look at some of the best.

Directed by Thomas Vinterbeg, The Celebration is recognized as the first film to be made according to the rules set out in the Dogme 95 manifesto. Dogme 95 itself was a cinematic movement which began in 1995 (hence the name) and lasted until 2005. It was made up of young Danish directors who preferred using stripped back production values and naturalistic acting to achieve the greatest level of realism possible. Gaining momentum through its accessibility and inclusive format, it championed unknown directors, producing films based only on their skill behind the camera. The narrative of The Celebration focuses on a get-together to celebrate the 60th birthday of a family patriarch. Traditional conventions and polite formalities are torn apart however when the son accuses the father of molesting him and his sister in their infant years. Strikingly blunt in its realism, The Celebration ushered in an exciting and frenetic period of Danish creativity.

Before Nicolas Winding Refn was making men and women swoon with Ryan Gosling in the noir fairytale Drive; he was directing Denmark’s first and most acclaimed home-grown gangster flick. Originally a ten minute short, Refn turned down an offer to study at the Danish Film Institute to transform Pusher into a feature-length independent film. Perhaps the best decision he ever made, the film sparked Refn’s career and a stand out performance from Danish actor Mads Mikkelsen also helped launch his. Shot on handheld cameras, Pusher is an unabashedly visceral and gritty thrill ride through Denmark’s criminal underworld.

Another leading member of the Dogme 95 movement; revered Danish director Susanne Bier‘s most recognized work is After the Wedding. The story follows Jacob Peterson (Mads Mikklesen) a charity worker in an Indian orphanage which is in serious danger of bankruptcy. In order to raise the necessary funding he returns to Copenhagen to strike a deal with corporate big wig Jørgen Hansson (Rolf Lassgård) on the condition he attend his daughter’s wedding, which comes with shocking revelations. Brimming with lies, secrets, and conceit, similarities to The Celebration are swiftly apparent.

Per Fly‘s début feature is a meticulously researched parable with social realist elements. The first chapter of his acclaimed Denmark trilogy; each one focuses on a particular social class: lower (The Bench), upper (The Inheritance), and middle (Manslaughter), in that order. Events center around Kaj (Jesper Christensen), a deadbeat slave-to-the-bottle living on social welfare hand outs. The bench in question is Kaj’s favorite drinking spot with his boozing buddies. His life undergoes a drastic change however, with the arrival of some life-affirming new neighbors. Fly shadowed a social counsellor for an extended period of time in order to accurately animate his script and characters and to reflect the reality of their situation. The Bench is a thoroughly accomplished appraisal of Danish culture and a striking examination of the depths of the Danish class system.

The Idiots is the second part of prolific and maverick Danish auteur Lars Von Trier’s ‘Golden Heart Trilogy’ which also includes Breaking the Waves and Dancer in the Dark. Co-founder of the Dogme 95 movement with Thomas Vinterberg, the film is also known as Dogme #2; the second film made according to the movement’s strict conventions. Known for its extremely controversial content, The Idiots follows a seemingly anti-establishment group of middle aged adults who recreationally channel their ‘inner idiot’ by acting in public as if they were disabled. Although fictionalized, there was no getting around Trier’s flagrant approach to the subject, which many criticized for its lack of distinction and compassion. The film also warranted protest for its explicit and uncensored sexual content leading to restrictions on the film’s screenings. No contemporary director splits opinion as fervently as Von Trier and The Idiots is one of the best examples why.

Widely considered one of the greatest directors of all time, Carl Theodore Dreyer delivers a melancholic adaptation of playwright Hans Wiers-Jenssen’s Anne Pedersdotter, a staging of the Norwegian witchcraft trials, in Day of Wrath. Set in the first quarter of the 17th Century, Anne (Lisbeth Movin) is married to the town’s ageing Priest (Thorkild Roose), a stoic supporter of the national witch hunts. The arrival of the Priest’s son (Preben Lerdorff Rye) and the subsequent relationship between him and his stepmother results in tragedy. Received poorly at the time of its release and making few gains financially, the Danish audience was largely unsatisfied with its languorous tempo. However the film is now recognized as a classic and a prescient allegory for the Nazi persecution of European Jews.

Writer-director Anders Thomas Jensen, a frequent collaborator with Susanne Bier, brings this darkly humorous and affective story of redemption to life. After serving a spell in prison, neo-Nazi (Ulrich Thomsen) must fulfil his debt to the state by completing several months of community service when living in a small religious community. Whilst there he comes into contact with two other convicted criminals and an enigmatic priest named Ivan (Mads Mikkleson) who is hopelessly devoted to his cause. Whilst some of the Danish sensibilities might get lost in translation when shown to other audiences; there is no doubt that Jensen has the ability to spontaneously create laughter from the oddest and most surprising situations. Managing to blend tragedy and comedy with the deftest of touches, Jensen delivers a thought-provoking and scintillating piece of Danish comedy.

Melding action and comedy In China they Eat Dogs draws comparisons with Guy Ritchie‘s Snatch, or Edgar Wright’s Hot Fuzz; however director Lasse Spang Olsen’s film is a typically Danish take on the genre. The plot follows Arvid who unexpectedly foils a bank robbery with a squash racket. After proclaiming himself a hero, his perceptions are changed when he discovers one of the men committing the stick up was doing so to provide urgent medical care for his young son. This revelation turns Arvid into a scholar of moral absolutism and he decides to plan his own robbery to aid the incarcerated family man. With witty dialogue from Anders Thomas Jensen and a plethora of philosophical reprobates the film rockets from one psychotic crime caper to another.

Based on the short story by beloved Danish author Karen Blixen (Out of Africa), Babette’s Feast was the first Danish feature to win the Academy Award for Best Foreign Language Film. Directed by Gabriel Axel, events take place in 19th Century Denmark and focus on two elderly sisters (Bodil Kjer & Birgitte Federspeil) who try to look after their deceased father’s congregation in a small isolated coastal town. Moving back in time, political exile Babette’s (Stéphane Audran) arrival in the fishing village and her influence on the lives of the two sisters is slowly revealed to the audience to profound and moving ends. Featuring a smorgasbord of treasured Danish and international actors – including the first lady of Danish theater Bodil Kjer – Babette’s Feast is an enchanting piece of cinema which focuses on transcending cultural and religious boundaries.

It was obvious that Ole Bornedal‘s superb Nightwatch had gained true cult status when it was administered with the less then underwhelming 1997 American remake treatment. Stripping the original script of all subtleties and nuances, Steven Soderbergh’s outing’s only worth is to reveal the strengths of the Danish original. Set in a forensic medical institute, Martin’s (Nikolaj Coster-Waldau) temporary occupation as a student night watchman goes a little beyond its job description when confronted with unexplainable and horrifying happenings in the building’s morgue. Beredal’s accomplished storytelling thoughtfully evolves as the film gains momentum. Eerily creepy, Nightwatch is a film to ogle at through clasped and clammy hands.