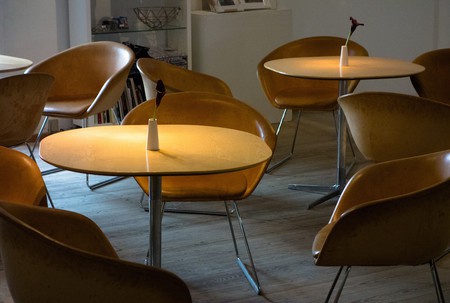 Strongly influenced by the functional forms of the Bauhaus school in Germany, Danish designers have lead the way in design, particularly in the fields of furniture and lighting design. Culture Trip takes a look at some of the most influential mid-century Danish designers. 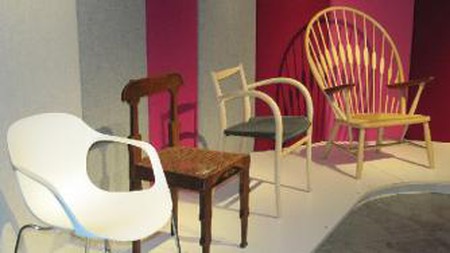 Taking advantage of new industrial technologies, they combined this inspiration with minimalist design. This style became so influential that it is recognized as a design movement in itself, entitled Danish Design with a subgroup known as Danish Modern. Also minimal, Danish Modern focused more on the aesthetics of modern design whilst employing the exquisite technique and material familiarity of highly skilled craftsmen such as cabinet makers. 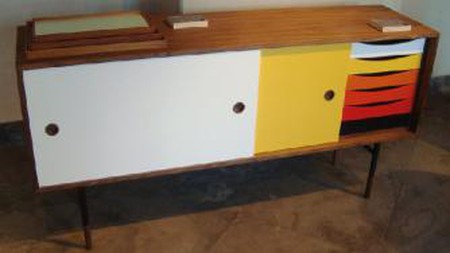 One of the leading figures in the Danish Design movement was Finn Juhl, a Danish architect, interior, and industrial designer. Making his design debut in 1937, Juhl collaborated with cabinetmaker Niels Vodder. Initially producing his furniture in small numbers, Finn Juhl exhibited at the Cabinetmakers’ Guild Exhibition, which emphasized artisanal work over new mass production methods. Although today Finn Juhl furniture is both desired and revered, it was not initially well received. His famous Pelican Chair, first produced in 1940, was described as ‘aesthetics in the worst possible sense of the word.’ Credited with introducing Danish Modern to America, such tepid reception hardly kept Juhl’s furniture from quickly becoming instantly recognisable and in vogue. 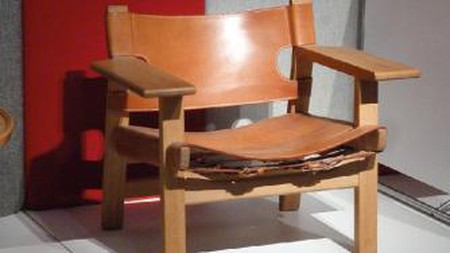 Initially training as a cabinetmaker in 1934, Børge Mogensen studied furniture design at the Danish School of Arts and Crafts from 1936-37. Mogensen next underwent training as an architect from 1938-42 at the Royal Danish Academy of Fine Arts’ School of Architecture, and is arguably an incredibly important figure in Danish Design. While studying architecture, he also worked at various Copenhagen-based design studios, most notably with Kaare Klint. A prolific furniture designer, Mogensen exhibited most years at the Cabinetmakers’ Guild Exhibition. His furniture clearly showed his training as a craftsman, and sought to bridge the gap between traditional and modernist furniture. By using classic design in combination with good craftsmanship, his furniture was appealing to both parties. 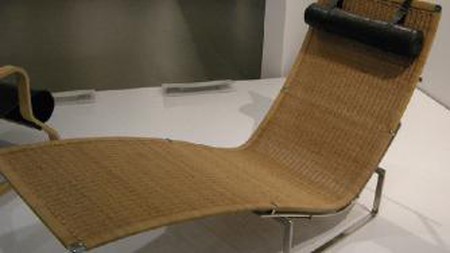 Poul Kjærholm, like so many of his contemporaries, began his career in design as a cabinetmaker’s apprentice, working under Gronbech in 1948. He then went on to the Danish School of Arts and Crafts, Copenhagen in 1952. Throughout the mid-1950s, Kjærholm began to develop his distinctive style, which won him the prestigious ‘Lunning Award’ for his PK22 chair. Unusually opting for steel as his primary material (most of his contemporaries chose wood), Kjærholm would combine it with other materials such as leather, cane, marble, and wood. His 1965 PK24 Chaise Longue shows the culmination of his design style; also referred to as the Hammock Chair, it combined simple flowing lines with steel and woven cane. 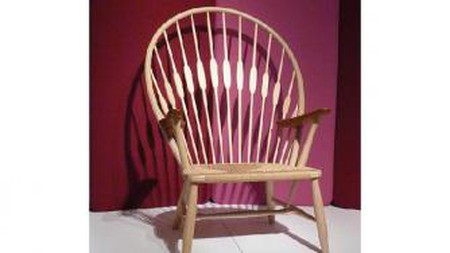 A world-renowned furniture designer, as the son of a cobbler, Hans Wegner grew up surrounded by fine craftsmanship. Beginning his career early, he was a child apprentice to master cabinetmaker H. F. Stahlberg, where he discovered his affinity towards wood. After completing his education Wegner went on to work closely with cabinet makers from the city’s Carpenters’ Guild, using it as an opportunity to experiment. He later began to work with Erik Møller and Flemming Lassen on the Århus City Hall, and subsequently worked with Arne Jacobsen before eventually starting his own company. Wegner’s approach to design combined the old with the new; he would strip traditional chairs down to the barest of design elements in order to show them in the purest form of construction. 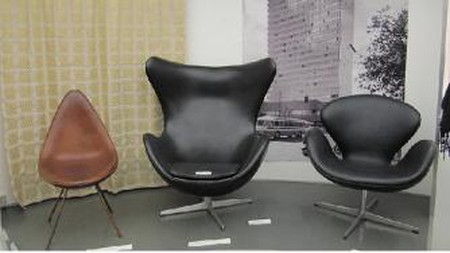 Perhaps one of the most well-known of the Danish Designers, Arne Jacobsen had a long and varied career and made important contributions to architectural Functionalism. Showing considerable talent from an early age, Jacobsen initially wished to be a painter; it was his father that steered him towards architecture as a career. This proved to be very promising, with Jacobsen winning an award, while still a student in 1925 at the Paris Exposition Internationale de Arts Décoratifs et Industriels Modernes for a chair design. His career, however, was interrupted by the war; Jacobsen was Jewish and thus had to flee to Sweden until the end of the war. Upon his return, he slowly but surely managed to build up his design practice again, eventually going on to produce such design classics as the Egg and Swan chairs, as well as working on large architectural commissions around the world. 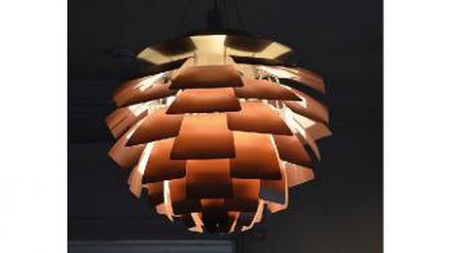 Often referred to as PH in his native Denmark, Poul Hennignsen was a Danish author, architect, designer and critic, but is today most well remembered for his lighting design. One of the leading figures of Denmark’s cultural scene during the interwar period, Henningsen’s literary career was illustrious to say the least. He initially sought training as an architect, but never graduated from the course as he pursued his interests in inventing and painting. In particular, Henningsen is known for designing lights, referred to as PH-Lamps. These were redesigned into various incarnations, the most well-known of which is the PH Artichoke lamp. The lamps explored ways of breaking up light to create interesting luminary effects. 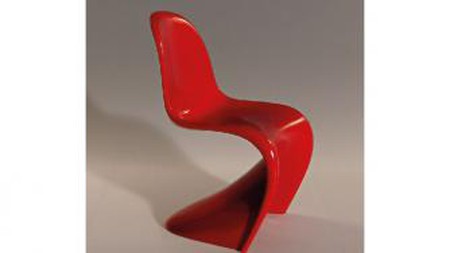 Born in 1926, Verner Panton is one of the younger Danish Designers active during the mid-century period. Famous for his furniture and interior design, Panton created innovative and futuristic designs, often experimenting with new materials such as plastics. This allowed him to create fluid forms in bright colors that were hugely popular in the 1960s, and have remained to be so to this day. Working at the architectural practice of Arne Jacobsen for the first two years of his career, Panton very quickly set up his own design and architectural office, where he created innovative architectural proposals, such as a collapsible house in 1955. In 1960 Panton designed and manufactured the Stacking chair, or S chair, the first single form injection-moulded plastic chair. His most famous and mass-produced design, the S chair is still in production today, available from companies such as Vitra. 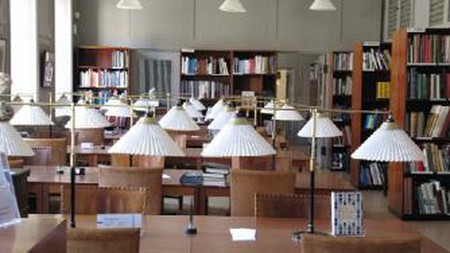 Arguably the father of modern Danish furniture design, Kaare Klint was a Danish architect and furniture designer whose style was epitomized by excellent craftsmanship, careful selection of materials, and a clean-lined approach to design. Completing his first piece of furniture in 1914 for the Faaborg Museum, he later went on to create furniture and fittings for a number of other museums, and from 1921 to 1926, he was responsible for converting the Frederiks Hospital into the Danish Museum of Art & Design. In 1924 he founded the Furniture School at the Royal Academy, which strongly influenced subsequent Danish designers such as Børge Mogensen and Poul Kjærholm. Always carefully considering every aspect of his designs, he researched everything from materials to the human body so as to ensure that his objects were functional and comfortable. 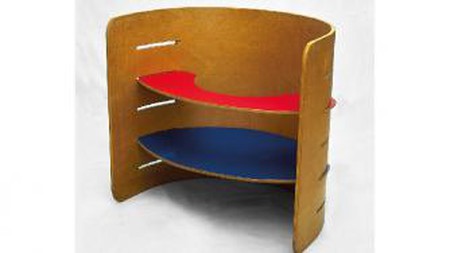 Industrial designer Kristian Solmer Vedel began as an apprentice cabinetmaker, which he completed in 1942. Following his apprenticeship, Vedel became a visiting student under Professor Kaare Klint from 1944 to 1945 at the Department of Furniture Design at the Royal Academy in Copenhagen. He went on to design furniture that was strongly influenced by both Klint and the Bauhaus. The designs that he created were highly inventive in their use of materials and were often multifunctional. A classic example of this is his adaptable children’s furniture that could continue to be used by the child as they grew up. Additionally, when turned over, it became a toy; this was arguably the first time that furniture had been designed specifically with a child’s needs in mind, as opposed to merely recreating adult furniture in miniature. 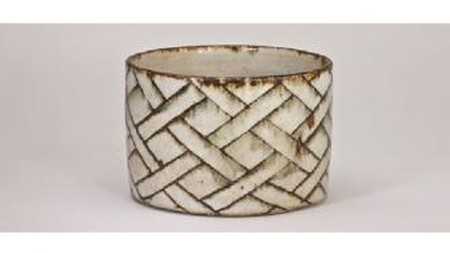 Coming from a long line of artists and ceramicists, Gertrud Vasegaard was a Danish ceramicist who has had an extensive and illustrious career. She was a designer for Bing & Grøndahl as well as the Royal Copenhagen pottery, and also had her own workshop. The granddaughter of the founder of the Bornholm pottery factory, Vasegaard began to decorate the brown, unglazed pottery straight after leaving school. She later went on to study in the ceramics department of the Arts and Crafts School in Copenhagen, whilst simultaneously working with a number of noted ceramicists such as Christian Poulsen and Arne Bang. Vasegaard created functional stoneware that was lightly colored and decorated in a simple manner, favoring geometric patterns. Perhaps her most famous work was her tea service designed in 1956 for Bing & Grøndahl, inspired by Chinese ceramics.