The 10 Best Danish Artists and Where to Find Them

Home to the prestigious Royal Danish Academy of Fine Arts and birthplace of the avant-garde art movement CoBrA, Denmark seems a potent breeding ground for producing talented and ground-breaking contemporary artists. Be it the political sculptures of Jens Galschiøt challenging global injustices, the haunting photography of Astrid Kruse Jensen or Morten Andersen’s abstract urban graffiti canvasses, here are ten must-see Danish artists to check on your next visit to Denmark.

Copenhagen-born and New York-based video artist Jesper Just is a graduate of the Royal Danish Academy of Fine Arts and a 2008 recipient of Sweden’s Carnegie Arts Award, which promotes Nordic contemporary art. He has gained international renown for his atmospheric, ambiguous short films which explore and subvert cinematic representations of gender and identity in mainstream Hollywood films. Much of Just’s early work challenged conventional ideas of masculinity as in No Man Is An Island II (2004), in which a motley crew of men, seated in a dingy watering hole, break into an oddly touching rendition of Roy Orbison’s Crying. Later works like ‘Intercourses’ (2013) — a site-specific installation Just exhibited when representing Denmark at the 2013 Venice Biennale — explores themes of architecture, memory and cultural disengagement, set in the Tianducheng neighbourhood of Hangzhou in China, a replica of Paris. 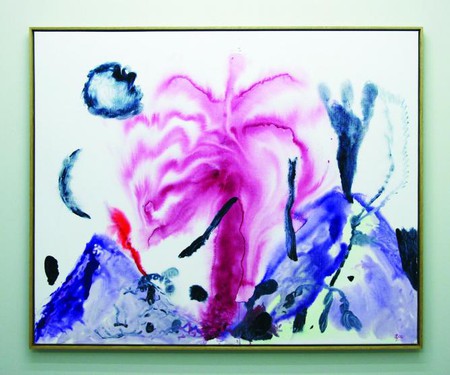 Art Gallery
Facebook
Email
Twitter
Pinterest
Copy link
Share
Map View
Anika Lori is a Danish-Italian mixed media artist represented by Copenhagen’s V1 Gallery. She grew up in the city of Aarhus and studied at the Fatamorgana Danish School of Art Photography before acting as assistant to the Israeli-born Danish painter Tal R for three years where she honed her talents and skills. Much of Lori’ work is based around collage; her pieces are colorful yet darkly surreal collections of symbols of pop culture, history and mythology put together with a punk DIY ethos. She has also turned her hand to unique site-specific works in unusual places including a café, DJ booth and a restaurant pissoir. The versatile artist, who has had her works exhibited in galleries in London, Paris and Berlin, often also works with paint and sculpture.

Aalborg-born visual artist Morten Andersen, who lives and works in Berlin, is a respected and well-known figure on the urban art scene. Born in 1976, Andersen is a self-taught artist who began experimenting with graffiti wall art during the 1990s and traveled throughout Europe, Asia and the US while he honed his techniques, and later shifted his art to canvasses. Described as urban abstract contemporary, with distinct influences from cubism and futurism, Andersen uses a mix of sprays, acrylic paint and markers to create his vibrant graffitied works. In 2013 the French publication Graffiti Art Magazine named him as one of 100 contemporary artists set to make waves in the urban art world.

Astrid Kruse Jensen, born in 1975 in Aarhus and educated at the Gerrit Rietveld Academie in Amsterdam and the Glasgow School of Art, works primarily with photography that explores the borderlines between imagination and reality. Kruse Jensen’s work is included in a number of public collections including Copenhagen’s National Museum of Photography and the UK’s Manchester Art Gallery. In 2008 she was the recipient of the prestigious Niels Wessel Bagge’s Foundation for the Arts Award. Her first solo exhibition, Imaginary Realities (2004), like much of her photography, was shot at night using on-location natural and artificial lighting and long exposure to capture normally busy places in the still of the night, adding an enchanting yet eerie element. Later works, like ‘Disappearing into the past’ (2010), which explored memory construction, were shot using a Polaroid camera, diffuse daylight and overexposure resulting in a hazy, dreamlike quality. 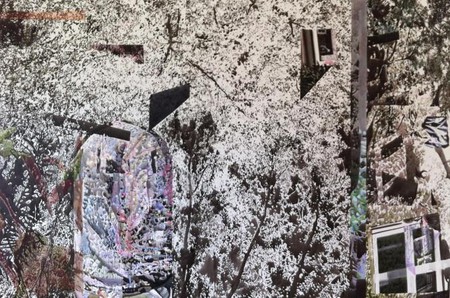 Born in 1971, Christina Malbek lives and works in Copenhagen and, along with Jesper Just, was a 2003 graduate of the Royal Danish Academy of Fine Arts, and has since exhibited at contemporary art galleries including Sweden’s Göteborgs Konsthall and her hometown’s Den Frie Centre of Contemporary Art. Malbek creates inventive large-scale landscape paintings using modern techniques including digital media and airbrush graffiti, giving the age-old medium of landscape art a fresh and contemporary relevance. Using her own photography as a starting point, Malbek then digitally manipulates these images before projecting them onto canvas which she paints, resulting in fragmented and disjointed works that take the traditional tranquil beauty of landscape art and interweave it with a disquiet and complexity. 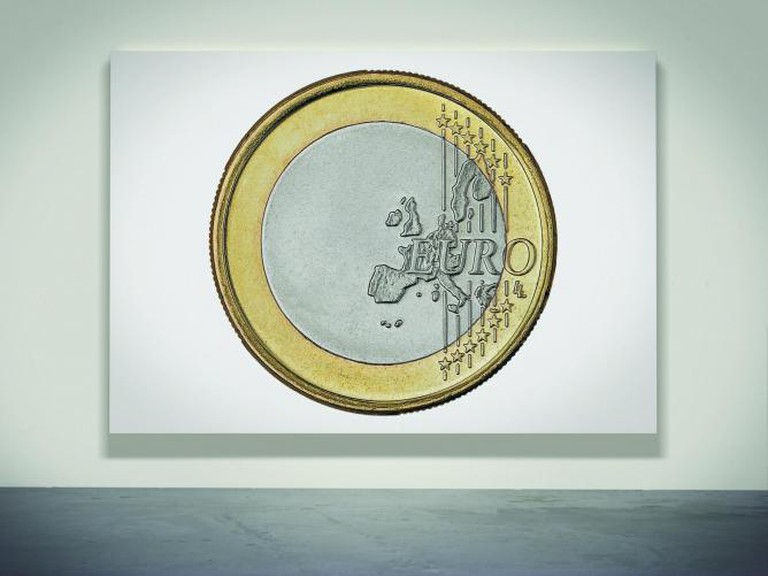 SUPERFLEX, EURO, 2012. | Courtesy of Nils Staerk
Sculptor Jens Galschiøt rose to fame both in his homeland and internationally for his politically provocative creations that seek to expose global injustice. His work is best viewed at his very own Gallery Galschiøt in Odense, which offers the unique experience of viewing the artist himself at work in his studio, and a number of his prominent sculptures can be found in the gallery’s exhibition spaces and sculpture park. Galschiøt is perhaps best known for his Pillar of Shame (1996 – 2000) sculpture series which were erected at sites of political significance to remind people of shameful historical events, and The Hunger March (2001), 27 bronze sculptures of starving African children which he has exhibited at several public sites to protest against hunger and social injustice. Both works are on display at Gallery Galschiøt’s sculpture park.

Founded in 1993 by artists Bjørnstjerne Reuter Christiansen, Jakob Enger and Rasmus Nielsen, SUPERFLEX is a Copenhagen-based art collective whose work comprises a series of projects that meet somewhere between art, design, commerce and a redefinition of economic and political relationships. Within a few years of forming, SUPERFLEX won the 1997 International Association of Art Critics Annual Prize for Denmark, which recognizes significant contributions to Danish art, and today their work appears in public collections at New York’s MoMA and the FRAC Nord-Pas de Calais in France. SUPERFLEX’s works include Euro (2012), a billboard depicting a digitally doctored Euro coin devoid of its monetary value, and film Flooded McDonald’s (2009), in which an exact replica of a McDonald’s is gradually flooded with water, linking the activities of global corporations with pressing environmental issues.

Danish-Icelandic artist Olafur Eliasson was born in Copenhagen where he graduated from the Royal Danish Academy of Fine Arts in 1995. Eliasson works with sculptures and large-scale installations that ingeniously employ different elements like water, light and air to immerse the viewers’ senses in his work. Eliasson often works collaboratively with specialists to create certain pieces as with The Mediated Motion (2001), an installation created with landscape artist Gunther Vogt which led viewers through landscapes of water, soil and fog and filled all four floors of the Kunsthaus Bregenz where it was exhibited. The 2014 recipient of the prestigious Eugene McDermott Award in the Arts other works include The Weather Project (2003), a popular exhibition in which Eliasson recreated mist using humidifiers and a sun using hundreds of yellow-colored bulbs that attracted a million visitors.

Art Gallery
Facebook
Email
Twitter
Pinterest
Copy link
Share
Map View
Copenhagen-based sculptor and installation artist Søren Jensen, a former rector at the independent visual arts school Funen Art Academy and 2004 recipient of the Eckersberg Medal awarded by his alma mater the Royal Danish Academy of Fine Arts, creates pieces that explore the function of sculpture in postmodern society. By taking familiar, commonplace objects and stripping them of their function he highlights their aesthetic qualities instead, as with ‘Profan Kano’ (2010), a boat with colorful bunting in place of sails – pretty but devoid of its function. His later work examines the relation between show and art as in his latest exhibition Profane Theatre (2014), an installation comprised of costumes, hand puppets, masks and a video playing a theatrical piece that is in itself a performance.

Born in 1985, Jacob Dahlstrup is a Copenhagen-based artist and recent graduate of the Glasgow School of Art’s Bachelor of Fine Arts programme. A current member of the Danish Visual Arts Association, Dahlstrup has only been exhibiting his work since 2008 but has already presented his art across Denmark and in the UK, France and New York. Dahlstrup creates sculptures and highly detailed drawings, the latter using graphite pencils on paper that he embosses by hand sometimes employing a tattoo needle to produce his intricate images. Influenced by traditional tattoo culture, his work has often featured a maritime theme with seafaring captains, ships and skulls predominating, while other pieces like ‘Home By The Sea’ (2014) and ‘Lost In Space’ (2013) depict surreal and imaginative seascapes and moonscapes that evoke exploration of the vast unknown.

See a map of the above galleries >>