'Dreaming Murakami', How Translation Can Save the World 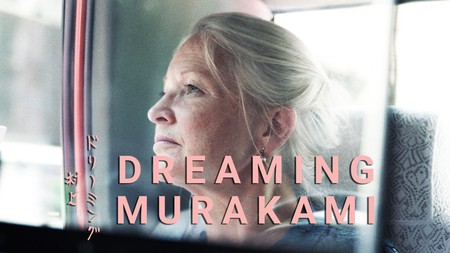 It was surreal, watching a Danish documentary with English subtitles, about translating Japanese. How many filters can art pass through, before its meaning gets distorted and twisted beyond recognition? Nitesh Anjaan’s film Dreaming Murakami is told through the eyes of Mette Holm, who has been translating Haruki Murakami’s works into Danish for nearly twenty years. The film is many things at once; an exploration of the dream-like quality of Murakami’s writing; a meditation on the artistic – and deeply solitary – practice of translation; a biography of Holm’s path towards her lifelong vocation. But it works. The film is surreal, melancholy, inspiring, fantastical – ingredients we so often encounter in Murakami’s works themselves.

Translation is currently having its moment in the artistic space. So often considered as secondary to the writer’s original text, ‘the poor cousin of literature’ as Mark Polizzotti describes in his new book Sympathy for the Traitor, more is being done to elevate the translator to the level of co-creator, and to recognise translation as of equal artistic worth as original writing. The TA First Translation Prize – set up by Daniel Hahn in 2017 and backed by the British Council – awards debut translators and editors for translated works of fiction and is the first of its kind to bring these traditionally background players centre stage. Meanwhile, Han-Kang gate, the furious debate surrounding Deborah Smith’s allegedly ‘mistranslated’ translation of Han Kang’s Man Booker prize-winning work The Vegetarian, has helped to shed light on the artistic challenges and complexities of rendering original writing in another language. There is of course, no such thing as a perfect translation. 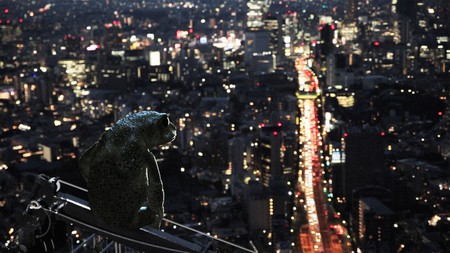 Dreaming Murakami deals with the idea of the translator as an unsung hero through metaphor. At the beginning of the film, we find ourselves following the heavy, lethargic plods of a giant frog in an eerie forest. He tell us, in deep, reverberating tones: ‘When a big frog like me appears – and asks you to believe in me – it must understandably be very difficult. But I really need you in the fight against Worm.’ The frog reappears throughout the film, following Holm in a Tokyo subway station, at a prize-ceremony in Copenhagen, looking out over the Tokyo skyline, each time asking for help in the battle against Worm.

The struggle of benevolent frog versus hateful worm is taken from Murakami’s short story ‘Super-Frog Saves Tokyo’, in which an ‘ordinary’ bank lender is asked to help a giant talking frog in the fight against an underground worm, to save Tokyo from a devastating earthquake. In response to the bank lender’s understandable response of ‘why me?’, the frog replies: ‘Because, Mr. Katagiri, Tokyo can only be saved by a person like you. And it’s for people like you that I am trying to save Tokyo.’ Translation is not battling against natural disasters, but it is fighting an important battle, against isolationism, inwardness, ignorance. Just as Mr. Katagiri must aid the frog in preventing an earthquake, translators must quietly, unceremoniously struggle to bring understanding, unity and empathy to the world – a task of equal, worldly significance. As Holm says: ‘We can’t live without translation. Not at all.’ 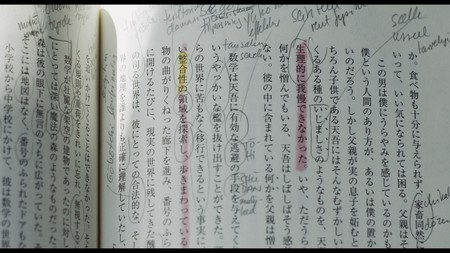 Translation requires a vast amount of background cultural knowledge. It is a fundamentally interpretative art, and one that requires sensitivity to nuance, an appreciation for ambiguity, and linguistic flexibility. This is not an exercise in crunching numbers and balancing equations. Translating Japanese literature specifically, requires an even greater level of sophistication, such is the language’s proximity to a more numinous, mystical world, or what the documentary describes as ‘a parallel universe’. As Holm says: ‘The two worlds overlap more, because Japanese is more fluid than Danish – so it can be a struggle when translating, to retain that… invisible border that you keep crossing.’

No writer is more skilled in exploiting this invisible border between the real and the imaginary than Murakami himself. As Holm discusses translating the writer with a fellow Norwegian translator, she speaks intimately on ‘Murakami moments’ in his works, when ‘you have a totally normal conversation, and then a snail crawls by, or… In the middle of a normal reality, something extraordinary happens.’ In harmony with this idea, the film is sprinkled with images of borders, train stations, airport gates, passageways into a parallel realm. It is in these moments, in these liminal spaces, that Murakami’s poetry can be communicated most directly. Most memorably, as we travel across the magnificent Øresund Bridge in Denmark, the moon hovering in the sky, we hear the frog call out to us once more, saying: ‘It’s important we understand each other… because this is a serious matter. Only if we believe in our dreams – we can fight Worm.’ Only by allowing both the real and the imaginary to coexist, we are told, can we conquer life’s inevitable trials. 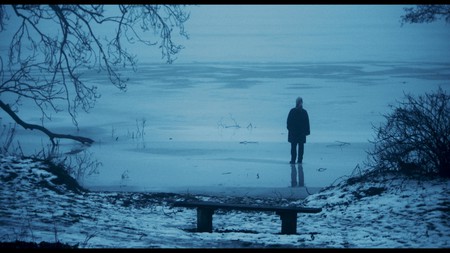 A subject matter as abstract as this must be grounded by a central character, and Mette Holm’s unaffected charisma provides a nuclear point around which the film can rotate. She is porous, enough to let us into her internal world, but private, enough to maintain an authenticity and seriousness to her character and to her craft. We are invited in to witness the act of translation in process; the endless deliberation over a word, the consultation of other translators, the need to brush up on esoteric vocabulary. In one scene, Holm consults a pinball machine expert to understand the difference between spinners, slingshots and and thumper bumpers while translating Murakami’s debut novel Hear The Wind Sing. Translation is not merely an intellectual process, but an embodied one. Feeling privileged to witness her mastery in motion, we take even greater joy in moments when the curtain is pulled back and her humanity can shine. To the tune of Roy Orbison’s rockabilly hit ‘Lana’, drinking whisky in a Japanese bar and record store, Holm’s stony veneer is broken by the slightest of dances and a beaming smile on her face. We sense she is where she needs to be, which is precisely where Murakami needs her to be too.

Quite predictably, the frog returns at the end of the documentary to update us on his quest against Worm. Once more, he croaks: ‘Thanks to you I could fight Worm. We used all the weapons we could get our hands on. We succeeded in harming Worm – but the battle isn’t over.’ Quite unpredictably, it leaves us with an altogether different thought to ponder. Words are indeed weapons, and they can be used to harm as easily as they can be used to do good. As the frog drifts into the blurry border between here and there, between the real and the imaginary, I was left with a feeling that words should be cherished, used deliberately, responsibly – for they are a serious matter.

Dreaming Murakami is produced by Danish production company Final Cut For Real, and is showing in select cinemas across Europe this year.