10 Danish Musicians You Need to Know 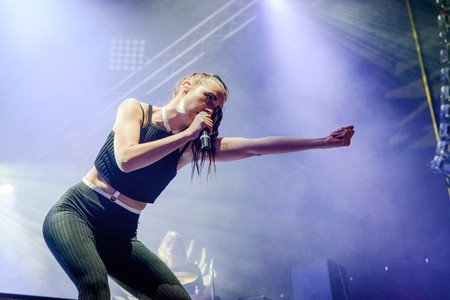 In case you haven’t heard already, Denmark has a strong music scene which – especially over the past few years – keeps getting bigger, with upcoming Danish artists rocking the national and international music scene. This article presents the best pop artists, punk groups, electro producers and rock bands of the 2000s.

MØ is probably the most famous Danish singer at the moment, and chances are you’ve at least once danced under the sound of ‘Lean on’ which, as of April 2017, had gained over 2 billion views on Youtube. When the 29-year-old Karen Marie Aagaard Ørsted under the name MØ released her debut studio album in 2014, the international music scene welcomed her with favorable reviews, and her European and United States tour was a great success. The same year she appeared on the Jimmy Kimmel Live show, performed with Iggy Azalea on Saturday Night Live and won four awards at the Danish Music Awards. Not bad for a newcomer, right? MØ is trying to combine her love for punk and pop music in her style and sound, and that’s what makes her stand-out among from other pop stars.

Another internationally renowned name originally comes from Denmark. Electronic-music producer Anders Trentemøller. Even if the name doesn’t sound familiar, you’ve certainly listened to some of his most popular electronic remixes. His succesful career in the music scene started in the late ’90s, and over these 20 years he has remixed songs of Franz Ferdinand, Depeche Mode, Röyksopp, UNKLE, Moby and The Knife. In 2007, he created a band with the Danish fashion designer Henrik Vibskov on drums and Mikael Simpson on guitar. Together, they’ve performed in several festivals, including Glastonbury, Roskilde and Melt.

When Iceage formed their band in 2008, the oldest of the four members was just 18 years old. Influenced by the punk scene of the ’80s, Johan Surrballe Wieth, Dan Kjær Nielsen, Elias Bender Rønnenfelt, Jakob Tvilling Pless make loud and fast punk music. For a country focused on pop artists, Iceage came as a surprise for the audience and the critics. Before attending one of their shows, be prepared to get pushed and showered with beer; you’ll also dance a lot. Iceage has released four albums so far.

The electro-pop quartet, When Saints Go Machine, was formed in 2007, and two years later released its debut album Ten Makes a Face. Influenced by the ’90s rave, but also dance and funk scene, their songs are characterized by a strong synth-pop sound combined with a funky mood. They have released three full albums, including Infinity Pool in 2013.

The Anglo-Danish band Off Bloom was formed just two years ago and has already impressed the music critics, and their audiences in London and Copenhagen keeps getting bigger. Inspired by the Glasgow electronic scene, the ’70s Krautrock and pop music, Off Bloom’s sound is a blend of these genres and has been described as ‘deconstructed pop at its best’. Their live performances are an unforgettable experience.

Nanna Øland Fabricius – or, as she’s known in the music scene, Oh Land – is a Danish songwriter, singer and record producer who currently lives in New York. When Amanda Ghost, the songwriter of You’re Beautiful and Beautiful Liar, and president of Epic Records at that time, saw Oh Land’s gig at SXSW in 2009, she instantly signed a contract with her, and Oh Land’s officially entered the music industry. Since 2008, she has released three more albums, some of which are produced by herself at home. Her sound is a mix of synth pop, indie pop and electronic, and her lyrics are inspired by her own experiences.

Those who like electronic music are certainly familiar with the name Kasper Bjørke. The Danish record producer, DJ and remixer started making music back in 1999 when he and Tomas Barfod formed the disco house duo Filur. Some years later, while Filur was still an ongoing project, Bjørke decided to start producing music under his own name. His first solo album In Gumbo, released in 2007, was only the beginning of a long and successful career. The combination of rave rock, disco, kraut, house, techno and electro make it impossible to not be won over by his sound. Those who enjoy late-hour DJ set will find Bjørke at some of the most popular venues in New York, London, Copenhagen, Paris and other countries all over the world.

With their heavy guitar riffs and screeching vocals, Lola Hammerich, Benedicte Pierleoni and Andrea Thuesen, the members of Baby in Vain bring the original sound of the ’90s grunge music into today’s music scene. The Copenhagen-based, noise, garage girl trio was formed in 2010 when none of the three was over 18 years old. Since then they’ve already performed in Roskilde, joined The Kills for two tours, supported Ty Segall and Thurston Moore’s band Chelsea Light Moving.

Volbeat like to experiment and combine different genres of rock music, and the result is a mix of rock ‘n’ roll, rockabilly and heavy metal. Since 2001, the band has released six albums, all of them certified gold. They have supported Metallica, Megadeth and opened the Roskilde Festival in 2007.

Farveblind is a fresh electro producer duo from Northern Denmark that, with its heavy acoustic drum beats and high pitched synths, takes over the stage and makes concerts feel like an endless party that lasts until the wee hours. Drawing inspiration from artists like Nicolas Jaar and Moderat, Jens Asger Lykkeboe Mouritzen and Magnus Pilgaard Grønnebæk produce their own unique sound which is a blend of acoustic and electronic elements.