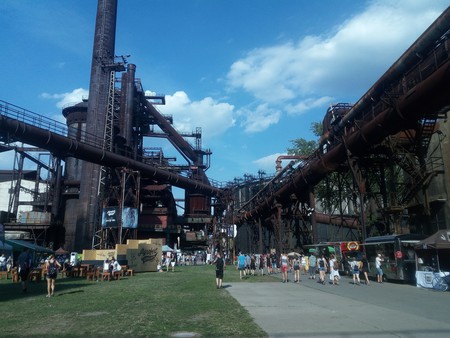 Standing 78 metres (256 feet) above the rusting remains of the Dolni Viktovice Iron and Steel Works, narrow platforms over vicious-looking drop-offs take visitors around the most breathtaking of aerial walkways. It’s a shaky stroll around the substantial remnants of a defunct blast furnace, and below is a ferric vista: the disintegrating former hub of the Czech city of Ostrava, a place that’s long found hard industry at its heart.

The Viktovice region’s core industrial site is colossal. Filling an area of several square kilometres, its soaring chimneys, extensive walkways and monstrous factories are a photographer’s paradise, a kind of post-apocalyptic world where – without looking closely – it feels like humans have walked away and simply let things slowly begin a slow crumble into dust.

There are thick pipes that hang overhead, stretching for miles around the site. In one corner, the remnants of a train – now doing little more than holding its shape as it blisters with rust – is being slowly enveloped in the grass. Soaring towers still contain intimidating safety ladders, and huge conveyor belts trail for hundreds of metres out of crumbling buildings. 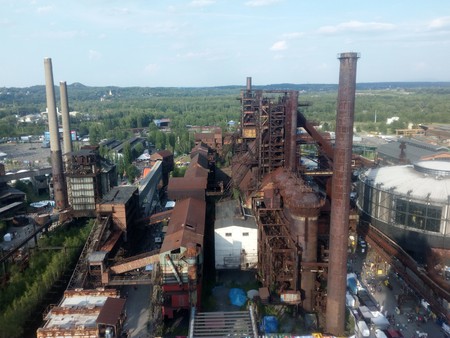 Ostrava – the Czech Republic’s third largest city – has a history that revolves heavily around mines. This spot, just 15 kilometres (9.3 miles) south of the Polish border, was little more than a village when the potential of its underground resources was discovered. After coal mining was established in the late 18th century, the region quickly became one of the area’s most important. It can lay claim to tennis star Ivan Lendl and was once the home of Oskar Schindler (the subject of the movie Schindler’s List, a saviour of hundreds of Jewish lives during Nazi rule), but metal and flammable rock are what really matter here.

The industry survived World War II, its factories coated in a sloppy covering of paint to avoid detection as bombers swooped overhead. Soon afterwards, the Czech Republic fell under Soviet control, and these factories became still more critical to the area’s development. Shortly after the fall of the Soviet Union in 1989, however, the mines, factories and surrounding industry – places that presented tough working conditions and left a thick smog over the city – started to shut down. Viktovice, the only spot in Europe to complete the entire iron production process in one place, was the king of industry, even in this heavily industrialised town. 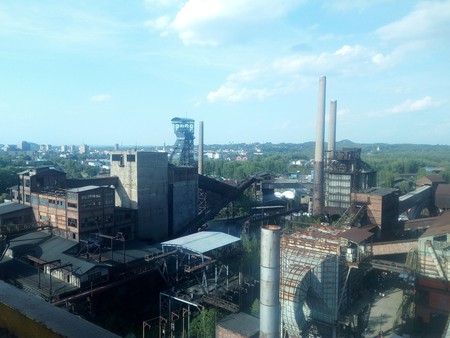 The Viktovice Iron and Steel Works themselves hung on until 1998 when the last iron flowed out of the site’s mammoth furnaces. One of Ostrava’s most impressive achievements is the reinvigoration of the spot that’s taken place since.

Perhaps the best use of the site is in the annual music festival Colours of Ostrava, which relocated to Viktovice in 2012 after outgrowing its previous home. The festival utilises its ferric backdrop, with stages tucked among the warehouses and crammed between the pipes. While many of Europe’s biggest rock and dance acts perform over the course of four days, a number of the site’s normal attractions remain open to punters, who can drink atop the Bolt Tower or explore Viktovice’s art.

For the festival, light installations and abstract carvings take root in the darker reaches of the factory walkways, while two of the site’s more prominent chimneys become home to flickering neon dancers as the sun goes down. Moody underlighting, a penchant for dingy beats and a late-night schedule all help create a festival with a broad genre outlook, which nevertheless feels like the rave at the end of the world. 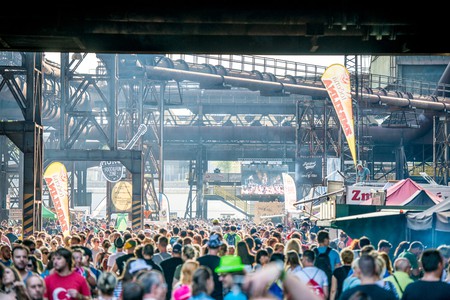 There are other attractions to be had here year-round too. Aside from the tours and the playful wine bar at the top of Bolt Tower (named for the Jamaican Olympic sprint champion Usain Bolt, who has signed the wall and said to be a fan of the city), Dolni Viktovice also hides a 1500-seater auditorium located in a former gasometer, a startling climbing wall and an interactive science and technology centre.

The city itself, though, continues to struggle. Lacking the grace or beauty of Prague or Brno, some would argue this is a look at a more authentic Czech Republic, almost free of tourism and clearly lacking the accompanying wealth. The heroes here are miners and steel workers; strong working-class men whose statues fill the squares and line the footpaths. Nearly 30,000 Czechs (10% of the city’s population) have left Ostrava over the last decade, moving on as its transition into areas such as nanotechnology slowly replaces the tough roles of the past.

Dolni Viktovice is not the only preserved industrial site in the area. The remnants of coal mines and the century-old steam engine at Dul Michal, and the underground experience at Landek are twists on a theme, but on a far smaller scale. The soaring, explorable monstrosity at Viktovice, though, holds a unique doomsday beauty in its raw underbelly. It’s a throwback, a poignant relic, and a sight to behold.