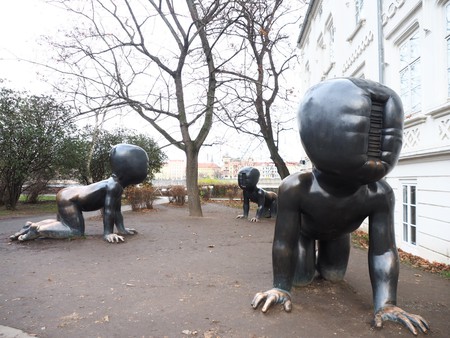 Beneath Prague’s mystical bridges, castles and gingerbread houses lies a dark political history that is often forgotten. Nothing better encapsulates Prague’s troubled past than Czech artist David Černy’s scattered artworks. Each piece is not only aesthetically appealing, but will also have you questioning your own understanding and beliefs of how politics shapes society.

Černy is one of the Czech Republic’s most controversial contemporary artists. He first made headlines in 1991 when he painted a Soviet tank in central Prague bright pink, intending it to serve as his own war memorial. As the tank was already a national monument for the Soviet Tank Crews, Černy’s act of civil disobedience was immediately deemed ‘hooliganism’ and led to his arrest. This didn’t stop Černy, and he continued to create thought-provoking works of art throughout Prague. Searching for the pieces of Černy’s political jigsaw puzzle isn’t an easy task, so we’ve listed his major pieces below to help start your treasure hunt for Prague’s most outspoken artist.

The hilariously salacious Proudy always guarantees a giggle for viewers. Two bronze men stand opposite each other ‘urinating’ into a shallow pool. What might appear to be just a vulgar piece of art actually has a clever backstory. The hips of these statues, which move as they urinate, are spelling out quotes from famous Czech literary figures. And it’s not just a shallow pool they are peeing into: it’s the outline of the Czech Republic, so essentially they are urinating on the country itself. 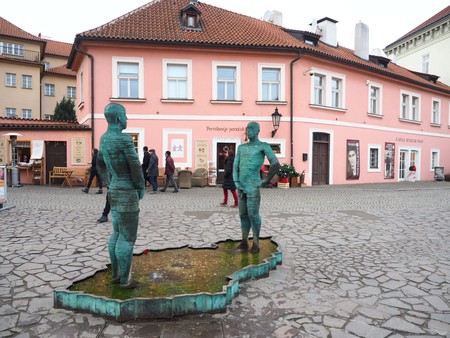 You can spot these larger-than-life babies in two locations around Prague: at the Zizkov Tower and in Kampa Park. These creepy-looking babies are a symbol of the Communist era and how the totalitarian rule stifled their ability to reach adulthood. 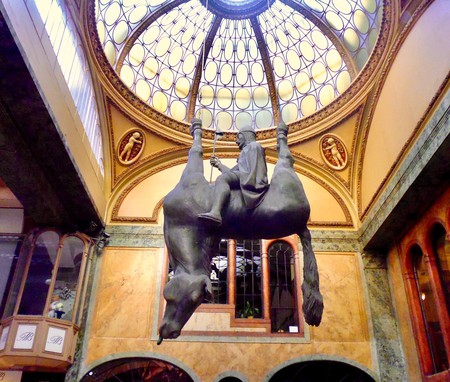 Dangling high above eye level in Prague’s Old Town is a sight that will make you look twice. A sculpture of Sigmund Freud hanging from a metal rod over the street below is said to be Černy’s answer to the role of intellectuals in the 20th century. Freud appears to be about to fall to his death, which illustrates Černy’s uncertainty about the survival of intellectualism in the future.

Like I said in my last post, the art in Prague is something else. My favourite pieces were the cheeky but thought-provoking sculptures by David Černy. We spent a fair bit of time searching the city for his work which proved to be a little tricky to find! This guy was hanging above our heads about a block from where Google maps was sending us. . . The thing I like about Černy’s work is his humorous and controversial interpretations of events that are still relevant today. Take this one for example, it’s supposed to be Sigmund Freud dangling to his demise to show Černy’s uncertainty about intellectualism in the 20th century. Fast forward to 2017 and this is more relevant than ever. In a world where we really on technology to do everything for us, it looks like Freud won’t be able to hang on much longer. . . That’s just my thoughts anyway. Have you guys seen any thought-provoking art that has really resonated with you?🧐 . . On a less serious note, how good are the new emojis!! 🤩 (there’s broccoli!🥦) #černý #praguestagram #atlasobscura #wonderful_prague . . . . . . . #wunderlust #travelstoke #teamkaptainkenny #traveleroftheweek #igersprague #ichosetowander #instaprague #olympusomd #olympuscamera #praguelife #girlsborntotravel #visitprague #streetartlovers #streetartdaily #thediscoverer

Hard to spot and perhaps hard to interpret, the gooey-looking Embryo is Černy’s metaphor for the difficulties of creating art in a narrow-minded world. This piece is illuminated at night, making the unusual sculpture even weirder. 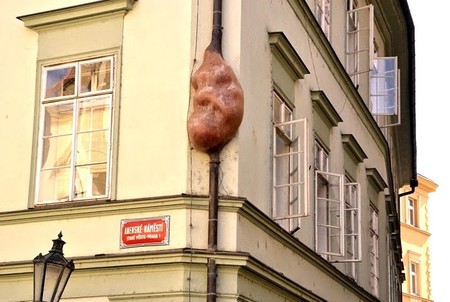 Crude and sassy but absolutely hilarious is the best way to describe this sculpture, where Černy packs a serious punch to the egos of Czech politicians. This larger-than-life sculpture depicts two humans bending over with ladders leaning against their backsides. If you climb a ladder, you can poke your head inside and see the former Czech president and former head of the National Gallery spoon-feeding each other to Queen’s ‘We Are The Champions’. It’s a supposed metaphor for Czech politics, but could certainly be applicable worldwide. 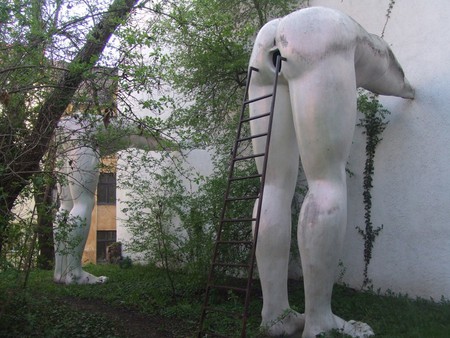