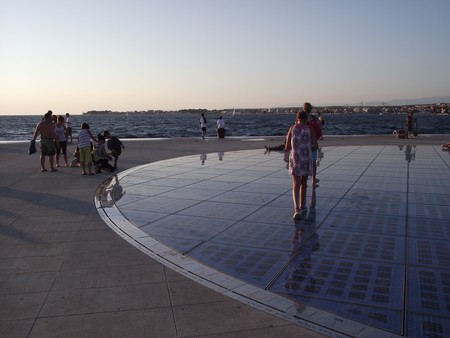 Greeting to the Sun | © Fred Romero/Flickr

Of all the 21st-century attractions that have transformed Zadar into a thriving tourist destination, the most unusual are the Sea Organ and the Greeting to the Sun. Public art installations created by Nikola Bašić, they have enlivened the city waterfront in the most radical yet entertaining way.

Hearing is believing. As you stroll along the Obala kralja Petra Krešimira IV, Zadar’s western embankment, towards the end of the peninsula that contains the city’s historic centre, your ears catch the strangest sounds floating in the air.

As you approach them, you also notice a gaggle of people sat on the steps lapped by the sea, even lying down alongside, seemingly around some unseen point of interest.

The point of interest is the Sea Organ, a mysterious communal installation created by artist Nikola Bašić. Comprising 35 pipes fitted into the pavement, the Sea Organ emits unworldly noises whose tone and strength are powered by the waves. 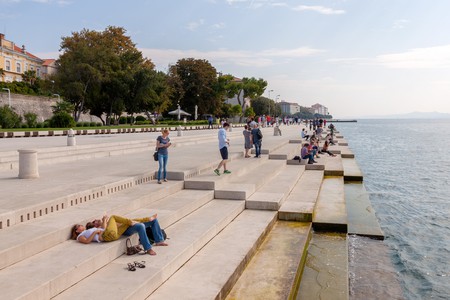 Such has been its success that Bašić then devised another piece nearby, the Greeting to the Sun, this one very much visible with its colourful structure of 300 solar-driven panels. Both have one thing in common: nature. Without the sea or the sun, neither would work.

If anything though, the most extraordinary thing about these works is that artist convinced the Zadar authorities of their value to promote local tourism. Other cities might well have opted for a statue or a monument of some kind.

Nikola Bašić was born in Murter, just south of Zadar, where he went to school. A graduate of Architecture and Urbanism, Bašić won the commission to design an installation that would greet passengers when Zadar opened its new terminal for cruise ships on the peninsula waterfront, right in the heart of town.

Persuading the powers that be that a soundscape with strong connections to the sea would be the solution, Bašić got to work inventing the Sea Organ.

With the help of experts in sea hydraulics and organ pipes, he and his team built both the tide-driven instrument and their casing, a set of steps leading down into the water.

Both the cruise terminal and Sea Organ were unveiled on the same day in April 2005. An initially skeptical public were soon won over and with the groundbreaking impact of the Garden Lounge music bar further round the waterfront, ever more foreign visitors picked up on it too. 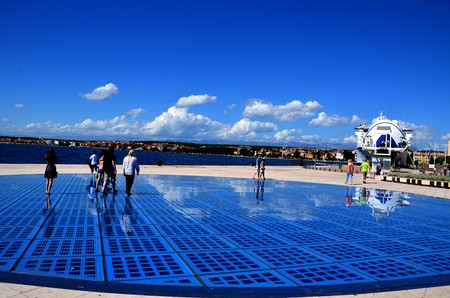 Greeting to the Sun | © Michael Pollak/Flickr

With a surefire winner on their hands, the city authorities duly offered Bašić another commission: the Greeting to the Sun.

Again set at pavement level, this 22 metres (72 feet) wide representation of the solar system is also driven by the sun. At dawn, the cells beneath glass panels slowly being to create enough electricity for the disc to illuminate. By the time comes for Zadar’s famously intense sunset, the cells have generated enough power to light up the waterfront.

The work is both a visual example of renewable energy and a nod at local history. Around the circle edge, the names relate to the astronomical calendar drawn up in Zadar in 1290, and discovered by chance at the Bodleian Library in Oxford in 1964.