How to Spend Seven Days Island Hopping Around Istria and Kvarner, Croatia 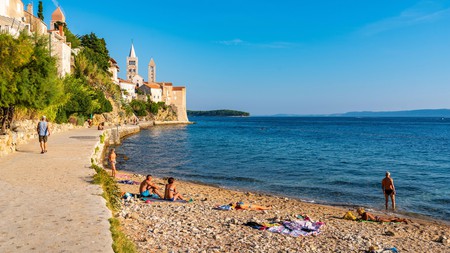 Istria’s verdant triangular peninsula is as rich with remarkable destinations inland as it is around the coastline. Its Brijuni islands are unlike any other island group in Croatia, and will leave you in no doubt as to why they were ex-Yugoslavian President Tito’s favourite summer retreat. Other highlights include the island of wellness, Lošinj, and Rab with its sandy beaches and connections to British royalty. Here we reveal the best way of exploring these Croatian gems, and much more, during a seven-day sailing itinerary.

Dip into Croatia’s most scenic spots by hiring a boat through Dream Yacht Charter. Alternatively, choose from dozens of charters in the area through SamBoat. 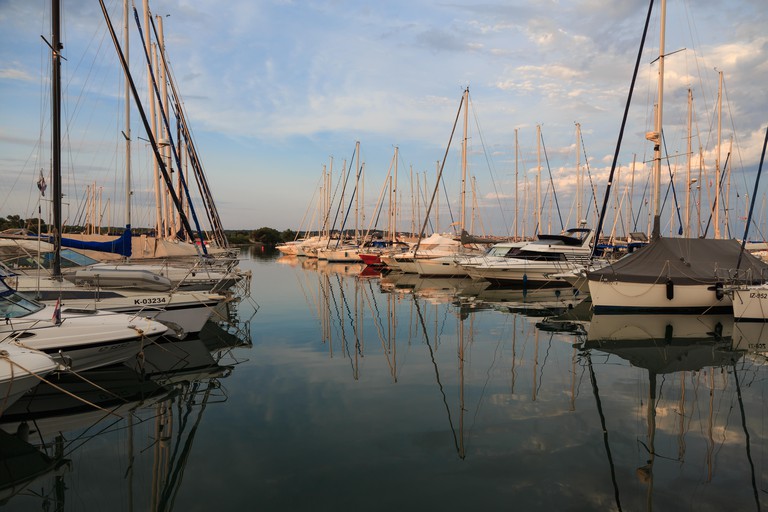 Enjoy the modern facilities at Pomer Marina | © anna quaglia / Alamy
Nestled deep into the expanse of Medulin Bay, ACI Marina Pomer is an ideal introduction to the lush green vegetation and indented coastline of Istria. This modern, 294-berth marina has a restaurant, swimming pool, pool bar and grocery store, in addition to all the standard facilities.

For your first overnight stop, we’re taking you to the Brijuni islands, the former Yugoslavian President Tito’s favourite place for entertaining world leaders and international celebrities. It’s a designated Nature Park so you will need to check in on arrival, pay a fee (included with the berthing or mooring fee) and observe the regulations designed to protect this enchanting archipelago for future generations.

There are only two permitted stopping places on the islands: Veliki Brijun, where you can berth or moor at the organised anchorage with buoys, or Uvala Sv Nikola (St Nicholas Bay), on the island of Mali Brijun. Once you’ve checked in, the National Park staff will help you organise your onshore itinerary: choose from golf, an organised tour, an electric car or bicycle trip, diving, kayaking, tennis and much more. As you explore, look out for a 1,600-year-old olive tree, Tito’s Cadillac, dinosaur footprints and the ruins of a Roman villa. 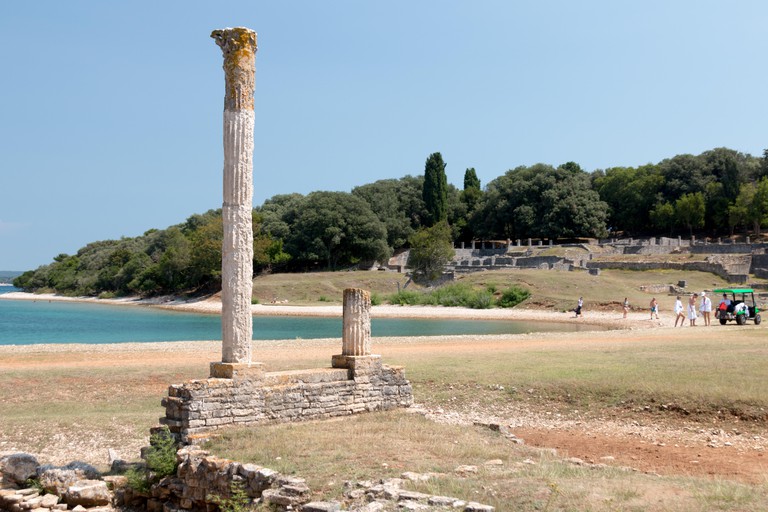 Explore the remains of a Roman villa at Verige Bay, Brijuni National Park | © Mattis Kaminer / Alamy Stock Photo
Though it’s a shame to miss the delights of Rovinj and other settlements further along the west coast of Istria, you’ll probably want to spend the morning in Brijuni, so it’s just a short hop today to Pula.

There’s another ACI Marina here, but the star attraction is the magnificent amphitheatre, often referred to as the Arena, built around the same time as the Colosseum in Rome. If you’re lucky there might be a concert, film or other event here in the evening, and there are weekly reconstructions of gladiator fights during the summer. It can accommodate up to 5,000 guests and the atmosphere, particularly at sunset, or when the arena is lit, is very special. Pula is rich with history, architecture, and diverse museums and galleries. For example, it’s the world’s largest amphora site, with over 2,000 amphorae discovered close to the Arena, and a permanent exhibition of some of them in the underground area there. 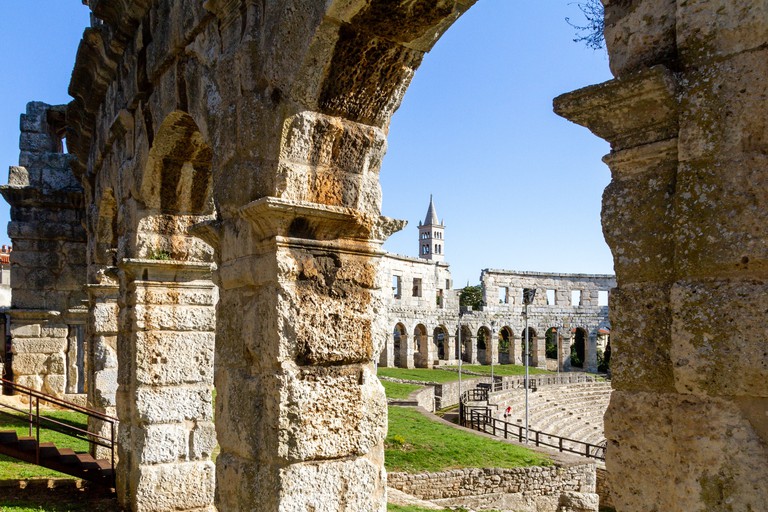 Pula's Roman amphitheatre remains impressively intact | © Dimitry Anikin on Unsplash
As you approach Mali Lošinj, don’t be tempted to pass through Boka Falsa, between Čikat and the south side of Koludarac islet. Boka Falsa literally translates as “the wrong way”, as it’s only suitable for the shallowest of boats. Instead, head around the north coast of Koludarac. Look out for dolphins as there is a relatively healthy community around the island under the watchful eye of The Blue World Institute, based in Veli Lošinj.

The island of Lošinj is one of Croatia’s most up and coming and has a long history of tourism, based on a location and microclimate that’s extremely conducive to good health. Mali Lošinj (Small Lošinj) is the capital of the island and, just to confuse the issue, is much larger than Veli Lošinj (Big Lošinj), further south. There are two berthing opportunities in Mali Lošinj’s deep bay: the town port, at the head of the bay, and Marina Lošinj near the entrance to the bay, which is probably a better choice if you visit in the height of summer and want a quiet night.

It’s a lovely town, buzzing with cafes, bars and restaurants, around a busy harbour. Perhaps its most unique feature, though, is The Museum of Apoxyomenos, dedicated to the bronze statue of a young athlete. Dating to the 1st or 2nd century BCE, but almost entirely intact after careful restoration over six years, the statue was discovered in 1997, 45m (148ft) under the sea, by a Belgian tourist. Before arriving at its permanent home in Mali Lošinj, it toured many celebrated international institutions such as the Louvre, the British Museum and the J.P. Getty Museum.

Another unusual attraction is the Garden of Fine Scents, which features over 250 species of wild aromatic herbs enclosed by traditional dry-stone walls, from where, on a clear day, you have great views over the bays of Lošinj, all the way to Mount Velebit. A professional guide will explain the medicinal properties and diversity of the island’s flora and herbs, and how this has contributed to Lošinj’s reputation as the island of wellness. 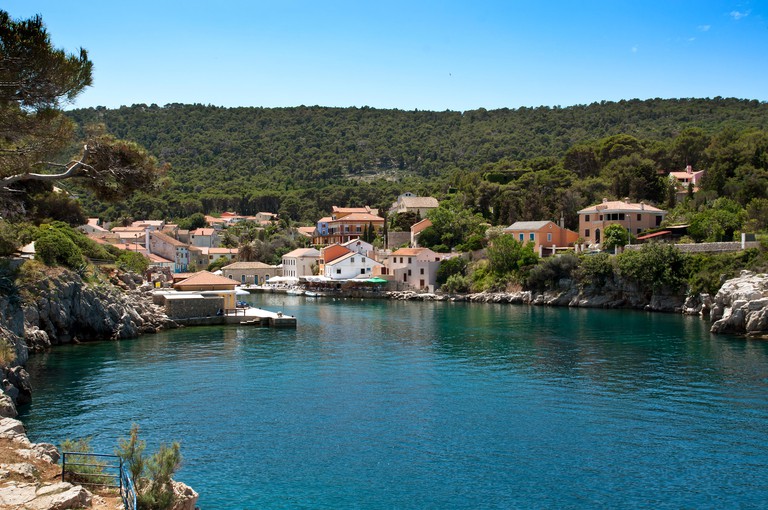 Uvala Sveta Eufemia is a large picturesque bay, just northwest of Rab town, with great views of the town walls and bell towers, especially during and after sunset. It is regularly used as an anchorage but is not fully protected in all weathers, so we recommend ACI Marina Rab for your overnight stay. Taking up most of the east side of the town harbour, it faces the old town and is a great place to watch the world go by.

Croatia’s many beaches are mostly pebble, but Rab town has more than its fair share of sandy shores, and even has a separate dog beach. It’s distinguished by its four bell towers, which are said to resemble the masts of a ship. The island has a long history of tourism – King Edward VIII and Wallis Simpson, not yet married to each other, were photographed in Rab town in 1936. Local legend has it that they were granted special permission to skinny dip in nearby Kandarola Bay, thus establishing naturist-friendly style of tourism in Croatia. 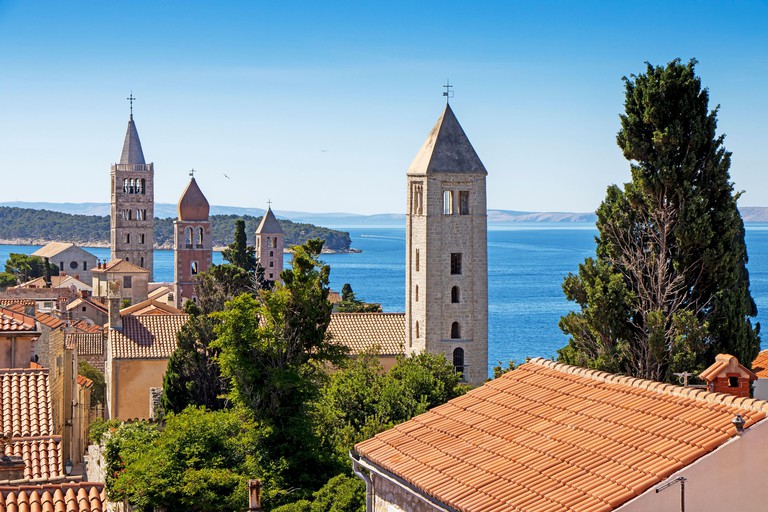 As you head north towards Krk island, you will observe a dramatic change of landscape as you go past long, thin Cres island. In a way it’s a microcosm of Croatia – lush green in the north and barren in the south. In fact Cres and Lošinj used to be one island, until the Liburnians dug a channel at Osor. Look out overhead for the rare griffon vultures that inhabit Cres.

Marina Punat is about 3km (2mi) from Krk town, and has a restaurant and pizzeria, as well as a hotel nearby. The city of Krk is dominated by the Frankopan family castle and the cathedral complex, the buildings of which span several centuries. The ruins of an ancient Roman thermae have been discovered in the grounds. The Frankopans, along with the Zrinskis, had perhaps the most significant influence on the history of Croatia as it struggled with the Ottomans, the Habsburgs and many others who wanted Croatia for themselves.

If you get a chance to go to Vrbnik, on top of the cliffs on the east coast of the island, it’s worth it simply for the spectacular views and the local white wine, Žlahtina. It’s also known as the cradle of Croatian literacy, and has a plaque erected to Blaž Baromić, who was born here, and founded the first Croatian Glagolitic printing house, in Senj, on the mainland. 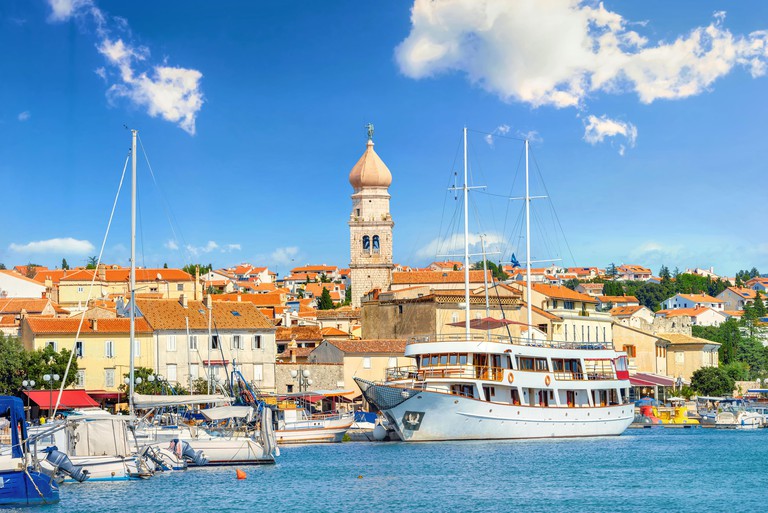 As you head to Opatija, you’ll get a good view of the major port of Rijeka, Croatia’s third-largest city after Zagreb and Split. ACI Marina Opatija is actually in Ičići, just south of Opatija, so we’re suggesting Marina Admiral, next to Hotel Admiral, for your overnight stop, where you can soak up the gentile cosmopolitan atmosphere of the town centre. Opatija is a sophisticated yet traditional resort town in the Habsburg style, popular with royalty and nobility a century ago. They stayed in grand villas and walked along the Franz Joseph I promenade, commonly referred to as the Lungomare, to take in the health-giving sea air, whilst admiring the views across the Kvarner Bay. The villas, Viennese-style coffee houses and Lungomare, stretching from Lovran to Volosko, are still there, and it’s just as popular now. It’s also known for its gastronomy, particularly in the Volosko area, a 15-minute walk north of the town centre. 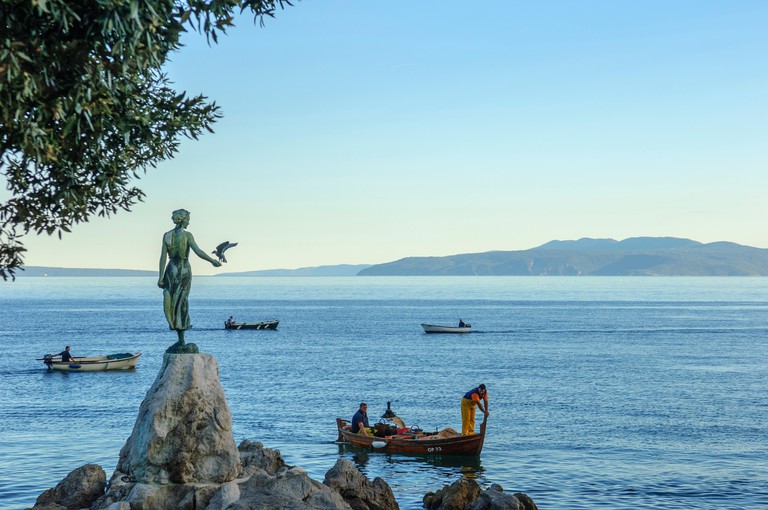 On your last day you might want to spend a bit more time in Opatija, but, if the weather is good, conditions are stable and winds are negligible, maybe a quiet bay with a good beach and lush green backdrop will make an ideal spot for a late morning swim. Prklog Bay, near the village of Sveta Marina, and almost halfway to your final destination, has few residents, but offers a lovely sandy beach popular with locals. The area around it – a triangle between Prklog, Labin and Rabac – is a designated Protected Landscape, both for the character of its bays and for the vegetation, which is a dense mix of holm oaks, pine forest and grassland.

Istria is the first point of arrival for nautical tourists driving from Italy, Austria and Germany, many of whom moor their boats here, so the coastline and islands are well served with marinas. Many immediately head south to Dalmatia, where there’s a greater number and variety of islands, and sailing distances are generally shorter. However, Istria and Kvarner reveal many surprises and hidden gems, with so much to see that we can only give you a taste of what’s on offer.

You’ll need the appropriate qualifications to skipper a charter boat yourself, and even experienced qualified skippers sometimes find they get more out of their trip by using a local skipper.

Croatia is taking much better care of its seabeds than it used to, with many anchorages now run as concessions with mooring buoys, where fees are payable. In more remote bays you will often find that restaurant owners have laid their own moorings, and if you use them you will be expected to eat at that restaurant. In National Parks, like the Brijuni islands and Mljet, there are regulations restricting where you can sail and stop overnight, and you will need to pay a fee to enter the parks. 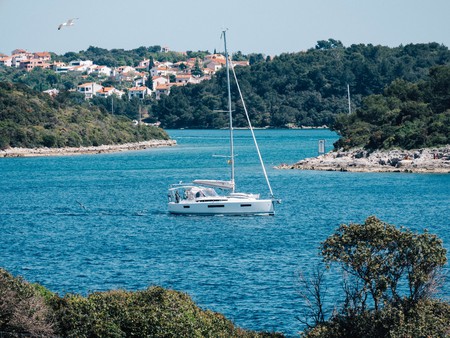 Istria is blessed with many natural harbours, like Pula Bay | Photo by Krzysztof Kowalik on Unsplash

The marina network is extensive and there are local harbours for smaller boats in most bays. Visiting yachts can often find space in the bigger town ports. In nearly all marinas, and most of the quays and ports that regularly accommodate nautical visitors, berthing is stern- or bows-to, on “lazylines” (lines attached to the shore at one end, which you pick up with a boat hook, and which run to a concrete block underwater behind where your stern will end up once you have moored) – a version of Mediterranean mooring.

Tides are negligible but the weather and winds in Croatia can change quite quickly, and this is an area where the respected bora wind, although thankfully rare in summer, can blow very strongly and arise quickly without warning. So where there is a marina ideally placed, we recommend that as an overnight stay, rather than an anchorage that may only be partially protected.

Discover the best Croatian islands by hiring a yacht through SamBoat or booking a sailing vacation with Dream Yacht Charter.