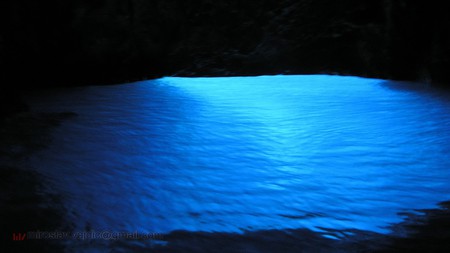 Remote Biševo provides the most striking and unusual natural wonder in a country renowned for its unadorned beauty. Admiring it requires a special boat trip from Vis, at a specific time of day and in a particular season. Fortunately, the nearby resort of Komiža is well prepared for the occasion.

If rugged Vis is the most far-flung of Dalmatia’s holiday islands, then its little satellite of Biševo requires an even greater effort to reach. Biševo would be a forgotten statistic, just another of 1,246 islands that stretch from Brijuni to Palagruža, were it not for a strange and stunning natural phenomenon that seduces boatloads of seasonal visitors to make that very effort on a daily basis: the Blue Cave.

Accessible only by sea, this limestone grotto contains an underwater opening that lets in the sun’s light as noon approaches during the summer months. The effect lasts for something over two hours, beams shooting through the water in magical fashion, bathing the cave in shimmering blue light. 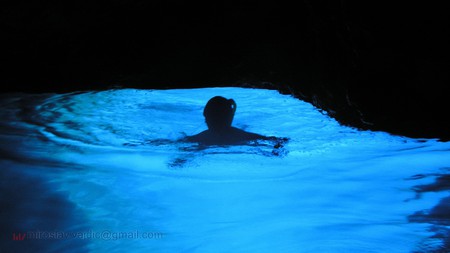 This is why every morning at 9.30am between June and September, more people gather than on the seafront at Komiža, Vis, for the trip to Biševo than the number of inhabitants at their destination, 15 at the last official count.

Discovered in 1884, the Blue Cave sits on the eastern tip of Biševo, conveniently across from the western coast of Vis where Komiža is the main resort. Home of celebrated lobster restaurants and the island’s most notable bar hub, Komiža is dotted with tour agencies that all offer day trips to Biševo, advertised on boards lining the harbourfront.

Vis, a closed-off military base until Croatian independence in 1991, came late to modern-day tourism. The popularity of Biševo is a relatively recent phenomenon.

Tours are also laid from the main resorts on Brač and Hvar islands, timed to reach Biševo after the optimum time of 11am. Boatlands of tourists shun breakfast for a whole day’s entertainment that also comprises lunch and an afternoon on the beach near the cave. It is increasingly rare to find companies who arrange a simple there-and-back deal for Biševo, even from nearby Komiža. All-day jaunts are the norm.

The big moment, of course, is the collective intake of breath when the boat reaches the mouth of the cave. The grotto is quite small, some 18 metres (60 feet) in depth and its entrance only 1.5 metres (five feet) high. Most feel the inspiration to dive in, a full-body splurge in God’s own light show, for as long as nature allows.