Marc Chagall And The City Of Vitebsk

Born to a Hasidic Jewish family in Vitebsk, visual artist Marc Chagall lived in a city located near to the border of Russia, in what is now known as Belarus. Home to a large Jewish population, his childhood’s experience of folkloric traditions profoundly affected his artistic career in his later life. 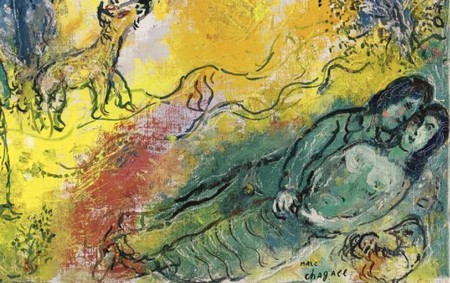 In 1906, Chagall left Vitebsk for St. Petersburg to study in the prestigious art school, where he met Bella Rosenfeld, and then later to Paris in order to pursue his artistic ambitions. The city, however, retained a strong hold on his imagination and emotions. Many of his paintings of Vitebsk were actually painted during his Paris years from 1910 to 1914. As he wrote in his autobiography, ‘The soil that nourished the roots of my art was Vitebsk’. He visited often as his fiancée Bella remained there which helped to intensify the romantic feelings and longing he held for the city.

Vitebsk, to him, was a uniquely whimsical vision, stating that ‘My homeland exists only in my soul’. He represented the city in a dreamlike, magical state, in which figures float through the air and fantastical human and animal hybrids dance across the canvas. He drew inspiration from his knowledge of Jewish motifs and his contemporary exposure to the Fauvism and Cubism that was spreading through the Parisian art world.

In 1914, he returned to Vitebsk intending to marry Bella and take her back to Paris with him. The advent of the First World War stopped him in his tracks when the Russian borders were closed, but his increasing art-world success gradually won him fame and financial security in his own country. After the October Revolution of 1917, Chagall was awarded the position of ‘Commissar of the Arts for Vitebsk’. The Mandate declared ‘Comrade Chagall has the right to organise art schools, museums, exhibitions, course, and lectures on art and any other artistic enterprise anywhere within the city and the region of Vitebsk.’