Why the Caucasus Has So Many 100-Year-Olds 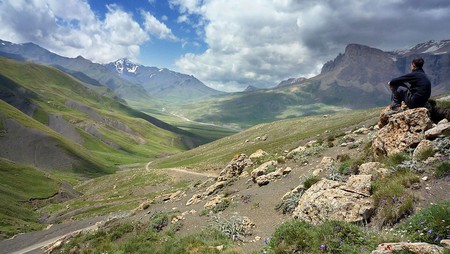 Meet Magomed Labazanov. Magomed came from Dagestan in the North Caucasus and saw the 18th, 19th and 20th centuries. In 2012 he died at 122 years old. Cases like this aren’t uncommon in the Caucasus. Culture Trip aims to find out why the people here seem to live so long.

The Caucasus Mountains have the highest proportion of centenarians, or people living longer than 100 years, in the world. Geographically, the region lies between the Caspian and Black Seas, sandwiched between Russia in the north and Iran to the south. According to many, the Caucasus has an unusually high number of healthy centenarians who seem to forget to die. And most of these incredible people are mentally and physically strong with a normal heart rate and blood pressure. They seem resistant, if not immune, to age-related health issues suffered by so many elderly people around the globe.

In the mountains and foothills, rural villages remain relatively unchanged for centuries. Perhaps a daily diet of cheese, fermented goat milk and yoghurt combined with a lack of alcohol and abstaining from smoking hold the answer. People also grow vegetables in their gardens without pesticides and eat fruit straight from the trees. The high concentrations of anti-oxidants, vitamin C and other minerals in these promote a healthy and robust body.

But millions of others have a healthy and proactive lifestyle. What makes the Caucasus different?

Perhaps the altitude plays a role. Scientific studies show that living in the mountains at high elevations tend to increase longevity. When oxygen levels are lower, the body produces more red blood cells and blood vessels. More red cells mean oxygen gets transported around the body faster. More blood vessels lowers the chance of a blockage that can cause a fatal heart attack or stroke. The air quality is much higher and free of pollution in the mountains too.

The secret to the famed longevity in the Caucasus probably results from a healthy and active lifestyle while living at altitude. Combine this with a probably genetic predisposition to longevity and you have a region with lots of centenarians.

Are the claims credible?

Stories in some villages claim living older than 100 is normal. But when the numbers range around 140 years and higher, it gets more difficult to accept. An example of this is Shirali Muslimov who, according to official records, died at the age of 168. Put in context, the oldest undisputed human lived to 122 years old.

Several factors make the claims murky. Few villagers recorded their births before 1920. A lack of undisputed records and scientific studies creates too much subjectivity to fully trust the outlandish claims.

Despite this, one thing’s for sure: the centenarians in the Caucasus do live longer and healthier and have fewer age-related disorders compared to the rest of the world. As Shirali Muslimov once said: ‘At that age, what difference does 20 or 30 years make?’