The Most Instagram-Worthy Spots in Baku, Azerbaijan 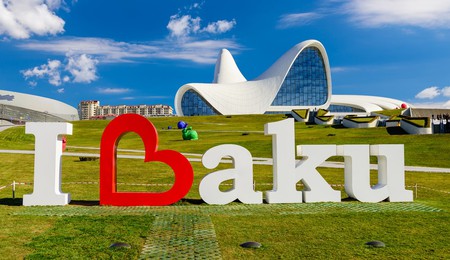 I Love Baku sign outside the Heydar Aliyev Center | © RAndrei/Shutterstock

Head to Baku, Azerbaijan’s capital, and experience layers of history, culture and lavishness combined into one attractive city. Here’s our roundup of the best things to see in Baku for the perfect photograph to capture the essence of this modern and historical capital to share on Instagram.

Baku’s most iconic attraction: The Flame Towers. Built in 2013 to resemble three flickering flames, the towers house a luxurious hotel and office space. When the sun goes down, the towers light up in the colours of the Azerbaijan flag and the orange and yellow of fire.

Stroll through the cobblestone lanes of Icheri Sheher, and spot the souvenir shops. Vendors sell carpets and trinkets to make a special memento from your trip to Azerbaijan. Just remember to barter and drive a hard bargain! Not a traditional market but worth seeing.

Maiden Tower, Baku’s most mysterious building. The cylindrical structure on the southeast corner of the Inner City is the centre of debate. No one quite knows how old it is or what it was used for. Best estimates suggest it dates back more than 1000 years and first functioned as a temple before becoming a watchtower.

Dozens of fountains fill this attractive space in downtown Baku, making it a favourite meeting point or place to hang out. Several cafés, bars and restaurants serving traditional Azeri food are nearby.

Nizami Museum, named after a 12th-century poet, is one of the best things to see in Baku and not for the museum. The lavish building features six life-size sculptures of Azerbaijan’s literary greats.

Palace of the Shirvanshahs

The Palace, inside Icheri Sheher, dates back to the 15th century, featuring as a UNESCO World Heritage Site. Inside, there’s the palace, a mosque, baths and a mausoleum.

The curved and futuristic Heydar Aliyev Center makes the list of top things to see in Baku. Located a few kilometres to Icheri Sheher’s northeast and named after the former president, the structure exudes modernity. Conference centres, galleries and a museum are inside.

Dating back to the 1960s, the series of artificial canals and islands along Baku Boulevard gives visitors the chance to experience a gondola. Hop in a boat, or walk over the romantic bridges.

Fire is a symbol of Azerbaijan. For millennia, underground gas seeped out, ignited and burned indefinitely, inspiring the early Zoroastrian religion. Ateshgah, on the outskirts of Baku, houses an eternal flame and was once an important temple.

Baku Boulevard’s version of the giant Ferris wheels common in cities around the world gives passengers a treat. For next to nothing, ride the Baku Eye during the day and night for different views. Look southwest towards the pier, and you might just be able to spot the submerged 13th-century Sabayil Castle, also known as the ‘Atlantis of the Caspian Sea’.

Seeing the architectural beauty of the Carpet Museum should be included on your list of things to see in Baku. Carpet weaving has deep roots in Azerbaijan culture and tradition. From the outside, the building resembles a rolled up carpet with patterns and motifs. Inside, learn about the techniques, significance and regional variations in Azerbaijan’s carpet culture.

Marking the western end of Baku Boulevard, National Flag Square once held the world record for having the largest flag. The minimalistic square today makes an excellent spot for a photograph against the Caspian Sea.

View of Baku and the Caspian Sea

Locals often say the best things to see in Baku are at the top of the funicular. Head up to the Eternal Flame, and savour the view of Baku’s historical layers to the north and the Caspian Sea stretching into infinity in the east.