The Murky Past of Baku's Maiden Tower 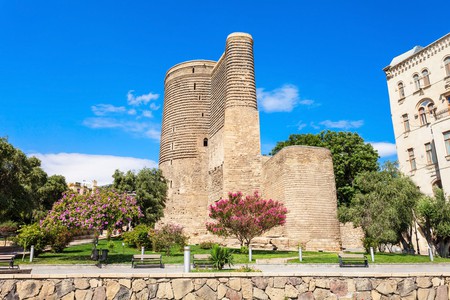 Look on the back of Azerbaijan’s 10 manat banknote and you’ll see a strange cylindrical structure. The odd-looking building, located in the southeastern corner of Baku’s Icheri Sheher (Old City), is called Maiden Tower and comes with a mysterious backstory. Here’s what we know and don’t know today.

What is Maiden Tower?

The tall cylindrical Maiden Tower in Baku stands 29.5 metres (97 feet) with a 16.5 metre-diameter (54 feet). The walls of the eight-storied structure are 5 metres (16.4 feet) thick at the base and estimates suggest 200 people can fit inside. Maiden Tower, also called Giza Galasy in Azerbaijani, has always been the centre of mystery and legends. Probably because no one really knows its age, function or historical context.

Even the name Maiden Tower exudes mystery. According to the gist of various legends, Kings imprisoned young virgin women, or maidens, inside for forced marriage. But, the name was more likely assigned at a later date to symbolise Baku’s resilience.

One thing’s for sure, the UNESCO-listed building is an icon of Azerbaijan and became the inspiration for many poems, plays and ballets.

When was Maiden Tower built?

The honest answer is nobody knows. In fact, experts can’t even agree on the millennium, let alone give an accurate estimation of its age.

Some scholars suggest the lower part of the tower dates back to the 7th and 8th centuries BC, which makes it more than 2500 years old. Others put it closer to the 4th and 6th centuries CE. However, most agree some parts originated some time around the 12th century. The difference from the earliest to most recent guess of its age is almost 2000 years!

The only thing people agree on is that Maiden Tower was probably built at two distinct periods. A sophisticated design on solid rock with wooden foundations appear to make it more durable during an earthquake. A complex plumbing system on the second floor collects and stores rainwater. Were these architectural wonders designed at the same time or in different eras? Your guess is as good as anyone’s. 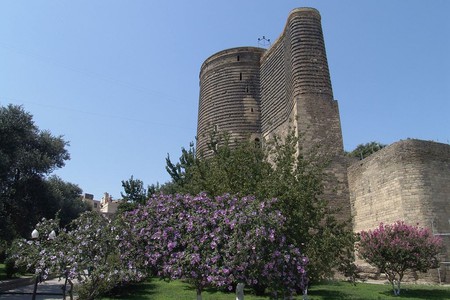 What do you think it was used for? | © Hans-Jürgen Neubert/WikiCommons

What was Maiden Tower built for?

Again, nobody knows. According to some, it’s a prime example of early pre-Islamic Zoroastrian architecture. The early Zoroastrians lived in modern day Azerbaijan and Iran, worshipping the four elements of earth, fire, air and water. Fire Temples, such as Ateshgah near Baku, are testaments to their former worshipping practices.

Others suggest Maiden Tower’s purpose lay in defence. Positioned on the corner of the former walled city and perched on a rocky outcrop near the then shores of the Caspian Sea makes it a perfect location for a watchtower. But, the design isn’t suitable for heavy defence unless the warriors stood on the top, which would be impractical.

What do we know about the mysterious Maiden Tower?

Maiden Tower was probably first a temple and later renovated into a defence tower. During the Russian Empire, it briefly became a beacon to warn approaching ships. Then in 1964, a museum opened inside telling Baku’s historical story. Maiden Tower in Baku became a UNESCO-World Heritage Site in 2000. But its real age, purpose and importance will have to remain a mystery for now. 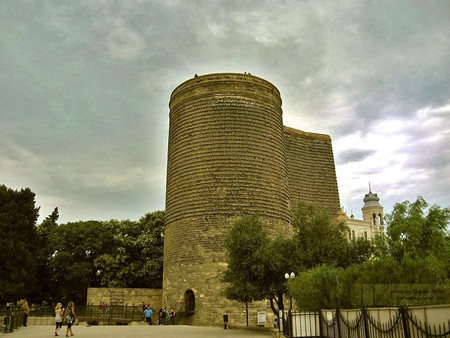