A Guide to the Azerbaijani Language 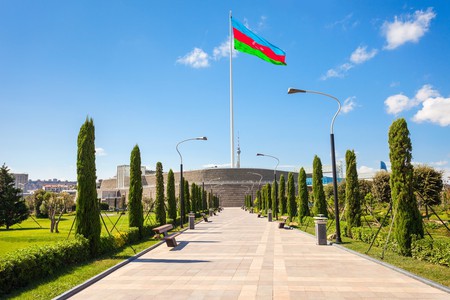 Azerbaijani, or Azeri, is part of the Oghuz branch of Turkic languages along with Turkish and Turkmen. Statistics suggest Azeri and Turkish speakers can understand each other more than 80% of the time. Azeri has influences from both Russia and Arabic too. Today, the language sounds similar to modern Turkish and uses the Latin script with a series of accents in the written form.

Here is an in-depth guide to Turkic-based languages:

A Brief History of Azerbaijan

To fully understand the Azerbaijani language, it’s important to look back at the nation’s history. Turkic speakers wandered into modern-day Azerbaijan territory in the 7th century before invading in the 11th. Azerbaijan started to communicate in a Turkic-based language. Russia and Iran competed for influence in the region, culminating in the 1828 Treaty of Turkmenchay, which partitioned Azerbaijan. The north became Russian and the south Iranian. Inevitably, this was a significant point in the evolution of Azeri.

The Russian Empire encouraged culture, arts and literature, influencing the language in the Russian part of Azerbaijan. Various Russian loan words were included too. In 1923, it became the official language of education and flourished until the later Soviet repression. This became known as Northern Azerbaijani and has more than 7 million native speakers around the globe with almost 2 million living in Baku.

Southern Azerbaijani in northern Iran evolved separately, boasting almost 19 million native speakers. Significant differences exist in the written and spoken form, but most people can understand each other.

Until 1929, both forms of Azeri used the Arabic alphabet. The Northern transitioned between a Latin and Cyrillic before the introduction of the current Latin-based alphabet in 1992. Both the Latin and Cyrillic alphabets are used in Azerbaijan today with some of the older generations preferring to use the latter. Southern Azerbaijani continued to use an Arabic alphabet, despite sharing strong phonetic similarities with their northern neighbours. 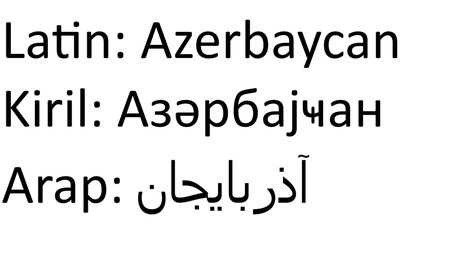 Examples of the Azeri writings in Latin, Cyrillic and Arabic | © Oyuncu Aykhan/WikiCommons

The Language in Azerbaijan Today

The 21st-century language in Azerbaijan is complicated. Northern Azerbaijani has regional dialects depending on the part of the country. Head to the Caucasus Mountains, and find even more diversity of Caucasus languages. Almost everyone speaks Russian as a lingua franca after nearly two centuries of Russian rule. The younger generations are slowly beginning to learn English, but few outside of the tourist areas in Baku can communicate well. For this reason, it’s recommended to learn a few words of Azeri and Russian before visiting the Land of Fire to make travel more convenient.