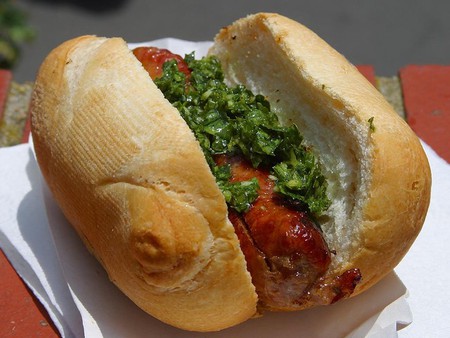 There’s more to Vienna’s culinary scene than Wiener schnitzel and apfelstrudel. The city’s prominent Turkish community has given way to a plethora of food vans opening up, selling falafel sandwiches and kebabs. Wurstel stands are also, of course, ubiquitous. Try these for a cheap and tasty eat.

It is sacrilege to discuss street food in Austria without giving sausages a look in. Wurstel stands are almost considered institutions in Vienna, satisfying thousands of commuters and tourists daily with hot, quick snacks to grab on the go. Not your average, run-of-the-mill Würstelstand; this particular stall shines out as the most reputable around and is rumoured to be the longest-running hotdog stand in the city. The only downside is being spoiled for choice with many colourful varieties of Austria’s most devoured meaty snack — some of which pack a satisfying spicy punch. Choose from käsekrainer, bosna, bratwurst, frankfurter or currywurst; there is a sausage to suit everyone. If you arrive feeling particularly ravenous, consider attempting their giant Käsekrainer — although this is not for the faint-hearted.

Lengthy queues are common outside this low-key Turkish food stand, however, it’s well worth the wait. Falafel sandwiches made using pita-style bread, wraps (durum in German) or chicken kebabs are on offer — tasty and fresh with a generous salad of crunchy lettuce, cucumber, juicy tomatoes, topped off with a choice of spicy or yogurt sauce. The service is quick and uncomplicated and the prices are low. Accompany with a cold can of beer.

This food van wants to transport you on a culinary journey across the world without leaving Vienna — through the magical medium of sandwiches. Lovingly created using fresh, seasonal ingredients, these creative constructions were inspired by the owner’s travels around the world. A favourite is the CUBANO — a decadent delight combining succulent lime and mint marinated pork, bacon, cheddar cheese, pickles and chipotle sauce. For carb-fearing visitors, salads are also available, including the Superfood Salad; with a lemon pepper dressed fillet of beef among the greenery.

This passionate and straight-talking ‘Guerilla’ food van aren’t shy of blasting bold mottos, proclaiming their ambitions to ‘save the world, wrap for wrap’ with a recurring theme of ‘no bulls***’ running throughout their philosophy. Wrapstars may come across as feisty foodies, but their objective is refreshingly clear and well-meaning; wholesome food without the frills. Rest assured, you will be in good hands if you choose to settle here for lunch. No bulls**** essentially means no product is unethically sourced — their memo is to ‘never use ingredients that your grandmother wouldn’t eat’. Understood. Loud and clear.

Maroni (or roasted chestnuts to English speakers) are the ultimate winter snack in Vienna. When the Maroni stands, with their open drum fires emitting a comforting Christmassy scent, start cropping up, it’s a surefire sign that the festive season has arrived. Bratkatoffeln (roast potato wedges) are often also on offer. You’ll find them around all the major tourist spots during the winter months.