In the Austrian artist Friedensreich Hundertwasser’s radical manifestos, nothing is what it is supposed to be: the straight line is atheistic and immoral and an uneven floor is a melody to the feet. This nature-loving, self-proclaimed ‘architecture doctor’ created refreshing masterpieces of unruly shapes and vibrant colour, expressions of a powerful idealism that compelled people to think out of the box. 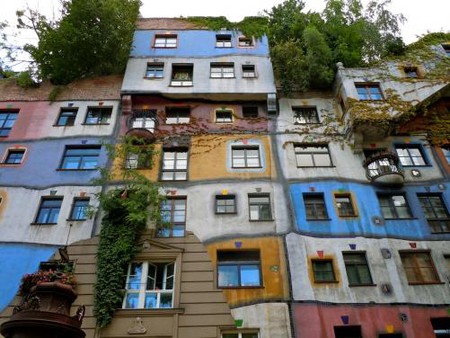 Born Friedrich Stowasser in 1928, the Viennese artist most commonly known as Friedensreich Hundertwasser (or ‘Kingdom-of-Peace Hundred-Water’) started his artistic revolution by adopting a new name. Inspired by the multidisciplinary Viennese Successionists and the Austrian artists Egon Schiele and Gustav Klimt, as well as the improbable constructions of Antoni Gaudí, he set out on a creative adventure through painting, sculpture and architecture, determined to combine the expected and the unexpected, the disciplined and the unruly and the rational with the seemingly mad.

Hundertwasser was not just an enemy of the straight line (‘Paradise Destroyed By The Straight Line’ manifesto, 1985). He despised architectural rationalism (‘Mouldiness Manifesto against Rationalism in Architecture’, 1958), where he claimed everyone’s Window Right – a tenant’s ability to paint out of their window within an arm’s reach. According to the artist, only then would each person differentiate themselves from the ‘imprisoned, enslaved, standardised man who lives next door’. 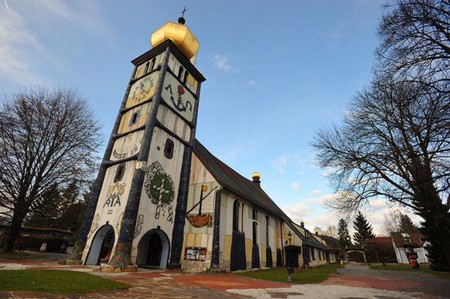 Under this highly individual, unconventional regime, which he combined with a profound respect for nature and, naturally, a love of irregular shapes and wavy lines, he created trademark buildings like the Hundertwasserhaus, with a total of 250 trees and bushes growing in and out of its apartments and terraces; the KunstHausWien museum, with its undulating floors, rich foliage and checkerboard mosaics; the Quixote Winery in California’s Napa Valley, with its idiosyncratic shapes and eclectic tiles; the ever whimsical Hundertwasser toilet in Karakawa, his last project in New Zealand, where he chose to spend the last two decades of his life. 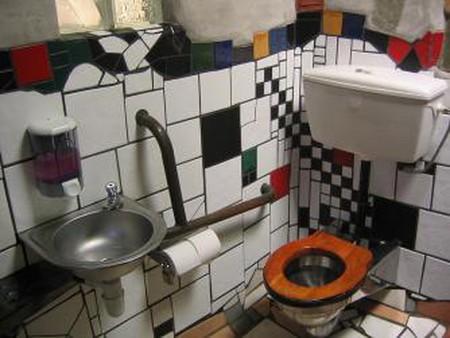 Hundertwasser, according to his beliefs, was a man of three skins: His epidermis, his clothes and his house. Later in his career, preoccupied by new concerns, he added more: the social environment and the planetary skin. From his body to the biosphere, he was looking for an inner truth and a quality of life both on the inside and the outside, in the earth that feeds us. He was one mind with a thousand liberating facets that creatively spiralled into a fertile universe of exotic colours, quirky tiles and blossoming childlike forms.