Franz West and the Touch of Art

Viennese artist Franz West passed away in July 2012, leaving an indelible mark on the Austrian art scene. The artist is world-renowned for his ‘touchable’ sculptures and installations. Michèle Kieffer describes how the artist’s sense of humour and his passion for monumental biomorphic forms transformed the relationship between his art and viewers. 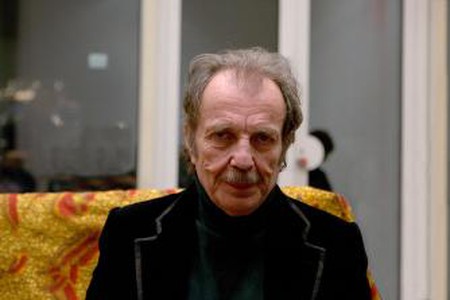 Franz West began working actively as an artist in 1970, at a time when the Viennese Actionism movement was shocking Austrian society. He distanced himself from the Actionists’ performances – defined by violence, nudity or sexuality – but not from the desire to provoke. West wanted to break taboos, but those taboos lay within the art world itself, a world dictated by society and tradition. Although the artist’s early works consist of collages and paintings, West is best known for his ‘touchable’ sculptures and installations – the highlights of his career spanning 40 years.

Through his sculptures, West analyses the nature of art, its display and the viewer’s relationship to it. The artist does not reinvent; he simply identifies and plays with existing features of the art world. By overcoming the rule of not touching the art, he changes the dynamic of museums and galleries. As a result, traditional boundaries become obsolete. The onlooker is not supposed to be a silent observer anymore, they become an active component. The audience actively engages with the art, and its reaction becomes the centrepiece of West’s sculptures. 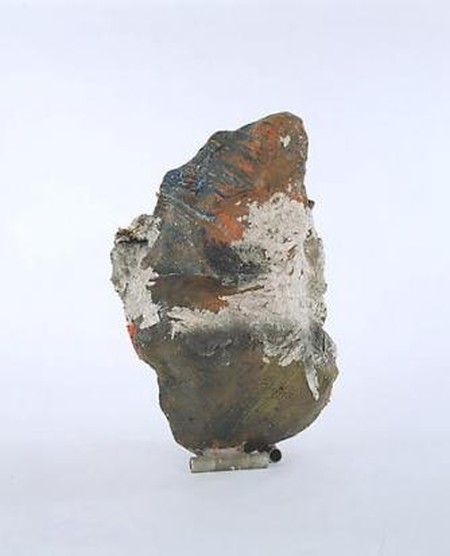 In the early seventies Franz West created his first Passstücke or ‘Adaptives’. These portable sculptures of papier-mâché, cardboard, wire, gauze and white paint that can adopt all kinds of forms. They are meant to be carried by the viewer, whose involvement does not only complete the pieces, but transforms them into art, according to West. By placing mirrors and sometimes private mirrored booths in his exhibitions, the artist gives viewers the chance to see themselves interact with the sculptures. Through the years, the dimensions of Franz West’s sculptures have gradually increased. From portable pieces to monumental outdoor installations such as The Ego and the Id (2008), West has remained faithful to bulging biomorphic forms in bright colours that invite viewers to climb or sit on them. With a vivid sense of humour and a weakness for irony, Franz West pairs his clumsy prosthetic-like sculptures with philosophical or political sideswipes, through the titles or their geographical location. A perfect example would be Les Pommes d’Adam from 2007, a temporary installation of four pink phallic sculptures on the place Vendôme in Paris next to Napoleon Bonaparte’s Vendôme Column, built to commemorate his victory in the battle of Austerlitz. 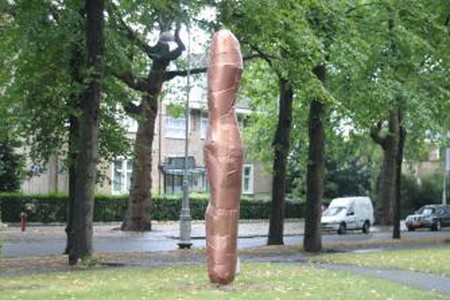 It was not until the 1980s that West created and incorporated furniture, such as sofas, chairs and beds into his exhibitions. These sitting arrangements made it more and more clear that sitting or lying down is a crucial part of West’s works. The sculptures do not only facilitate social interaction, but they also incite the viewer to experience their tangibility by prolonging physical contact with them. West declared in 2007: ‘It doesn’t matter what the art looks like, but how it’s used.’ (Interview with Roxana Marcoci for the MoMA’s exhibition Comic Abstraction). Thanks to their usefulness, the sculptures and furniture become part of the viewer’s life, combining art and design. 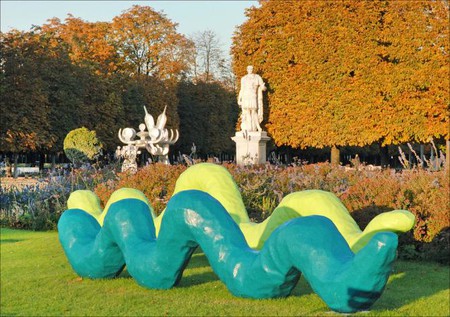 When Franz West died in July 2012 in Vienna, the city where he lived and worked, he was recognized as one of Austria’s most influential sculptors on the international art scene. Represented among others by the renowned Gagosian Gallery, Franz West has had two major retrospectives at the Museum Ludwig in Cologne in 2010 and the Baltimore Museum of Art in 2011. Furthermore, he was awarded the Golden Lion at the Biennale di Venezia in 2011 for Lifetime Achievement.