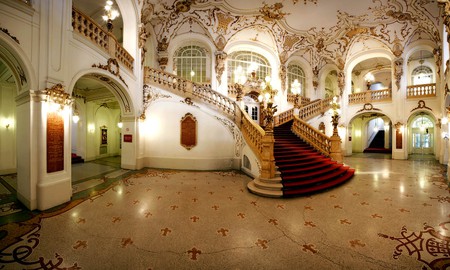 The staircase in the foyer of Graz's Opera House | WikiCommons

Austria is one of the best places in the world to see classical music performed live. Audiences flock to its beautiful theatres and concert halls to watch the melodramatic beauty of opera. Here are some of the finest places to enjoy a performance, all suitably decadent, with extravagant exteriors and fancy furnishings.

This historic building, constructed at the turn of the 19th century in the Mariahilf district, has been lucky enough to witness the premieres of many of Beethoven and Johann Strauss’ greatest works. The impressive interior (below) boasts rose walls embellished with lashings of golden swirls – an extravagant style typical of the Viennese. Shortly before World War II, the theatre closed its doors, reopening again in 1945 with a performance of Beethoven’s only opera Fidelio. 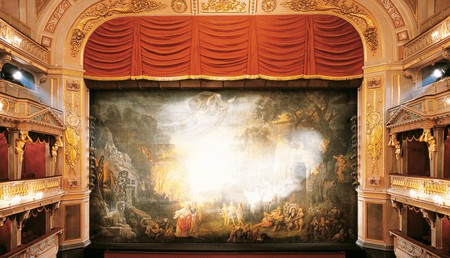 Purpose built for the Salzburg Festival and one of the largest opera houses in the world, the Large Festival Hall is a stunning piece of architecture. If watching a show, you may have trouble following the plot as your eyes wander off to admire the fine art adorning the walls of the interior. This is one of the country’s most aesthetically enticing opera houses, with detailed mosaics on the floor accompanying sculptures and paintings by renowned Austrian artists.

The debut performance here was Mozart’s Bastien und Bastienne, setting the bar high for the thousands of acts that have followed. The Salzburg Marionettes, the theatre’s company, have toured the world, bringing their puppet shows to a much wider audience than they can reach at home. During a reconstruction of the building in the 1970s, the stuccoed ceiling in the foyer was concealed. It remained hidden until a reconstruction in 2000 restored it to its former glory. 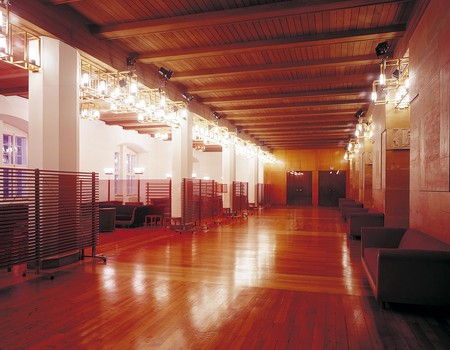 Performances of opera in Graz were taking place as early as the 17th century. Erected in 1899, the neo-baroque style Graz Opera has staged thousands of productions, hosting celebrity singers such as Maria Kouba and Ljuba Welitsch. Although the building suffered extensive damage during World War II, it subsequently underwent a US$15 million restoration project that modernised the interior. The repertoire at Graz Opera is always of the highest calibre and has included many of Mozart’s famous renditions. German magazine Opernwelt named it ‘Opera House of the Year’ in 2001. 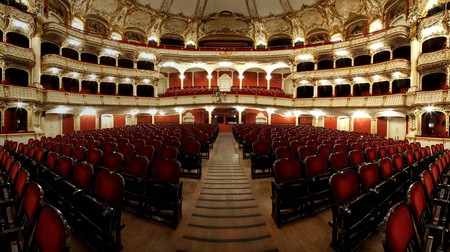 The lavish interior of the Oper Graz auditorium.

Intended as the ‘Emperor’s Anniversary Theatre’, this venue presents a delightful assortment of acts, including many modern musicals. Opera and operetta (opera’s jovial cousin) were not staged here until 1903, as it was not originally intended for the purpose of staging lyrical theatre. For visitors who haven’t yet mastered the German language, English subtitles are provided during select performances.

The opera house to end all opera houses, this mammoth wedding-cake-style building in the centre of Vienna attracts thousands of visitors through its doors each year. The 19th-century decor is incredibly lavish inside-out and the bill is always packed full of the finest operatic acts, offering an exciting new schedule each season. If you happen to be strolling past, you may find yourself persuaded to purchase a ticket by one of the many Mozart impersonators in the questionable old-style wigs.