10 Artworks By Egon Schiele You Should Know 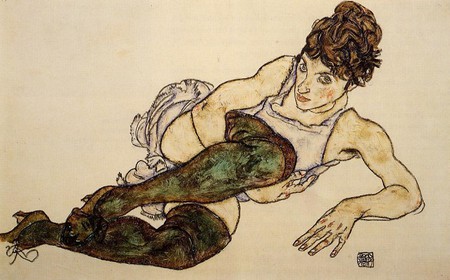 Egon Schiele (1890-1918) lived and worked in Vienna, the intellectual and artistic capital of Europe at the turn of the century. He was a student of Gustav Klimt, and a pioneer Expressionist who developed his own style. He lived a bohemian life of imprisonment, discarded women, love affairs, and an early death. For many years, his works were dismissed as pornographic; even his self-portraits featured the artist in full frontal nude. But he followed his own artistic vision, and there’s much more to Schiele than meets the eye. We profile the artist’s life through ten of his best works.

You couldn’t depart further from the traditional, smooth Renaissance nude than Schiele’s early depiction of himself. He painted himself nude many times, including images of himself masturbating. They still have the power to shock and unsettle a century later. In 1910, he was still only 20 years old but had been exhibiting work for two years. In Seated Male Nude, the artist is stripped bare, his flesh a strange, unhealthy pallor against a white background. It’s as if he exists in a void, unable to connect with anything outside himself. And yet even as he turns his face from the viewer and his hands and feet are cut off, the crimson of his nipples and genitals suggest deep creative fire within. You’ll find the painting in the Leopold Museum in Vienna. 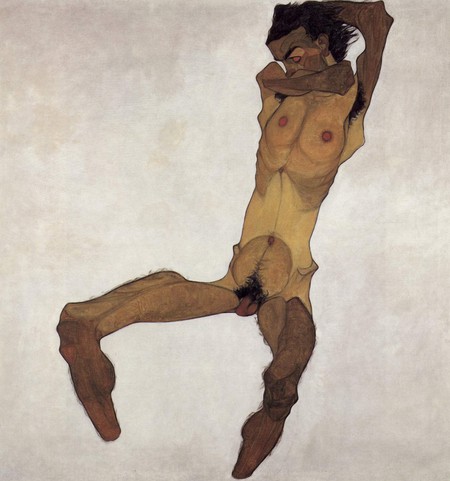 The artist’s self-portrait is a tradition that runs back to the Renaissance and van Eyck, Durer, and the great master of the form, Rembrandt. Schiele was still only 22 when he painted his Self-Portrait with Physalis, but his style is remarkably mature in this enigmatic work. That penetrating gaze towards the viewer, the eyebrows arched, lips pursed, head cocked to one side, suggests haughtiness, arrogance even, a young man conscious of his immense creative talents. He’s perhaps a little standoffish to the rest of us, cut off from him in mundane, ordinary society with its dreary rules and mores. And to one side is the bright lampion fruit, its sinuous tendrils making for a stark contrast to the masses of black that forms Schiele’s hair and jacket. It’s another work in the Leopold Museum. 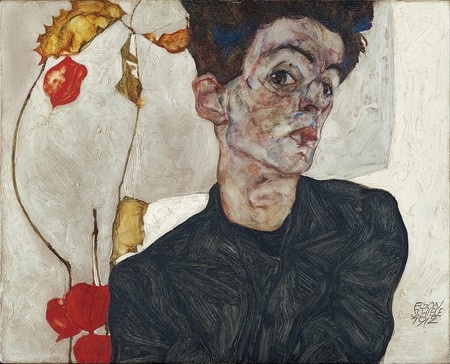 Two women loom large in Schiele’s brief life. He met the first, Wally Neuzil, in 1911 when she was 17. It’s possible that she had been a model for Klimt, and for Schiele, she became a muse, model and lover. Together, they left Vienna for Krumau in Bohemia, only to be forced out for their unconventional lifestyle, before heading to Neulengbach where Schiele was arrested for seducing a 12-year-old girl and imprisoned for creating pornography. His Portrait of Wally is a companion to his own Self-Portrait, but instead of his bold confidence, viewers will see sadness, tenderness in her big azure eyes and the coy tilt of her head. It’s now in the Leopold Collection but was seized by the Nazis and has been the subject of a long-running legal case. 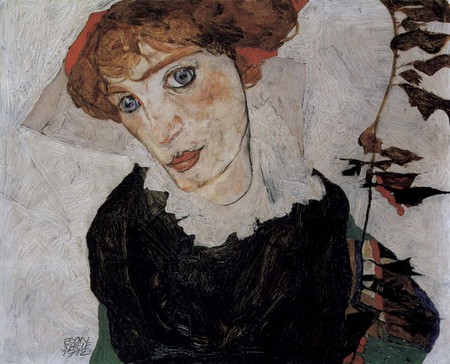 One of Schiele’s strangest works, The Blind Mother is reflective of his own troubled relations with his mother. Motherhood was a theme he returned to over and over again in Dead Mother, Young Mother, and Blind Mother II. How viewers should read The Blind Mother is difficult to gauge. She is unhealthily thin and pale, the red of her lips stands out and chimes with the streams of red on the floor. And she seems to be in a kind of cupboard or garret with an empty chest behind her. Does the empty chest suggest her womb, her holding of the children a wish to return it to the protection of its prenatal state? Or is there an accusation within this painting, a suggestion that the mother also kills the children, hence those rivulets of blood? Does she suckle the children or smother them? 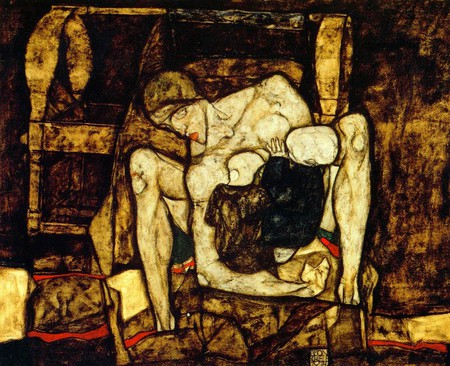 Perhaps Schiele’s greatest work, Death and the Maiden hangs today in the Osterreichische Galerie Belvedere in Vienna. It had a sad genesis. In 1915, Schiele met Edith and Adele Harms, who lived across the street from his Vienna studio. He decided to marry Edith and keep Wally as his mistress. Wally refused and left him. She started again, became a nurse, and died on Christmas Day, 1917. In the painting, we have to wander who is Death and who the Maiden. Is Schiele, ridden with guilt for ditching Wally, himself Death and Wally the Maiden? Or is he the Maiden, facing the threat of conscription into the Army? That manic stare in the eyes of Death is truly unnerving, along with his bony fingers. And the landscape in which they sit is like a set of tumescent growths bubbling out of the earth. 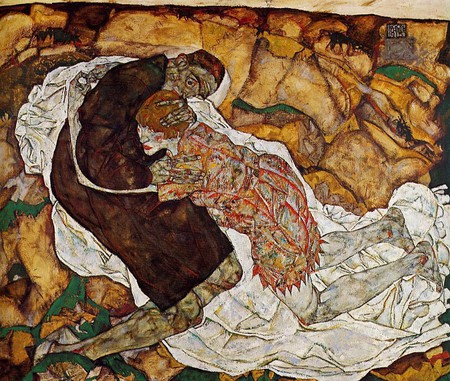 Schiele married Edith in 1915. Three days later, he was called up into the Austrian Army. He continued to paint during his active service, guarding Russian prisoners and performing staff duties before he returned to Vienna in 1917. His style shifted in these years too. Marriage seemed to calm Schiele’s brushstrokes. Compare Embrace of 1917 with the early nudes and their frantic energy has clearly abated. In the canvas, Schiele is with Edith in a naked embrace seen from above. There’s something approaching tenderness here; love has clearly had a pacifying effect on the artist. His back may still look craggy, but look at the closed eyes of his wife, her arms enfolded around him. He manages to convey intimacy rather than the untrammeled rampant sexual energy of his early works. 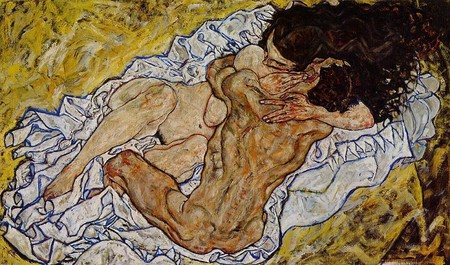 The female nude or semi-nude was another recurring subject for Schiele. His 1917 Reclining Woman in Green Stockings is restrained in subject matter compared to some early pieces and, again, shows his stylistic shift to crisper, more precise rendering of the human form. His subjects seem less tortured, healthier even. Color is made to convey depth on the girl’s flesh and clothing rather than busy, spidery lines. And from that tangle of limbs, the viewer is drawn to the velvety texture and dark green of her legs, while she seems to be almost emerging from a flower due to the stylistic rendering of her dress at the back. His model was Adele Harms, the sister of his wife – more lissom and graceful than Edith – and rumored to be another of his lovers.

Schiele’s reputation over the years has largely centered on him as a painter of nude flesh, a slightly obscene and impish presence within Western Art. But he also did plenty of landscapes and townscapes in his short life. He grew up, after all, not in Vienna but the provinces. Four Trees shows four chestnut trees in autumn; one of them is bereft of leaves and is little more than bare, bony branches. The trees are four vertical shafts in a canvas filled with horizontals – in the sky and the undulating lines of the hills. It’s a work that looks backward to the landscape tradition of the German Romantics and alludes to works by van Gogh in its rich colors and to Ferdinand Hodler’s 1982 work Autumn Evening. 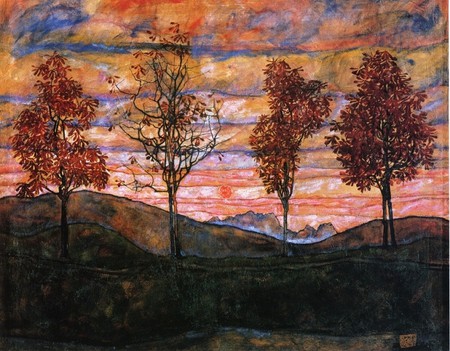 Krumau was the birthplace of Schiele’s mother and the place from which he was hounded by locals after heading there with Wally in 1911. Ironically, it’s where you’ll now find a museum dedicated to his life and works. Schiele painted Edge of Town in 1918, and like Four Trees, it’s a painting that hints at its influences and forebears. The busy, jagged lines of the houses are reminiscent of how Cézanne, and later Braque, rendered buildings at L’Estaque. And the multi-colored houses, like stained-glass panels, are almost an echo of the Cloissonnism of Gauguin. The painting is now in the Neue Galerie Graz. 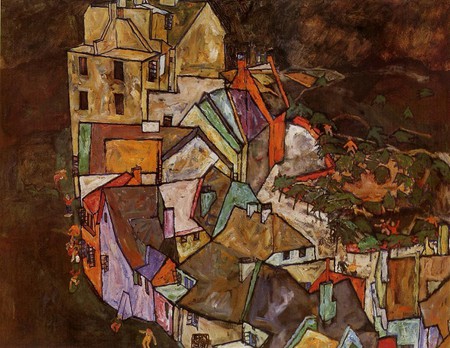 Schiele’s last great canvas: he called it Squatting Couple, with the name The Family only being given later. It’s a mysterious image of a naked man, a naked woman in front of him, and a child between her legs. Any autobiographical intent can be discounted – Edith looks nothing like the woman, and they never had children. They can be seen as a unity, three figures all connected. But in their distant gazes, they seem strangely disconnected too. The woman’s legs are truncated in a way similar to Schiele’s nude self-portrait of 1910. And behind them is a dark, forbidding abyss. The sad coda to the painting is that Edith died in October 1918 during the Spanish flu pandemic. Three days later, Schiele died too. 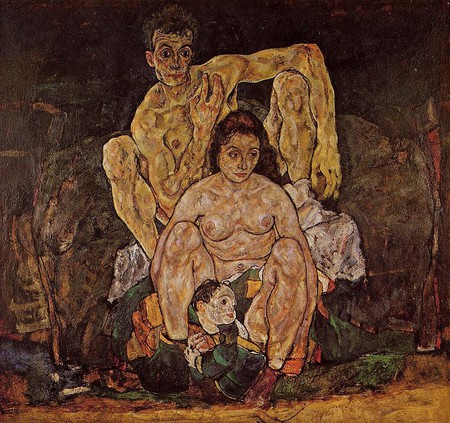