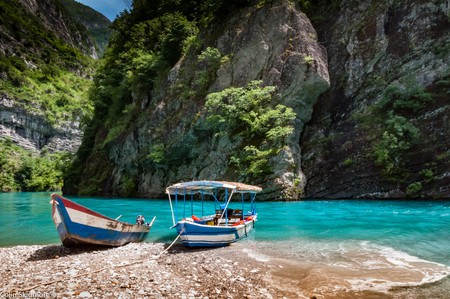 One of the world’s greatest boat trips is along Albania‘s Lake Koman surrounded by the ever-changing scape of dramatic mountain gorges that reflect in the calm water’s surface. Be sure to experience it soon.

Every morning along the Koman Reservoir the ferry station fills up with buses carrying local and foreign travelers who need to traverse the water. A few different boats of various sizes await at the small station, some big enough to carry a few vehicles. Lake Koman is a reservoir on the Drin River produced through the construction of a dam between 1979 and 1988. After the inundation of the area, a ferry service was established for the local population but soon became a popular tourist destination due to the beautiful surrounding forested hills, deep gorges, steep slopes, and narrow valleys. 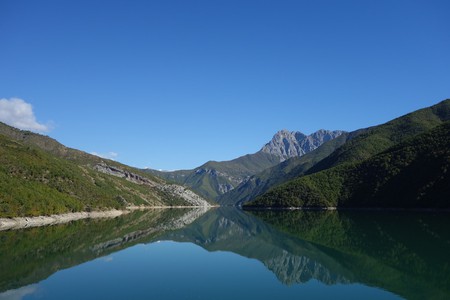 One of the best ways of taking one of the Lake Koman ferries is to spend a night in Shkoder and catching the 6am bus that takes off from the main square (Sheshi Demokracia-Democracy Square) near the Hotel Rozafa. If you’re staying at a hostel or hotel in Shkoder, you can also ask the reception to call the bus driver, which means the bus will stop to pick you up directly at your accommodation. This bus ride is also quite the experience in its own right, because apart from the tourists in the city, it also makes a few stops in the many villages on the way to bring all the children to school. It’s quite the beautiful glimpse into local Albanian village life, which seems to have remained quite idyllic. 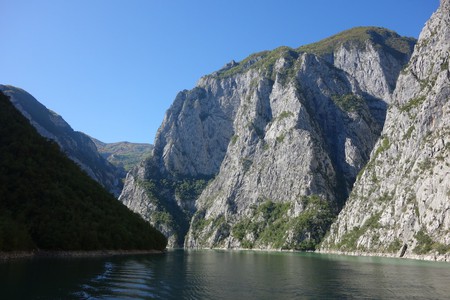 After an exciting ride through a long tunnel, the bus arrives at the ferry station and the driver will give you a ticket that is valid for the bus ride, the ferry ride, and another bus ride to Valbona (if that’s where you’re headed). Make sure to take a quick bathroom stop at one of the cafes because the ferry ride takes more than two hours and there are no bathrooms on most of the ferries. Taking along something to eat is also an excellent idea, since there is also no food for sale on most ferries. Taking a camera to capture all the magnificent views is also essential. 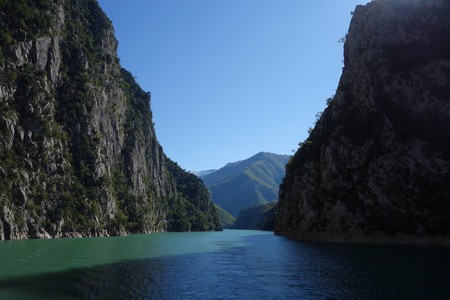 As the ferry slowly drifts along the lake, huge mountain gorges appear before you that are reflected in the water. You’ll often see single houses built into quite high mountain elevations, which will make you wonder who lives there and how they were possibly able to build a home in such a remote location. The small boats that are tethered to the shore seem to be the only form of transportation for many of the small villages that you’ll see along the way; an entirely different world where simplicity still reigns. By the time the ferry reaches Fierza, you’ll reluctantly get back on shore, taking a last long look at the lake before you show your ticket to the driver who will drive you to Valbona.