A Tour of Tirana's Communist Landmarks 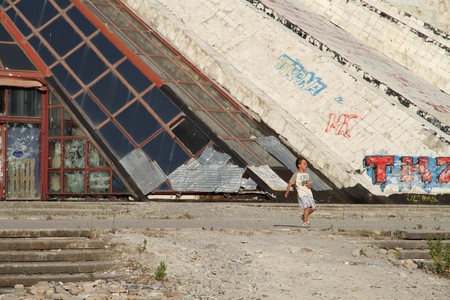 The Pyramid of Tirana | © Andreas Lehner/Flickr

Tirana is one of the most interesting cities in the Balkan Peninsula thanks to its fascinating history. The town was nominated capital of Albania only in 1920, and, before that year, it was nothing more than a large hamlet. From 1944 to 1990, Tirana (and the rest of Albania) suffered a period of isolation during the Communist regime. Still today, traces of this historical period can be found in different areas of Tirana. To discover more, read our tips to find the best of Tirana’s communist landmarks.

There is no better place to start your Tirana’s communist tour than walk around Blloku. Today, Blloku is the liveliest district of the capital of Albania, but once it was an area restricted to ordinary people, only the communist elite was able to cross it. The main communist landmark in Blloku is the former house of the dictator Enver Hoxha. This simple villa is situated right in the middle of the area and, unfortunately, is closed to the public, but visable from the street.

The House of Leaves

The House of Leaves is the newest museum opened in Tirana and one of the most interesting. It is located in the former headquarters of the Sigurimi, the secret Albanian police during the communist regime. The house was once a medical clinic, then was used by Gestapo (under German occupation), and finally the Albanian government utilized it as the office for investigations. Today it’s a must-see museum for history fans. It is not hard to find because it’s located right in the heart of the city, in front of the orthodox cathedral of Tirana.

A not-to-miss place to learn more about the communist history of Tirana and Albania, is the National Museum of History, the largest museum in the country, It has a special pavilion entirely dedicated to the communist crimes during the regime. The pavilion displays photos, documents and objects belonging to the period, from 1944 to 1990, and is very interesting. A special section is dedicated to the religious victims during those years: In 1967 Albania was declared the first atheist country in the world, and in the following years many religious sites, mosque, churches and monasteries were demolished.

The Palace of Culture of Tirana

The Palace of Culture of Tirana was one of the main buildings built during the communist era. Nikita Khrushchev laid the first stone of this majestic palace during a visit in Albania in 1959, and the building was finished four years later, in 1963. Today the Palace includes the National Library of Albania as well as the national Theater of Opera and Ballet, two of the most important buildings of the country. The architecture is typical of those years and reminds to many communist-era buildings spread throughout Eastern Europe.

Postbllok, or Checkpoint, is a memorial to communist isolations created by the former dissident Fatos Lubonja and artist Ardian Isufi, which commemorates the country’s political prisoners of Hoxha’s regime located in front of the Government building, in Bulevardi Mother Theresa. The installation, surrounded by green and trees, includes a bunker, remaining supports of a mining gallery from the labour camp of Spaç and an original piece from the Berlin Wall. We suggest you descend the stairs down the bunker and watch people passing near it.

Tirana is home to two great museums dedicated to the communist history of the country: BunkArt and BunkArt2. The first one is located in the outskirts of Tirana and is situated inside a majestic coveted bunker, the second is in the middle of Tirana, a few steps from Skanderbeg Square. If you have time, we suggest you visit both because they’re interesting and provide important notions to one of the darkest eras of Albania.

A huge underground bunker used by the authoritarian government of Albania from the end of WWII till the early 90’s. Now a museum about the oppressive, paranoid, and isolationist regime that built it.

You cannot say you have visited Tirana’s communist landmarks without seeing the Pyramid. The daughter and son-in-law of Enver Hoxha built this majestic building as a mausoleum for the dictator after his death. Used as refuge during the Kosovo war in the ’90s and home to one of the most famous clubs of Albania, Mumja, until a few years ago, the Pyramid is a tourist attraction and a place frequented by young skaters and artists who come here to relax. Climb to the top to admire Tirana from a different perspective.