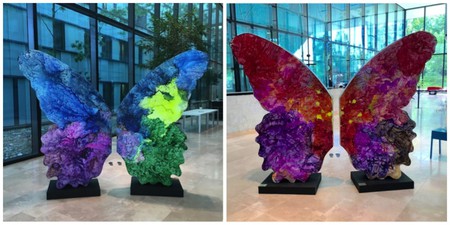 She has received international acclaim for her butterfly paintings and sculptures, but Panamanian artist Marisabel Bazán views art as a medium for conveying deeper messages of joy, connectedness, and metamorphosis. Bringing her butterflies to life through the use of vivid color and texture elements, each piece takes the viewer on a journey, communicating viscerally to the innate essence of the human spirit that lies within all of us. 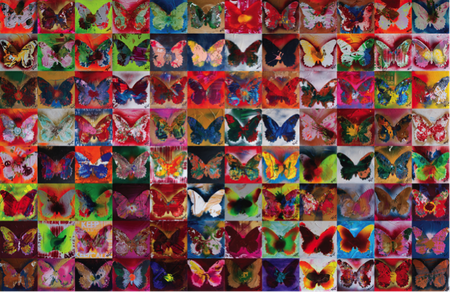 from the 'Dream Big Collection' | Courtesy of the artist

Bazán was born in Panama City, and remarkably, she is self-taught. This visual artist originally pursued a career in the music industry as an MTV VJ during the early 2000s. From here, she earned a record deal, causing her to relocate to Los Angeles in 2003. Rather serendipitously, Bazán fell in love with the street murals and contemporary artwork she encountered in the city, and began making vision boards as an outlet for creative expression.

Over the next five years this passion grew, and she was ultimately selected for an artist’s residence at LeSportsac in 2011. Bazán’s art appeared on the brand’s backpacks, tote bags, and other merchandise. Her work for this brand received immense exposure, and Oprah Winfrey even featured her LeSporstac butterfly bags on Life Lift: The Oprah Blog.

Bazán had her first solo show, Lalaland, in 2012. In just one year she sold over 250 original pieces, and has since sold out many art shows around the globe, a testament to the fact that her message resonates with so many.

Commissioned work | Courtesy of the artist

In 2014, Bazán’s The Dream Big Collection was even featured in Times Square as part of the See Me Takeover project for which Bazán created a collection of 125 different butterflies. Her vivid red and glowing gold butterflies spread their wings across one of the square’s most massive billboards, creating a dazzling effect against Manhattan’s nighttime skyline. 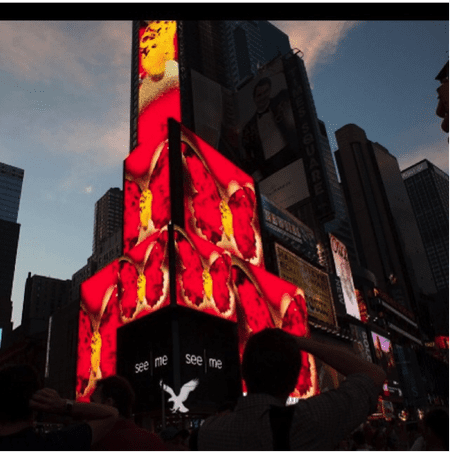 Marisabel's work in Times Square | Courtest of the artist

Dance of the Butterflies Mural in West Hollywood

Urban murals have long been used as a means of bringing inspiration to everyday spaces, incorporating the transformative powers of art into daily life. In 2015, the Arts and Cultural Affairs Commission of West Hollywood commissioned Bazán to paint an expansive 1,400-foot wide mural, Dance of the Butterflies in downtown LA.

Bazán’s paintings utilize mixed media techniques to create a style which can be described as “urban avant-garde.” This look is fitting to her message that the ache of loss and change, which ultimately results in growth and transformation, is a phenomenon that can be found in every walk of life. With the butterfly as a symbolic manifestation of this concept in nature, Bazán used the motif in her mural as a reminder that it exists in urban spaces as well.

Her hope is that the butterfly image, “against the backdrop of a handwritten mural…becomes a message that with faith and an enduring spirit, anyone can transform their lives into something profoundly incredible.”

Bazán’s art has received acclaim in her home country as well. Her piece, Ill Cammino Della Farfalla, adorns the stairs of the famous La Cresta in Panama City. Here, thousands of butterflies cascade down the steps in a broad spectrum of sizes and shades. In 2015, she collaborated with Panamanian designer Katerina Evans on her bathing suit line, which appeared in the country’s Fashion Week. Most recently, Bazán received recognition from the First Lady of Panama, Lorena Castillo de Varela, for Ananda. 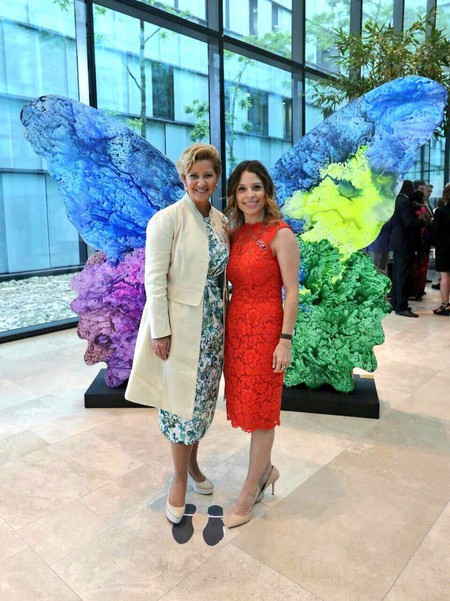 “The butterfly represents a human being and the power we all have to transform ourselves and our world.” Perhaps the biggest artistic success yet in Bazán’s 12-year career, ‘Ananda’ is the name of her most recent sculpture, a three dimensional variation on her signature butterfly. In May 2016, she gifted it to the UNAIDS’ permanent art collection as part of its zero discrimination campaign, which is dedicated to eliminating identity prejudices faced by people around the world. She presented ‘Ananda’ in Geneva alongside the First Lady of Panama and UNAIDS Director Michel Sidibé who praised it as “an important part of her legacy.” 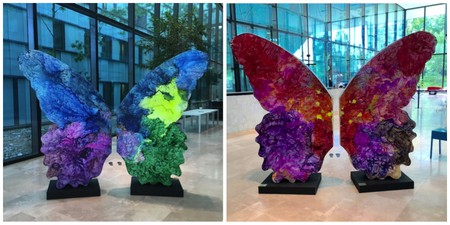 'Ananda' | Courtesy of the artist

Though she is traversing different artistic mediums, her message remains the same: “When I was approached for this Zero Discrimination UNAIDS project, I had a vision of life-sized butterfly wings –where anyone can be transformed into a beautiful butterfly. My journey through the world of art has always been led by the desire to change my life in a positive way. I use it as a message of faith and enduring spirit, with the intention that people always find inspiration and aspiration with my work. These wings represent the power in transformation, the freedom to live an honest, respectful and magnificent life.”

Since the butterflies symbolize that “the inherent beauty of the human condition overrides life’s harsh realities,” her work can have a powerful impact in fostering a sense of connectivity among those that view it. In using art as a medium, Bazán herself brilliantly combats divisiveness and discrimination through provoking these universal sentiments. 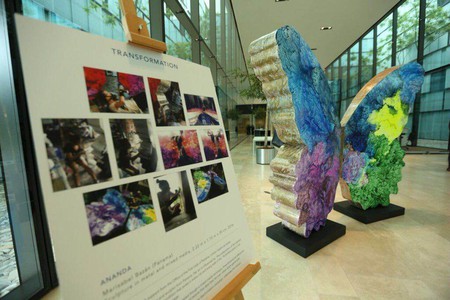 'Ananda' | Courtesy of the artist

Indeed, UNAIDS deemed the life-size butterfly, “a sculpture celebrating joy and the power of transformation.” Ananda captures the essence of life and the dynamism of the human spirit as people stand in front of her and subsequently gain a beautiful set of butterfly wings.

Butterflies can represent many different things: transformation, the giddiness of a first love, freedom, and the human spirit. Bazán has traveled far and wide to share her talents and spread her inspiring messages through her work to people at each corner of the globe. We can’t wait to see where the inspirational powers of Marisabel’s butterflies land next.

Today, Bazán continues to work with brands and charity organizations in addition to achieving renown in the contemporary art world. She currently splits her time between Panama and LA. To find out more about her work, head to her website, or follow her on Instagram (@marisabelbazan), Facebook (mwashere), and Twitter (@marisabelbazan). 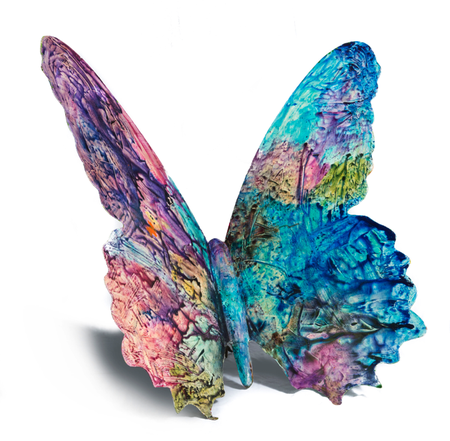 Commissioned work | Courtesy of the artist
Give us feedback