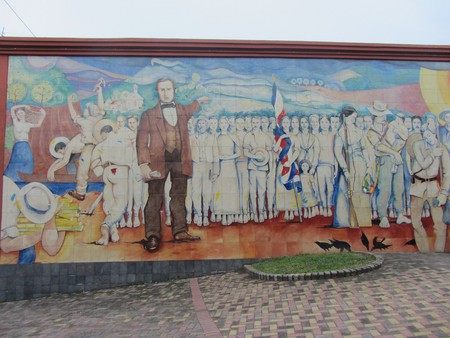 Juan Santamaría is Costa Rica’s most famous national hero, and his story is quite extraordinary. He played an integral role in the country’s victory over General Wallace Walker and his mercenary army from Nicaragua. While there is little known about Santamaría’s past leading up to his death, he will forever be immortalized in Costa Rica’s history and legacy. He lived a very short life, which began in Alajuela on August 29, 1831, and ended at the Second Battle of Rivas on April 11, 1856.

In the 1850s, Nicaragua became a country of very high interest and value to the American import/export business market. In 1854, Nicaragua was in the midst of a civil war, and Wallace Walker (an American) decided to take advantage of this and traveled down with 300 mercenaries to aid the Nicaraguan Democratic Party in the fight against the Legitimist Party. Walker played a significant role in the defeat of the Legitimist Party, and following the civil war, he took over Nicaragua. His ultimate idea was to take over and enslave countries throughout Central America on a quest to build his own empire.

Meanwhile, Costa Rica’s president at the time, Juan Rafael Mora, had been paying attention to what Walker was doing in Nicaragua and began to fear for Costa Rica’s safety and independence. For this reason, he declared war on Walker and his army. Costa Rica’s army was primarily made up of peasants, which included Juan Santamaría. 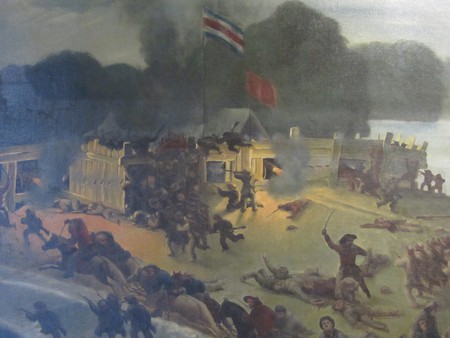 While Costa Rica was gaining momentum and ground against Walker’s army at the Second Battle of Rivas, there was a stalemate. Walker took over the Mesón de Guerra, which was a building that gave his army a very advantageous position both for safety against and firing on the Costa Rican army. As long as they held this position, Costa Rica would remain at a loss and would be unable to defeat them.

General Mora asked his men if there was someone who would be willing to bravely volunteer and set the Mesón de Guerra on fire. This task was likely to be a death sentence for whoever volunteered, but one that would save everyone else. A young drummer boy named Juan Santamaría stepped up to the challenge. His sole condition was that if he died, someone would take care of his mother.

Juan Santamaría set the Mesón de Guerra on fire, which was a major contributor of how the Costa Rican army won the Second Battle of Rivas, ultimately winning the war. Santamaría, sadly, did not survive the injuries he obtained during his sacrificial mission. This brave young man saved Costa Rica from Wallace Walker and his army of mercenaries. 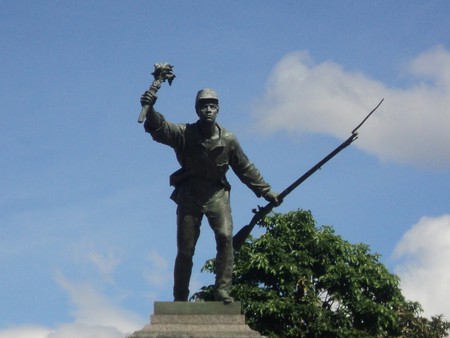 Día de Juan Santamaría is celebrated across Costa Rica on April 11th and is one of the country’s major holidays. Most businesses and government offices close for this special day, and parades take place all over the country. Typically, the president gives a speech to commemorate and celebrate this important day in history. Costa Ricans take great pride in this victory and Juan Santamaría’s sacrifice and legacy. There are several statues of Santamaría in Costa Rica, and the international airport in San Jose was renamed in his honor.