Hummingbird Species You Can Find Only in and Around Costa Rica 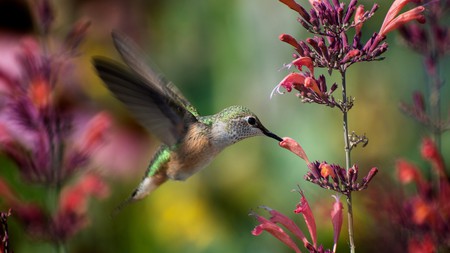 The mangrove hummingbird is found only on the Pacific coast of Costa Rica, in mangrove forests. It feeds almost exclusively on mangrove flowers. In 2008, the International Union for Conservation of Nature declared the mangrove hummingbird an endangered species. The main threat to this species is climate change. The rise in annual temperatures is causing sea levels to rise, which threatens this hummingbird’s habitat. In 2013, the American Bird Conservatory and Osa Conservation established the Yellow-Billed Cotinga Sanctuary, aimed at protecting mangrove forests and the species that reside there.

The coppery-headed emerald hummingbird is found only on the Caribbean highlands and Pacific highlands of Costa Rica. These hummingbirds prefer to live in cooler and wetter climates. Outside of the mating season, the females live at the canopy level while the males reside at the understory level. When it comes to feeding, however, they travel wherever the flowers are ripe. 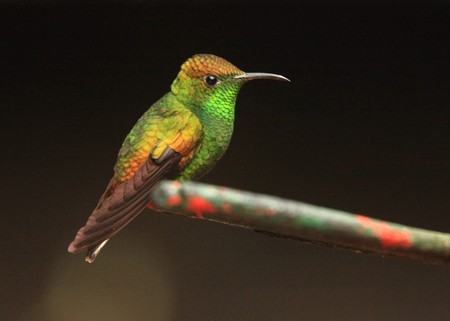 Only in Costa Rica! | © Tim Lenz/Flickr

Endemic to the Highlands of Costa Rica and Western Panama

The fiery-throated hummingbird is an exquisitely colored hummingbird. The iridescent rainbow coloring is caused by refracted light, and this is the case with all hummingbirds. This medium-sized hummingbird weighs on average only 0.2 ounces (5.7 grams) and is the only member of the genus Panterpe. 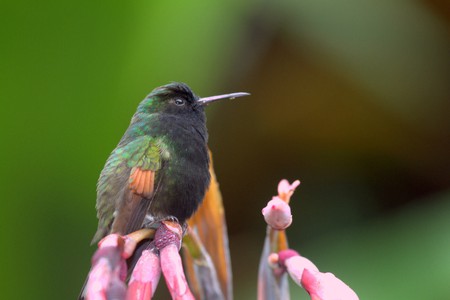 The volcano hummingbird, which is also referred to as the rose-throated hummingbird, lives only in the mountains of Costa Rica and in Chiriqui, Panama. This tiny hummingbird weighs less than 0.1 ounces (3 grams). The females are slightly bigger than the males. Their two favorite flowers are salvia and fuchsia, but they dine on multiple other species of brightly colored forest flowers. Like other species of hummingbirds, they sometimes eat spiders and other small insects for an extra protein punch.

The scintillant hummingbird is the smallest hummingbird in this region. It typically resides along bushy forest foliage, in coffee plantations, and sometimes in gardens within its habitat range. These tiny birds weigh it at around 0.07 ounces (2 grams) and are only 2.5 inches (6.5 centimeters) long. If you want to spot one of these miniatures, you definitely have to fine-tune your vision! The males have a bright red under-throat and chest area, while the females are a bit more plain. 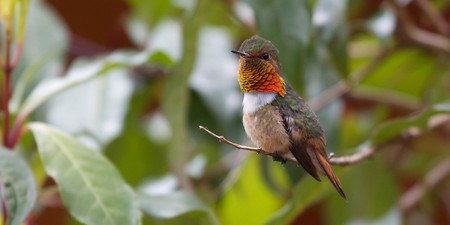 Endemic to the Pacific Lowlands and Western Pacific Side of Panama

The charming hummingbird, also known as the beryl-crowned hummingbird, lives in open woodlands, forest edges, coffee plantations, and even in gardens with flowering trees and plants in the South Pacific between Costa Rica and Panama. Male charming hummingbirds often congregate in groups of up to 12. This species breeds all year long, but the peak season is during the dry season months. They especially love feeding on heliconias.

Avid birdwatchers will spend hours to years looking for specific types of birds, such as the hummingbird species in Costa Rica. However, if you want to see an abundance of hummingbirds in one place during your visit to Costa Rica, then you should visit the La Paz Waterfalls Gardens. These gardens are home to 26 species of hummingbird! You can also see some of Costa Rica’s butterfly, frog, snake, monkey, and wild cat species here.