An Introduction to Costa Rican Art in 6 Captivating Artists

Costa Rican life © Francisco Arighetti
When most people think of Costa Rica, they think about the beautiful beaches, biodiverse rainforests, and the abundance of adventurous activities, such as zip-lining, whitewater rafting, and surfing. However, the art world, both past and present, is a very rich part of Costa Rica’s colorful culture that should not be missed. There are quite a few very impressive artists that come from Costa Rica.

Master of all arts

Francisco Amighetti is one of the most impressive artists, not only in Costa Rica, but in the world. From a young age, he showed immense artistic talent and, while classically trained, he abandoned that training in his early adult life to pursue a wide range of artist expressions. He created over 500 individual pieces of art in his lifetime. He expressed himself through surrealist and abstract art, watercolors, oil paint, sculpture, impressionist landscape painting, and even intricate woodcutting. Some of his work has a permanent residence at the Museum of Costa Rican Art in San Jose. 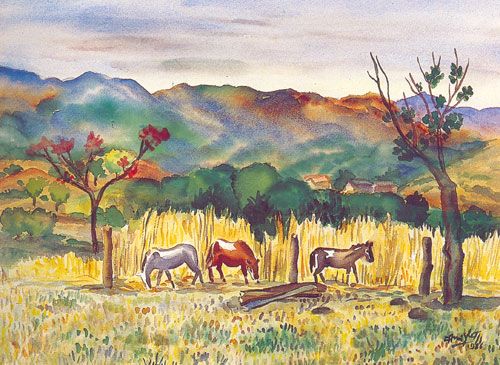 In the later part of the 1920s, Teodorico Quiros Alvarado, along with several other artists, formed a group called the Group of New Sensibility. Alvarado is one of Costa Rica’s most famous landscape artists and the leader of a great art movement. Alvarado and the other artists of this group created art that portrayed authentic Costa Rican life, including the quaint communities, vibrant colors, and stunning settings of the country during this period.

Manuel de la Cruz Gonzalez Lujan created a vast collection of landscape, abstract, and cubism-style art during the 1920s and 1930s. He was part of a generation of nationalists, who at the time were working to save native landscape art from the Central Valley. He had, and still has, a great influence on the art world, especially in the abstract art realm. Over the course of his art career, he won a lot of awards for his unique creations.

Rafael Angel Garcia was born in Costa Rica, but spent a significant part of his early life abroad. Before he was an artist, he was a professional soccer player in Havana, Cuba. It was there that he met Manuel de La Cruz González, who encouraged him to explore painting as a means of self-expression. He continued to play soccer and eventually ended up playing on the Columbian team while he also took several jobs where he was able to use his painting skills. He then ended up meeting Teodorico Quiros Alvarado and worked alongside him, while further developing his artistic skills, especially in landscape and architecture.

Jorge Gallardo studied art extensively in Madrid, Florence, Rome, Paris, and Mexico before returning to Costa Rica. While in Europe and Mexico, Gallardo met and became inspired by several important figureheads, like Octavio Paz and Giovanni Papini. Once back in Costa Rica, he began painting exquisite scenes depicting everyday life in his home country. He used bold colors and strong lines in his lifestyle paintings. Gallardo also was an accomplished poet and novelist.

Jack of all trades

César Valverde Vega studied many different topics and held many different positions in Costa Rica. He studied art and law in Costa Rica and also in Spain, France, and Italy. He was deemed one of the most influential artists and members of society in the 20th century in Costa Rica. Aside from being a prolific artist and author, he was also a government official, lawyer, and teacher. In the 1970s he returned to the University of Costa Rica, where he devoted his time to painting and being a professor and the director of fine arts. Vega also published several books.