How to See Ocean Atlas – the World's Largest Underwater Statue 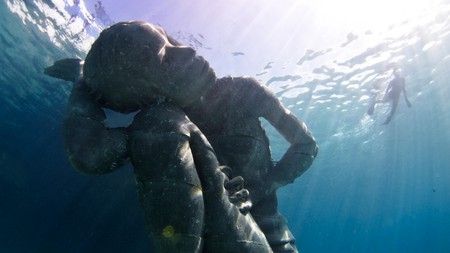 Here at Culture Trip, we love a good statue, although all too often our view of the masterpiece in question is obscured by selfie sticks and other people, all of whom are jostling to line up the perfect shot. For this reason, we’ve decided to highlight the world’s largest underwater statue, which you’ll find in the Bahamas – one of the best destinations in the Caribbean for snorkelers, scuba divers and travelers exploring the region by yacht. The best bit? Crowds are few and far between. In fact, the only thing likely to ruin your shot is a passing sea turtle, which sounds like a pretty cool photobomb to us.

Navigate your way to Ocean Atlas in the Bahamas by chartering a boat with SamBoat. Alternatively, make it a full sailing vacation with Dream Charter.

Where is Ocean Atlas?

You’ll find Ocean Atlas, a spectacular underwater sculpture by Jason deCaires Taylor, off the western coastline of New Providence, which has the largest population of any island in the Bahamas. It’s also where you’ll find the Bahamian capital, Nassau. Ocean Atlas is the world’s largest single underwater sculpture, and it doubles as a navigational aid, with a flag attached to the top poking above the water. 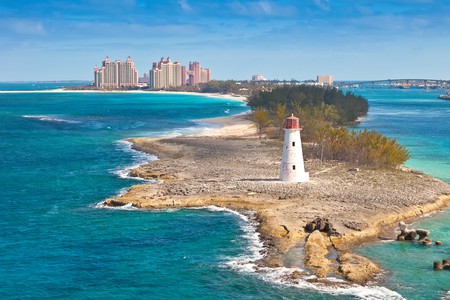 What is the story behind Ocean Atlas?

The sculpture, which depicts a young girl carrying the weight of the ocean above her (a nod to the Greek myth about Atlas, who held up the heavens) is just 5m (16ft) below the waves, which means both snorkelers and scuba divers can admire the 66-ton (60-tonne) artwork.

Along with being an attraction for travelers, it serves as a magnet for marine life. Built with pH-neutral materials, which allow it to double as an artificial reef, it has boosted local coral diversity.

Its popularity has also helped draw visitors away from some of the Bahamas’ most popular diving sites, many of which have seen reef-related damage due to over-tourism.

What other underwater sculptures are there in the Caribbean?

Ocean Atlas was commissioned by BREEF (Bahamas Reef Environment Educational Foundation), which has been responsible for several other underwater masterpieces. Although Jason deCaires Taylor’s sculpture is the most famous piece of local underwater art, it’s actually part of a sculpture garden that dates back to 2014, when BREEF commissioned three artists to design underwater sculptures.

The other two were designed by Bahamian artists: Willicey Tynes, whose sculpture Virtuoso Man depicts a man holding a staff, kneeling on the seabed and gazing towards the surface, and Andret John, whose Lucayan Face sculpture – an enormous face embedded in the seabed – was inspired by the Lucayans, who were the Bahamas’ first inhabitants.

You’ll also see several of BREEF’s reef balls near Ocean Atlas. These artificial concrete balls are filled with holes that are popular hideouts for creatures such as sea urchins, which help to keep the coral healthy. The balls also act as artificial reefs and many are covered with intricate sea fan corals.

How do I get to Ocean Atlas?

The best thing about Ocean Atlas is its accessibility, just off the waters of New Providence, which many visitors use as a base to initially fly into. To get there, simply head to Clifton Heritage National Park on Southwest Road. From the car park, walk to the Clifton Heritage National Park Gift Shop & Museum, where you can pay the small fee to snorkel the site. Start by checking out the hut on the beach – there’s lots of information about the sculptures. From there, you’ll be able to see the location of Ocean Atlas, which is marked by a cluster of buoys.

Where else can I snorkel and scuba dive off New Providence?

There are brilliant dive sites all around New Providence. Goulding Cay, to the west of Nassau, is a top spot to see eagle rays, moray eels, snapper and elkhorn coral, while Thunderball Reef, to the northeast of Nassau, has some beautiful species of coral, including feather and brain corals. When it comes to guided snorkeling and scuba-diving trips, one of the most popular locations is the Fish Hotel dive site, off New Providence’s northeastern tip. This particular site is best suited to scuba divers, who can expect to see a wide range of marine life, including angelfish and barracuda.

Set sail to Ocean Atlas by chartering a yacht for the day with SamBoat. Alternatively, weave it into a multi-day sailing adventure with Dream Yacht Charter.