Uzbekistan's Samarkand And The Legacy Of Its Ruler Tamerlane

The ancient capital of Samarkand was transformed by Turkic ruler Tamerlane in the 14th century into the most magnificent city in central Asia, inspiring writers, composers and artists. In 2001, Samarkand was added to the UNESCO World Heritage List, in recognition of its place at the pinnacle of Uzbek culture. 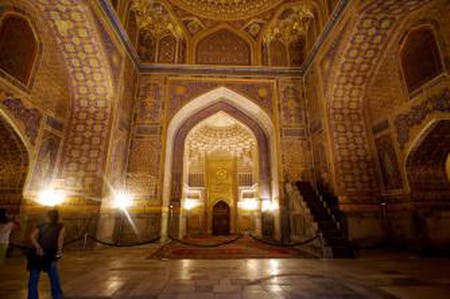 “If you want to know about us, examine our buildings”, so reads an Arab proverb inscribed into one of the monuments constructed under the rule of Tamerlane, the great 14th-century military conqueror of west, south and central Asia. When walking through Samarkand, in present-day Uzbekistan, one can still marvel at architecture originally constructed during Tamerlane’s rule. The Registan, one of Tamerlane’s greatest architectural achievements, remains at the historical heart of Samarkand. It is a great square flanked by three majestic madrassa, featuring typically-Timurid hues of vibrant emerald, azure, blue and gold. Monuments such as the Juma Mosque, Gur-Emir Mausoleum and Shahi-Zinda Architectural Ensemble still stand today as evidence of a city that, at its peak, was the richest in central Asia. 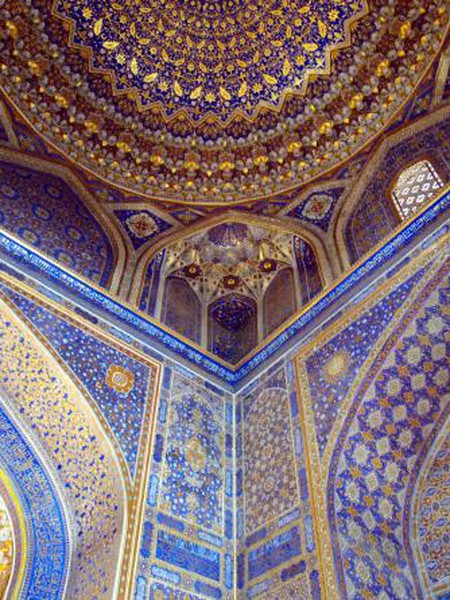 Centrally located along the silk route, Samarkand was chosen by Tamerlane to be the capital of his vast empire. Tamerlane was a great Tartar warlord born near Samarkland. Known more commonly as Timur, from the Turkic word meaning ‘iron’, few names have evoked such fear as his. Although he is said to have been illiterate, Tamerlane showed a great interest in culture and the arts. While he developed a reputation for mercilessly massacring entire cities, leaving towers of decapitated heads in his wake, he would also bring back skilled artisans and, over the 35 years of his rule, he used them to transform Samarkand into the jewel of his empire.

When, in the year 1370, Tamerlane seized Samarkand as his capital, he rid the metropolis of much of the existing architecture, just as Genghis Khan had done when he conquered the city in the 13th century. Tamerlane demonstrated his great dedication to the arts by sparing the lives of the city’s great arts and craftsman, taking them on to rebuild the city in his name. Greatly involved in the process of construction, he is known to have requested that buildings be entirely rebuilt if he was unsatisfied with the outcome. We are given insight into this period of development in Samarkand from the account of Henry III’s ambassador, Ruy Gonzalez de Clavijo, who was stationed here during the first decade of the 15th century.

The allure of the legend of Tamerlane and his beloved city of Samarkand travelled well beyond central Asia and has inspired great works from writers, composers and artists such as Edgar Allen Poe, James Elroy Flecker, and George Frederic Handel. Christopher Marlowe wrote of Samarkand:

‘Then shall my native city, Samarcanda…
Be famous through the furthest continents,
For there my palace-royal shall be placed,
Whose shining turrets shall dismay the heavens,
And cast the fame of Iion’s tower to hell.’

Having been recognized as a UNESCO World Heritage site and immortalized in countless artistic representations, the city will no doubt continue to inspire future generations.