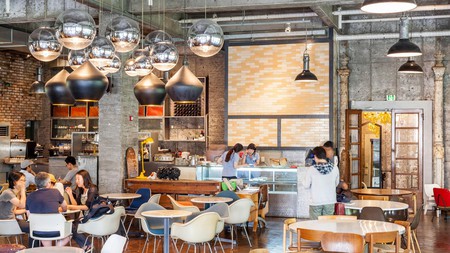 Gyeongju enjoys a broad and inventive café scene, serving up classy cuppas, hipster-cool blends and even traditional tea ceremonies. Here are the best places to get your caffeine fix in this historic city.

Coffee culture is booming in South Korea, and you will see signs of this all over the former Silla capital of Gyeongju. Perhaps unsurprisingly, given the region’s historical significance, traditional teahouses have been around here for centuries, and whether you’re looking for a warming brew or a full tea ceremony experience, there is quality in abundance.

South Korea’s coffee scene may be slightly newer, but it’s firmly rooted in Gyeongju. Tourist-oriented, thirst-quenching cafés neighbour all the major sights, while hip inner-city hangouts serve mugs of the latest blends, along with creative teas or bean-based concoctions. There are plenty of larger chains, but the independent coffee-shop scene in Gyeongju is excellent, with cafés that are fun, creative and catering to all sorts of people, be it a quick takeaway, a catch-up with friends or an ambient study break. So, if you’re looking for a decent pour-over brew, iced coffee or single-origin bean while in Gyeongju, here’s where to head. 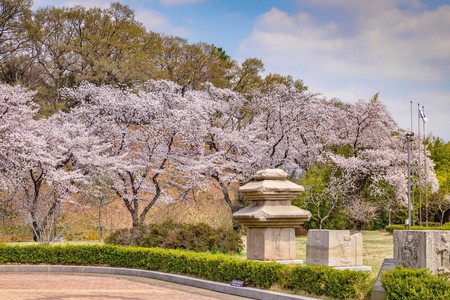 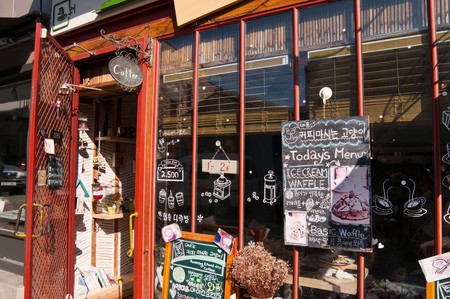 You may find that exploring Gyeongju is thirsty work, especially when visiting in the summer or exploring by bicycle, making the iced (or ‘frost’ as the café calls it) mocha an excellent antidote. And if you’re feeling hungry, then the indulgent icing sugar-dusted waffles come with a cup of whipped cream and a little pot of jam on the side. Cafe 737 lies along the main road between Gyeongju city and the national park, behind a breeze-block exterior wall. Although the building itself is designed to look like a hanok (traditional house), with a curving, thick-tiled roof, the interior is modern and minimalist, decorated in earthy tones. Design flourishes – such as the wall of USA license plates and the skateboard light fixtures – are inspired by owner Mr Kang’s time in North America.

Situated along a winding mountain road in the heart of the Gyeongju National Park, Baeknyeon Chatjip is the archetypal teahouse. Every little detail at this remarkable spot is thoughtfully selected to maintain the classic feel, such as the beautiful porcelain teaware and handcrafted wooden spoons. In Korean tradition, especially at this top end of the tea spectrum, expect to find things floating in your cup, from seeds to delicate flower petals, all designed to enhance the drink’s aroma and flavour. The sculpted garden outside, with its water features and small stone footbridge, is particularly lovely in spring or fall.

Kitsch and comfort merge in this eminently Instagrammable café packed full of curios and unusual furniture. While the skull-shaped entry signs and flower pots may well be a disembodied nod to Gyeongju’s importance as a burial place for the country’s former royalty, the wall of flowers and the ridiculously comfortable pod chairs certainly acknowledge the finer points of modern living. And if you’re not ready to recline, there are other quirky rooms, including one with a glass case full of superhero figurines in lieu of a wall. In addition to coffee, you can buy freshly squeezed juices, dinner from the Asian-European fusion menu and draught beer that is served topped with rather wonderful foam art.

As though it were trying to outdo Cafe Sabaha, Rhapsody in Blue takes the kitsch one step further. The coffee shop is located on the ground floor of the K-POP Museum, with its unmistakable Hard Rock Cafe-inspired giant guitar entranceway. Now if you’re puzzling over the modern Korean music craze’s connection to George Gershwin, well, there isn’t one – but there is a classical music hall next door. However, one thing’s for certain: this café’s interior decoration is like a mini-museum in its own right, with a display of old coffee grinders and another of ageing music equipment. It certainly makes for an interesting place to take a break with an espresso for a while.

Commencement for coffee, pure and simple

If one thing defines Commencement, it’s the café’s minimalist approach to both the decor and the coffee. The small space is filled with the smell of fresh coffee. Meanwhile, the ambience is welcoming, and the decor is limited to potted plants, handmade wooden stools and low tables. Unlike most of the coffee shops in South Korea, and in Gyeongju, the coffee here is kept simple and fresh. The menu takes things back to basics, populated exclusively by Italian-style brews such as the espresso, affogato and latte, with the vanilla latte being the only exception. If you’re taking a break from the caffeine, there’s a refreshing lemonade available.

No Words for indie coffee served in traditional settings

Not exactly one for the early birds, No Words tends to open in the late morning. This little gem is tucked away up a flight of graffiti-covered stairs. When you enter, the set-up almost looks like the laboratory of an eccentric coffee scientist, and the results certainly suggest some kind of delicious caffeinated wizardry is involved. If you have access to a coffee machine, coffees from all over the world are sold either as whole beans or freshly ground, in sealed foil packets. The shabby chic interior doesn’t immediately invite customers to stay, but the window seating offers a great vantage point from which to look out over one of the main burial mounds in Gyeongju.

Café Junkies (Jeongkiseu) for rediscovering the art of coffee making

Not one to mince words, Café Junkies openly acknowledges the coffee addiction that has gripped South Korea and turns feeding that need into an art form. For real aficionados of the hallowed bean, there is a fantastic array of single-origin pour-over brews from Central and South America, Africa and even a Yemeni variety. Junkies, or Jeongkiseu as it’s known when pronounced phonetically in Korean, also serves creative tea blends, such as the jamong (grapefruit) honey tea. In the warmer months, it does an excellent patbingsu, which includes sweet toppings poured over shaved ice. This coffee shop is tucked away in the northwest side of Gyeongju but is by far one of the best in the city and well worth the journey.