An Expert's Guide to Drinking Soju in Seoul 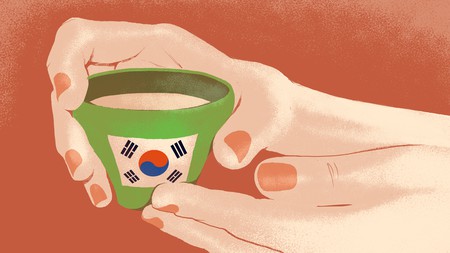 Soju is Korea’s most popular alcohol. You’ll find it everywhere from convenience stores to fancy restaurants. But “soju bars” are few and far between. Here’s your guide to Korean drinking culture, and where you can find soju in Seoul.

Julia Mellor has made it her mission to bring traditional Korean liquors into the international spotlight. She has studied traditional fermentation methods at some of the country’s best-known institutes, worked with artisanal breweries, and gained a fly-on-the-wall perspective of the country’s sool (the Korean word for “alcohol”) industry. She’s also a co-founder of The Sool Company, a business promoting traditional Korean alcoholic drinks, including soju.

“The green bottle [mass-produced, commercial soju] is very iconic to Korea. Everyone thinks that it’s the most traditional representation of Korean alcohol, but it’s actually not,” she says. “The green bottle was only introduced to Korea in the 1960s when there was a rice famine during the Korean War.” Go back to more traditional distillation styles, and there’s a whole world of sojus out there – if you know where to find them.

In Seoul, soju is everywhere. But finding more “traditional” styles isn’t often as simple as going to a bar; in fact, the concept of a “soju bar” is fairly alien to most Koreans. You’d be hard-pressed to find one in the South Korean capital, Mellor says. There are two important reasons why.

Firstly, Koreans often drink in a very different way to Westerners. Soju is drunk throughout the night and is usually paired with food in a restaurant. “It’s not really selected for its quality,” Mellor says. “It’s basically the conduit to get to know somebody.”

Secondly, it’s not all about soju. Korea is home to a host of other alcohols – in particular, makgeolli and cheongju, the latter of which was once the preferred drink of the royal court. These drinks are less well-known abroad; they are harder to export, as they’re drunk fresh and have a much shorter shelf life.

For a good quality soju experience, you’ll want to hit the traditional alcohol bars. They’re all over Seoul, and they’ll usually serve the full range of Korean liquors, including soju, makgeolli, takju and cheongju. Mellor notes that “the challenge is not where to go. The challenge is what to order”.

What is soju, exactly?

Soju is not strictly defined, meaning that it has plenty of variations. Traditionally it’s made through rice fermentation. But mass-produced sojus generally use another starch such as sweet potato – a hangover from the Korean War, when shortages caused the government to ban the use of rice in liquor production. If you’re simply looking to get drunk, then you can’t go wrong with mass-produced, green-bottle soju; mix it with beer (a combination known as so-maek) if you need to take the edge off.

But how can you tell what’s good soju? “There are so many complexities of what would create a good soju,” Mellor explains. The basics are the ingredients; rice, water and the fermentation starter unique to Korea called nuruk. Used in traditional fermentation methods, nuruk is a dry cake containing wild yeasts, koji mould spores and bacteria. As well as sweetness from the rice, Mellor says, “You should also have this slight, almost earthy kind of characteristic that comes from the nuruk“.

Where to buy and try soju in Seoul

For a down-to-earth (and wallet-friendly) soju-drinking experience, head to a pojangmacha (street food tent). Here, you can drink green-bottle soju paired with hearty street foods such as pajeon (a seafood pancake) or tteokbokki (rice cakes in a spicy sauce). There are pojangmachas all over Seoul, including glitzy Gangnam (between subway exits 11 and 12).

Have you really been to Seoul until you’ve drunk soju outside a convenience store? This is the ultimate budget soju experience (expect to pay around 1,700 won (£1.15) for a 335-milliliter bottle). You’ll see Koreans from all walks of life doing the same.

Don’t be put off by the name: “White Bear has two locations, one in Gangnam and one in Myeongdong,” says Mellor, “and they hands down have the largest selection of sool anywhere in Korea.” The owner is also an expert on sool (including soju), meaning that the selection isn’t just large, it’s meticulously curated. Look out for more unusual styles such as Moonbaesool, which has velvety notes of wild pear and a delayed, smoky heat.

This trendy bar and restaurant has over 120 different Korean alcohols. There’s a great food menu if you’d like to try drinking soju the Korean way, or you can just hang out at the bar. “They have an excellent selection,” Mellor notes. “They train all their staff in traditional alcohol… it’s my favourite bar in all of Korea.”

If you’d like to learn more about soju production, the Sool Gallery in Gangnam is the place to go. Housed in a space inspired by traditional Korean architecture, the museum educates visitors on traditional Korean alcohols. You can sign up for a free tour and tasting session to sample different types of sool. “Again, it’s not just soju. There’ll be makgeolli, cheongju and other drinks,” Mellor says. There’s also a shop where you can pick up some soju to take home – you won’t find green bottles here, but premium-quality brews.

Samhae Soju-ga is the only producer of traditional Korean soju in Seoul. “There are strict tax regulations in Korea, and a lot of them have to do with agricultural ties,” Mellor explains. “There are considerable benefits from having a brewery that also uses local rice. Obviously there aren’t a lot of rice paddies in Seoul, so it’s much more economical and a lot easier to brew outside of the main city.” Samhae Soju-ga is a special case, as it also functions as a cultural education space. Run by master brewer Kim Taek-song, you’ll find it in the narrow streets of traditional Bukchon Hanok Village.

Zac is unusual for Seoul. Here, the focus is firmly on drinks – not food. It’s in swanky Gangnam and feels like an upscale whisky bar. It’s all about traditional Korean alcohols, and is one of the best spots in the city to sample a soju cocktail. Owner-bartender Kang Byung-koo’s interest in sool started with home brewing, and he brings a wealth of knowledge to the bar. As well as mixed drinks, it’s a good (if pricey) place to try artisan styles such as Andong soju.