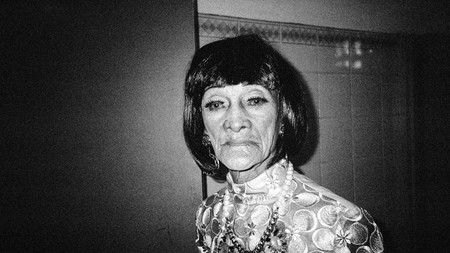 By day, they’re beauty salon technicians and street vendors. Come showtime, rhinestones and glitter transform them into the Golden Gays: Manila’s most senior troupe of drag queens. Despite their advanced years (at an average age of 85), these grand dames are not supported enough by the Philippine state – meaning they must lip-sync for their livelihoods.

Ramon Busa adjusts his bubblegum-pink wig, styled into a chic bob cut. It perfectly complements his black sequin dress and silver four-inch stilettos, making him tower, Amazonian-like, over the other drag queens. Here, in full costume and make-up, the trim 68-year-old goes by the stage name Monique de la Rue. Her sisters call her ‘mother’.

“Are you ready lolas?” Ramon asks the other performers in the cramped, Manila apartment. Lola is the Tagalog word for grandmother and a term of endearment for elderly gay men in the Philippines – which is particularly fitting for this glamorous group.

The queens are preparing to perform in the Golden Gays of Manila Beauty Pageant, held for poor and elderly gay men in Manila. Today’s performance features a live rendition of ‘If We Hold on Together’ by Diana Ross and a medley of kundiman classics (traditional Filipino love songs). 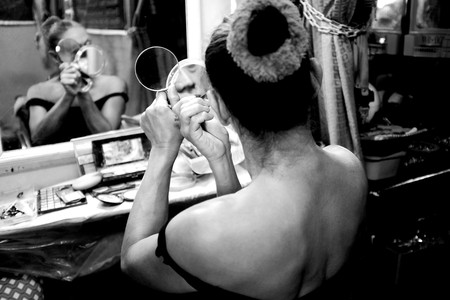 Ramon places an extra vibrant dress into a bag, just in case they win the crowd over enough for an encore. The dress is old through years of use but is still one of his favourites because it highlights his shapely legs.

Ramon and his sisters go by the name ‘The Golden Gays’. The name was originally derived from the Home for the Golden Gays, a care facility and refuge for senior gay men in Manila. LGBTQ rights activist and columnist Justo Justo, an icon in Philippine queer history, established the home in 1975.

A day after Justo’s passing in 2012, the group was evicted from the space by his family. They have remained homeless since – meaning they have no physical ‘home’ that they share. Some went back to their families, while those less fortunate took to the streets. 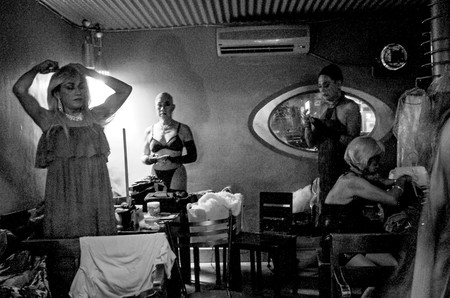 Members of the Golden Gays prepare for the pageant | © Shirin Bhandari

Yet even without a permanent base, the Golden Gays still exist today as a community that supports one another, headed by Justo’s close friend Ramon. The average age of members is 85, with the oldest being 92.

Justo once owned a house in a prestigious gated community, where Ramon worked as the administrator of the homeowners association. It was here where the pair met 20 years ago.

“When Jayjay [Justo] was still alive, we used to talk about the legacy of the Golden Gays,” remembers Ramon. “When he became sick, he requested me to help out after his death. 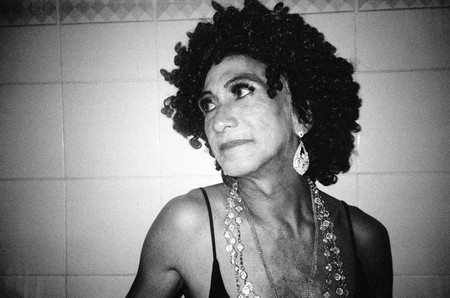 A contestant poses for the camera | © Shirin Bhandari

Changing attitudes in the Philippines

The Philippines is a predominantly Catholic country, with a reputation for being one of the most LGBTQ-tolerant places in Asia. Over 70 percent of Filipinos agree that homosexuality should be accepted, but the country is by no means free from discrimination. Growing LGBTQ advocacy and same-sex marriage are met with strong opposition from the Catholic Church and conservative groups. The nation also lacks programmes that secure the health and general welfare of the elderly.

With little assistance from the state, the Golden Gays have turned to each other for support. They are getting ready in the apartment of fellow member Rey Ravago.

Rey’s minuscule flat mostly serves as a meeting place for the performers to store their gowns and accessories. For some, like Rikka, it is their home. 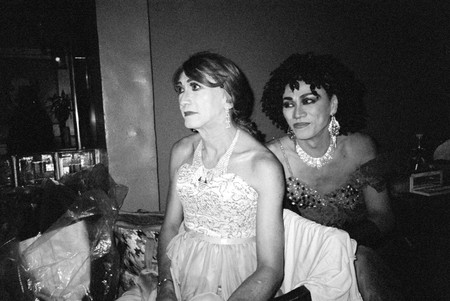 The Golden Gays support one another | © Shirin Bhandari

Rikka grew up in a conservative household in the Zamboanga province during the 1950s. His family, who could not come to terms with his sexuality, disowned him, and he has not been back to his hometown since 1969. He has since worked as a community sweeper and dishwasher, until losing his home to a tragic fire in 2017 – taking all of his possessions with it. Rikka, with no family in the city, was taken in by Rey.

The apartment costs 5,000 Philippine pesos (£74) a month to rent. When the income generated by the Golden Gays’ shows is good, the group pitches in to help Rey pay for it.

Rey, now 58, is a certified reflexologist and offers private massage services to earn a living. Originating from the northern Bataan province, with four brothers and four sisters, he has spent most of his life in Manila. “When my brothers found out I was gay, they would beat me up,” he says.

Rey eventually became a member of the Midnight Swards, a popular Filipino drag queen troupe that performed in Japan in the 1980s. From Dionne Warwick to Beyoncé, Rey specialises in lip-syncing and channelling the energy of iconic, American black divas. It is this talent, he explains, that eventually helped win his family over.

“When [they] saw my independence and how my talent brought me overseas, they stopped giving me a hard time.” 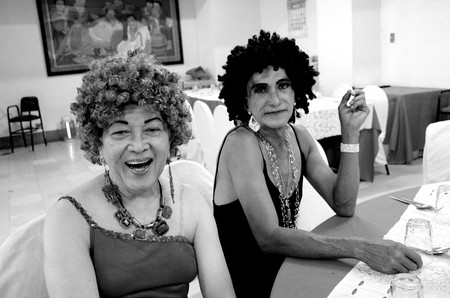 Lip-syncing for your livelihood

All dolled up, the queens leave Rey’s apartment and walk towards a rundown alley, leading to a modest local restaurant a few blocks up. The group cannot afford to hail a taxi. Traffic comes to a halt as the lolas strut down the street in vibrant gowns, complete with immaculate hair and make-up.

As they enter the Savory restaurant, the mezzanine transforms into a makeshift runway, where tables and chairs have been pushed back to make space for a stage. The hall is filled with the aroma of cheap perfume mixed with that of the fried chicken being prepared in the kitchen below. A rickety sound system loudly blares the latest nightclub tunes as a small crowd begins to arrive.

The Golden Gays rely heavily on organised events like this to earn money, backed by companies and organisations that support the LGBTQ community. Private sponsors in attendance may also offer to shoulder them a free meal for the day, or provide a week’s worth of groceries. Some even ask the group to perform at birthday parties.

The day’s sponsors are a group of young students from a top university in Manila. The queens pile into the small restaurant bathroom and make last-minute adjustments to their make-up and gowns.

Ramon, now Monique, takes the stage to roaring applause. Though his voice is soft and demure, he is today’s hostess extraordinaire, introducing each member to the crowd with pride. Members include Pepsi Paloma, Celia Rodriguez and Evangeline Pascual – drag names inspired by Filipino celebrities of the past. The audience is thrilled, meeting each queen with thunderous excitement as they twirl along the narrow catwalk. 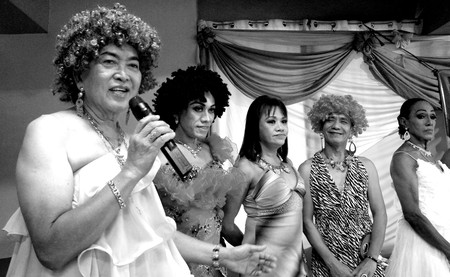 ‘Respect yourself, and you’ll receive the respect you deserve’

The event is not as refined as the polished sheen of RuPaul’s Drag Race, nor Manila’s legendary drag nights, but the Golden Gays make crafty use of the few resources they have. The gowns are slightly tattered through years of use. Most of the queens share their costumes, jewellery and make-up, which they source from thrift stores throughout the city.

The more rhinestones, feather and glitter, according to Ramon, the better.

It costs about $700 (£540) to put on a show. That includes a meal for about 20 performers, their guests, the use of the venue and sound system, and a grocery bag of food for each member. It is up to the individuals in the audience whether they tip a queen extra. At the end of the show, the sponsors act as pageant judges and crown the winners of the beauty and talent sections.

In the past decade, the Philippines has seen an increase in HIV/AIDS cases, with the highest rate of infection in Asia. The Department of Health expressed concern over what it calls an epidemic among gay men between the ages of 15 and 27 years old (who make up nearly 80 percent of new cases). Ramon uses the gathering as an opportunity to speak out on the issue.

“Respect yourself, and you will receive the respect you deserve,” he says, addressing the crowd. “We want to show young gay people that you can live a clean, healthy life despite the circumstances handed to you.” 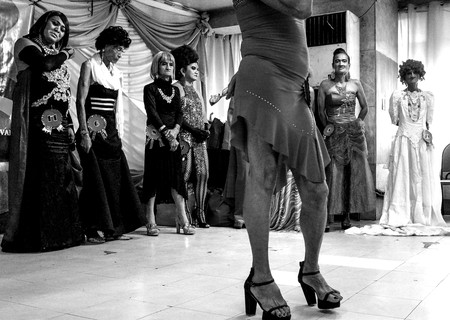 In search of a permanent home

After the glamour of the show fades, the Golden Gays will return to their odd jobs as beauty salon technicians, street vendors and dishwashers.

At least 20 percent of Filipinos live below the poverty line, earning less than 200 PHP (£3) a day. Events like this give the Golden Gays a few hours respite from the harsh struggles to survive in Manila, the world’s most densely populated city. People value and tolerate them as long as they have money and can earn a living – not so much when they are old and in need of care.

Ramon is not unaware of the fact that he’s getting older and welcomes new members each year to carry on the Golden Gays’ cause. Despite this, he has yet to find someone to replace him – someone who possesses the same passion as he does.

“I will only retire when I achieve the main mission of the Golden Gays,” he says. “That is to have a permanent residence for our members and future members.

“There have been several offers to fund a house, but none have pulled through so far. Every day is a struggle to survive, to put food on the table.

“But you learn to have faith and lead a simple life.”

The crowd demands an encore. Ramon returns as the poised Monique de la Rue – mic in hand and in his favourite dress that shows off his legs – leading the entire audience in song as he channels his idol, Diana Ross, like a queen. 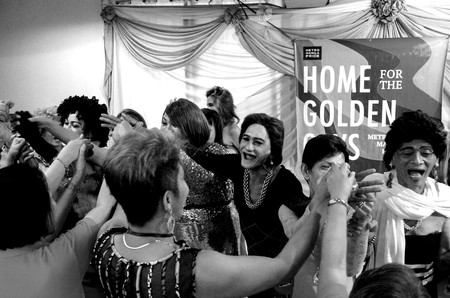