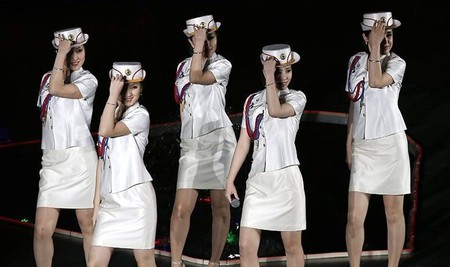 North Korea’s most famous pop group might be heading to next month’s Winter Olympics in South Korea – as long as they cut out revolutionary songs from their performance.

Hyon Song-wol, a member of Moranbong Band, an all-female group handpicked by Kim Jong-un, was the only woman sent by North Korea to meet with South Korea during a meeting on Monday, January 15 between diplomats to talk about participation in the Winter Olympics.

Her presence has fuelled speculation that her band, who perform in matching costumes, will be part of North Korea’s delegation to the Games next month in Pyeongchang, South Korea.

So far, the two countries have agreed that North Korea will send a 140-member orchestra to perform at the Winter Games, according to South Korea’s Ministry of Unification.

If Moranbong Band are part of the delegation, who are rumoured to be crossing the border into South Korea on foot, no attempts at propaganda would be tolerated, it has been reported.

Cheong Seong-chang, an analyst at the Sejong Institute in Seoul, told The Guardian: ‘If the Moranbong Band members, who are all formally military officers, come to the South in military uniforms, it could cause discomfort among many South Koreans.

‘And it would stir an even bigger controversy if any praise of Kim Jong-un or missile launches are featured on the stage during their performance.’

The band’s domestic hits include tracks like ‘Mother’s Birthday’, which pays tribute to North Korea’s ruling Workers’ Party, and ‘We Call Him Father’, a homage to the country’s leader, Kim Jong-un.