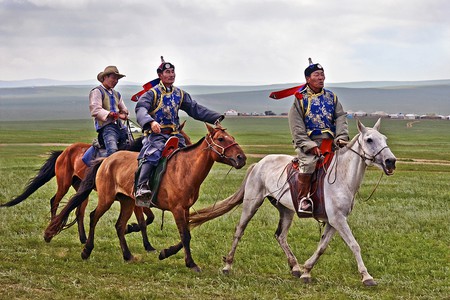 Mongolia: the country that got greedy when it came to picking a national sport. Instead of settling on one, like most other countries in the world, Mongolia managed to stockpile three sports – archery, Mongolian wrestling and horse racing – and the country has dedicated an entire national festival to them for good measure.

The Naadam festival is an annual three-day event that commences on July 11. Festivities are enjoyed locally throughout the whole country but the main event takes place in Ulaanbaatar, the Mongolian capital. The festival is a celebration of the country’s independence from China in 1921, at the time of the Qing dynasty. As well as celebrating the country’s autonomy, the Naadam festival offers attendees the opportunity to appreciate ancestral Mongolian attire (deel); enjoy traditional Mongolian food, like deep-fried meat dumplings, or khuushuur; as well as commemorating the Mongols’ traditional nomadic lifestyle.

Revelling in national heritage is the official purpose of the Naadam festival but for many who attend, sport is the main attraction. All three Naadam sports – archery, Mongolian wrestling and horse racing – were initially intended to select men for military combat in formidable cavalry armies of great Mongol leaders like Genghis Khan. Any entertainment factor was both secondary and coincidental in the original Naadam. After Mongolia gained autonomous statehood in the 1920s, Naadam began to take its modern form as a celebration of national independence, leaving its original battle orientation to the realms of history. Although the festival is sometimes referred to as ‘the three manly games’, nowadays women compete in the archery competition and girls can ride as jockeys in the horse racing event.

Originally, bows and arrows served as hunting tools before they were incorporated onto the battlefield. However, they quickly became one of the most symbolic weapons of warfare, and remained so until they were replaced by the invention and widespread dissemination of gunpowder and firearms. Archery served to distinguish individual warriors with strong eyesight and good hand-eye coordination. Although many Mongols of the past were horse archers, Chinese domination of Mongolia from the seventeenth century involved a systematic pacification of the natives. This saw them forced into Buddhist monasteries where they were made to abandon their horses and could only secretly practice their battle skills with miniature crossbows in their yurts. When Mongolia regained its independence, the new government sought to establish Mongolian culture by re-establishing Naadam and, with it, the the great Mongol tradition of archery.

Archery is regarded as an advanced form of mental and physical training. Archers of all ages compete, wearing traditional Mongolian attire, in any of three categories. Khalka archery refers to the form practised by Mongolia’s majority ethnic denomination of the same name, from the country’s central region. Meanwhile, Buriat and Urianghai are variations which respectively originated within two eponymous minority groups in northeastern and western Mongolia. Tradition demands that judges, singing the ancient uukhai, stand near the target and use hand signals to indicate the score of each competitor. The form of archery practised governs the style of the vocals involved. Winners are rewarded with the title of mergen, or marksman, with subsequent victories earning additional epithets, ranging from ‘Super’, ‘Miraculous’ and ‘Most Scrupulous’ through to ‘Nationally Memorable’ and ‘Invincible’.

Hitting a ground-based target, made from hide or sinew, is the aim in all three archery categories. Differences include the distance of the target and the bows and arrows used. While men, women and children compete in separate competitions in Khalka and Buriat archery, the Urianghai variation is reserved for men. The distance a competitor shoots from is determined by their gender and, if relevant, their age and the category in which they are competing.

Buriat archers shoot from a range of 35 meters and Uryankhai from 45 meters, while Khalah archery involves the greatest distance, with men standing 75 meters from the target in the zurkhai (target area), and women standing 65 meters away. Meanwhile children under eighteen have their range dictated by their age, based on multiplying a boy’s age by four or a girl’s age by three to get a distance in meters.

Archeologists have discovered rock carvings depicting a wrestling activity in Ulziit, Dundgovi. They are believed to date back to the Mongolian Bronze Age (2,500 BC – 700 BC), which suggests that early manifestations of Mongolian wrestling preceded even the ancient Greek Olympics and were around long before the gladiators of ancient Rome. Wrestling was recognised by the Mongols as a practical way of identifying individual warriors who were skilled in terms of strength, movement and flexibility.

Mongolian wrestling is laden with references to the country’s Mongol past. Participants don traditional costumes, including somewhat impractical boots, and perform the time-honoured ‘eagle dance’ before every match. Male participants compete in traditional bare-chested costumes; this is because an old folktale tells of a woman who won the Naadam wrestling event disguised as a man. The wrestlers’ exposed garbs are intended to prevent any such deception from ever happening again.

Only wrestlers with a national ranking can compete in Mongolia’s largest wrestling competition in Ulaanbaatar. However, men, women and children as young as four years old participate in wrestling events at a local level. The rules are fairly straightforward – one wrestler contends against another, using strength to force each other to the ground. The bout continues until one wrestler touches the ground with their head, knee or elbow and they are forced to accept defeat. Notably, Mongolian wrestling has no weight classes so it is not unusual to find a slender sixteen-year-old boy tenaciously grappling with a muscular forty-year-old man.

Many elements of contemporary Mongolian culture stem from the long, nomadic history of the Mongols. These range from rural Mongolians living in gers – temporary yurt-style structures that are easily erected and collapsed – to the Mongolian people’s traditional affinity with horses. In the past, endurance horse racing was an activity that served to test the patience and bravery of individual warriors. Besides their use in warfare, horses were reared to provide transportation, sustenance, companionship and racing contenders. Above all, horses were working animals with which Mongols felt a strong spiritual connection. This bond still exists between Mongolians and their horses today.

Horses and jockeys alike undergo several months of training in the lead up to the Naadam festival. Victory aside, there is a lot to be gained for horse trainers because they are rewarded with accumulative lavish titles if their horse wins the main event in Ulaanbaatar. During the festival, hundreds of thousands of horses race all over the country, throughout Mongolia’s 21 provinces and 329 soums. While horse trainers are adults and often have decades of experience participating in Naadam, jockeys are children, usually aged between five and thirteen.

At the Naadam festival, horses race in different categories according to age, and distances covered can range from ten kilometers to twenty-six kilometers. In hope of victory, jockeys indulge their horses with a gingo, a special song to boost their horses’ spirits. Winning jockeys are bestowed with the title Tumenii ekh, or ‘leader of ten thousand’, while horses which come last are consoled with a song wishing them luck in next year’s race.

Eclipsing the Naadam horse race in terms of international fame, the Odyssean 1,000-kilometer Mongol Derby was inaugurated in 2009. Jockeys come from far and wide to participate in the race, which emulates the extensive postal route of Genghis Khan’s empire. It’s not a trail for the faint-hearted.

The opening ceremony of the Naadam festival in Ulaanbaatar includes shows that are intended for the enjoyment of tourists who flock from all over the world to see Mongolian culture in all its authentic glory. You can contact the festival organisers to get your tickets.