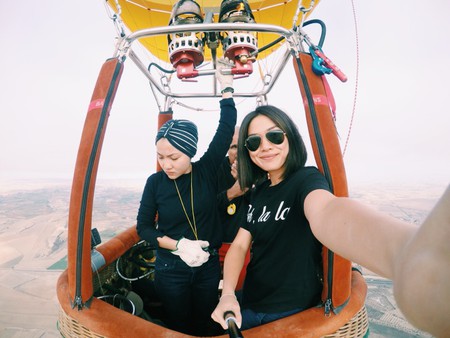 The sisters during their training in Igulada, Spain | Courtesy of AKA Balloon

A typically European activity, hot-air ballooning has been an exciting and unusual sport since the 1960s. The Balloon Sisters – Atiqah and Izzati Khairudin, have made national history by becoming the first female balloon pilots from Malaysia, Southeast Asia. In addition, they currently are also the ones behind Malaysia’s biggest hot-air balloon event, MyBalloonFiesta – an annual event showcasing hot-air balloons. 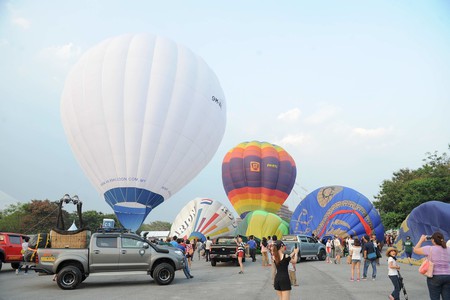 Balloon Park | Courtesy of AKA Balloon

By taking on responsibility for managing the ballooning event, the Khairudin sisters take after their late father, Captain Khairudin Abd Rani. Rani was a balloonist himself and kickstarted the MyBalloonFiesta under the family company of AKA Balloon in 1994. 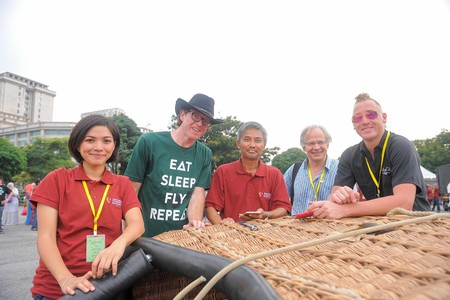 This year’s MyBalloonFiesta is themed ‘Balloon in the Park’, which suggests a relaxed environment, open to lounging and picnicking. At least 15 hot-air balloons and guest pilots from all around the world will be present, with five of them novelty-shaped. Atiqah says she is especially excited about the baby octopus-shaped hot-air balloon coming from Japan, along with the heart-shaped Happy Chan, and the Rooster from Thailand, all of which will be among the event highlights, as will the Saturday night firework finale. 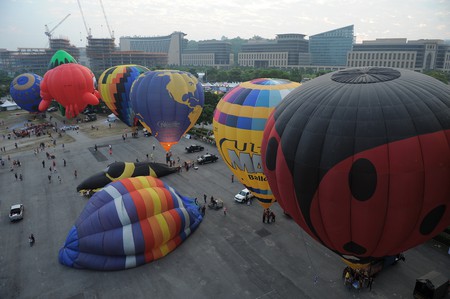 Pilots getting ready for the morning flight | Courtesy of AKA Balloons

Although the fiesta used to be called the Putrajaya International Hot Air Balloon Festival, they changed venue this year and also re-branded, changing concept. Different from the upscale atmosphere of Putrajaya, their new location in Desa ParkCity, offers a more intimate experience with the balloons, there are also more green areas; the whole space is double that of the Putrajaya venue. Complete with carnival attractions such as Zorbing and a night-time open air cinema, the ninth MyBalloonFiesta promises to be a whole new rendition. Promised also is a silent disco, taking place within a hot-air balloon. Here, patrons will be provided with wireless headphones which will allow them to enjoy music uninterrupted by normal disco nuisances such as yelling. 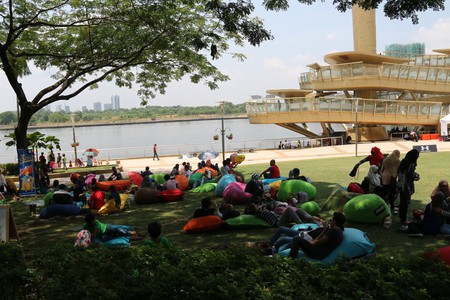 MyBalloon Fiesta Picnic Area by Doof | Courtesy of AKA Balloon

The Khairudin sisters have worked in the company since their university days, juggling semesters and part-timing but decided to take things further by earning a balloon piloting licence in 2015, when they finally raised enough funding. Inspired by their late father and their own bucket-list goals, they found ballooning to be a natural career due to its prevalence in their lives. Once they had completed their ballooning training in Spain, Atiqah and Izzati returned full of drive to carry on their family’s legacy and to follow in their father’s footsteps.

The sisters during their training in Igulada, Spain | Courtesy of AKA Balloon

After eight years of running MyBalloonFiesta, the sisters continue to be surprised at the increasing amounts of people that attend every year and are even more determined to bring smiles to everyone’s faces. Running the festival has reduced their opportunities to fly on the day of the fiesta, but the Balloon Sisters insist that they would fly a balloon on a whim if the chance arises.

Despite Malaysia’s hot weather and the fact that ballooning is a niche market this side of the world, the Khairudins and their company don’t let the location and expenses hinder them. They garner support from both locals, and from overseas events, through meticulous planning and, of course, by attending other festivals as guest pilots.

The change in venue has brought a lot of new challenges with it, but the sisters admit that the switch up has been a learning experience and that by hosting the fiesta in Kuala Lumpur, even more people can experience the beauty that is hot-air ballooning. 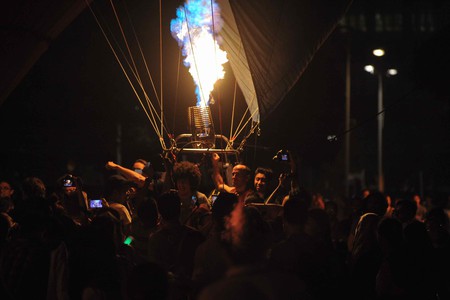 Main highlight of the event, the Night Glow Show | Courtesy of AKA Balloon

The MyBalloonFiesta has been nothing but a great platform for people to get to experience older aeronautic methods and meet the skillful and passionate pilots behind them. The sisters don’t plan to stop just there though, and have already been putting into motion plans to spread the love for hot-air balloons in Malaysia. 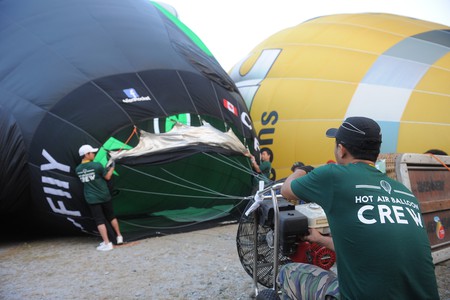 Crew assisting pilot during the inflation | Courtesy of AKA Balloon

Apart from having the idea to set up a balloon production company in Southeast Asia, a more sustainable model than continuously shipping all the way from Europe, the Balloon Sisters have also established Life on Air tours right here in Peninsular Malaysia, which provide expedition-like opportunities for people to explore Malaysia from a bird’s eye view. This year they are even looking to expand to Borneo, which has the biggest and oldest lush rainforests this side of the world. A side business also involves My Balloon Adventure, where the sisters provide commercial rides to people visiting Putrajaya. 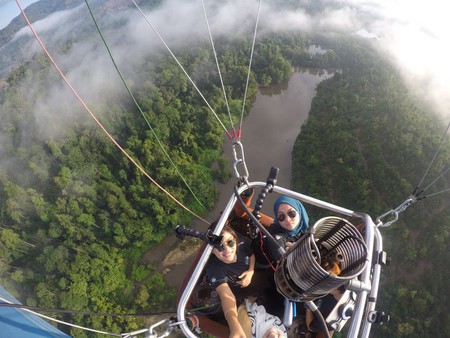 Breathtaking view of Kuantan from above | Courtesy of AKA Balloon

Their intense love for hot-air ballooning has admittedly had drawbacks from time to time. They note that ballooning is very reliant on the weather, and a noticeable change in wind and rain activity keeps them on their toes; but hasn’t yet managed to ground them. The small space of the balloon basket isn’t great for long trips either, as being siblings, they are sometimes prone to little disagreements. 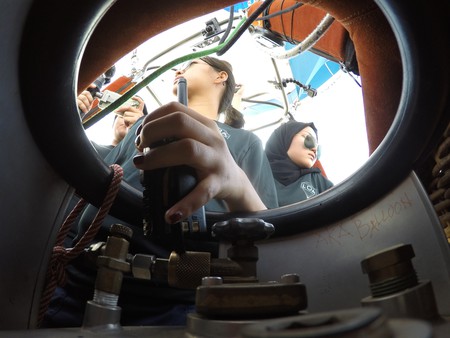 The Balloon Sisters flying above Perak | Courtesy of AKA Balloon

With the ninth MyBalloonFiesta this weekend, and the 10th milestone coming up next year, the Khairudin sisters are all geared up to deliver. No solid plans have been made for next year as of yet, but it is promised to be even more special. Some advice they have for attendees is to wear covered shoes – especially for those who signed up for the balloon riding – and comfortable summer clothing. Picnic items are encouraged, but guests will not have to bring their own food, as many stalls will be available on-site. Unfortunately pets are discouraged, as they will be sensitive to the sounds of the hot-air balloon burners. 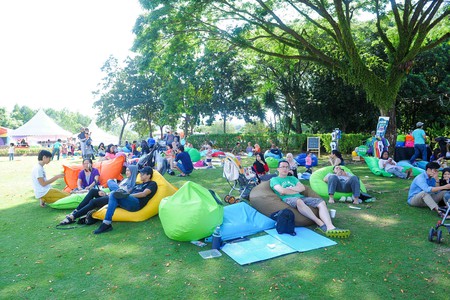 The ninth MyBalloonFiesta will be held at Desa ParkCity this weekend, March 10–12, 2017 from 4pm to 10pm. Tickets are available from the website, and cost RM300 (US$67) for adults and RM250 (US$56) for children, these prices include tethered balloon rides in the morning session.