The Top Things to See and Do in Genting Highlands, Malaysia 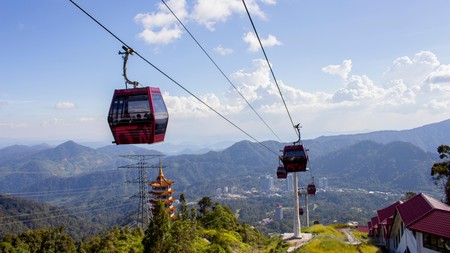 Take a journey to the Genting Highlands in Malaysia, known for its cooler weather and luscious mountains. Here, you’ll find local farms, restaurants, entertainment venues and panoramic mountain views. Read on to find out how to make your trip memorable, with our list of the best things to see and do at the resort.

It’s packed with rollercoasters, drop towers, themed rides, shops and fast-food restaurants – and that’s why SkyWorlds is one of the top amusement parks in Malaysia. It has nine movie-themed areas based on 20th Century-Fox franchises. These include Rio, Robot Rivet Town, the Andromeda Space Base, Eagle Mountain and Central Park. Liberty Lane is a cool street of shops and eateries dressed up to look like San Francisco, and the neo-art-deco main studio plaza looks like a building from the Golden Age of Hollywood.

Shop and dine at Sky Avenue 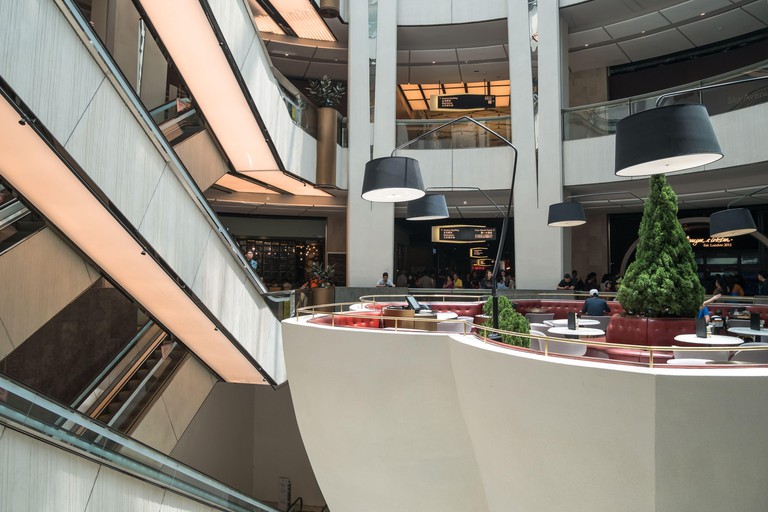 © wai yee thang / Alamy Stock Photo
This huge shopping mall in the heart of Genting’s busy resort village is one of the largest in Southeast Asia; with four floors of local and international brands (including big-name European and North American fashion labels) and entertainment facilities. There’s a cavernous food complex with Chinese, Indian and European food outlets, a casino and a state-of-the-art cinema. The Awana SkyAvenue cable car docks on the top floor, and the 6118-room First World Hotel is adjoined to the mall.

With all the theme parks and casinos, it can be easy to forget that Genting is immersed in the rainforest. The Gunung Bunga Buah trail takes you there, on a 14km (9mi) trail following an abandoned asphalt road beginning at a trailhead behind the Gohtong Jaya shopping precinct. There are good views along the route (especially from the rock garden immediately before Gunung Bunga peak) and plenty of wild orchids and butterflies. Just be sure to watch out for leeches in the rainy season.

The Genting highlands are tropical, but that doesn’t mean things can’t get wintery – this indoor theme park is literally sub-zero. There’s even falling snow, as well as igloos and toboggan slides – all inspired by European winter scapes – with ruined castles, knights in armour and palaces, where you can pose with a portly king over a lavish banquet. Snow World is situated on Level 2 of the huge First World Plaza, one of the largest malls and entertainment complexes in Southeast Asia.

Take a cable car ride up across the highlands 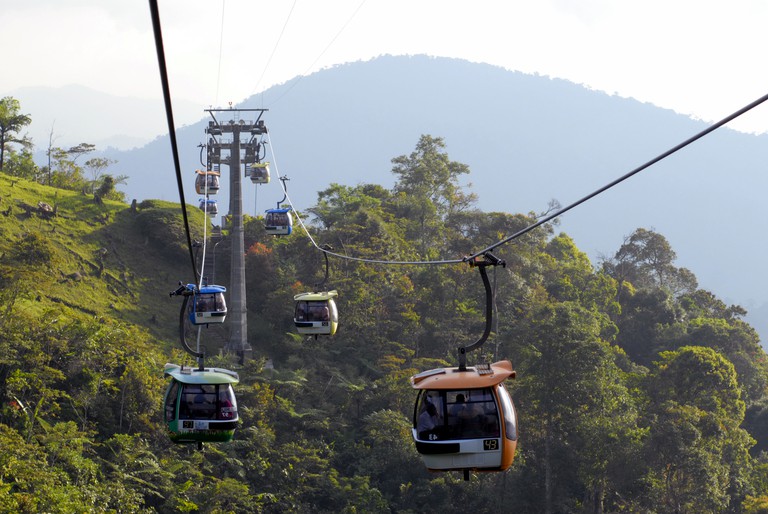 Getting to Genting is an event in itself if you board one of the glass-fronted SkyWay cable cars that ascend from Awana or Gohtong Jaya villages, passing over steep ridges covered in rainforest. Keep your eyes peeled as this is your only chance to see wildlife in the tree canopy – the region is a stronghold of rare birds. Take a ride early in the morning or late in the afternoon to see hornbills, whistling thrushes and iridescent blue-eared barbets. And, if you want to explore further, bird-watching guides can be organised through Genting concierges.

Hidden in the forested hills between Genting and neighbouring Bukit Tinggi is this waterfall, 30m (100ft) high, plunging over granite rocks into a series of cool pools. It’s a tranquil spot where few tourists venture, and the surrounding rainforest is teeming with wildlife, including rare hornbills that are beautiful to behold. To reach this impressive sight, follow the dirt road that runs from behind the Midhills Resort in Genting towards the Brahma Rishi Hill Temple – you’ll find them a few hundred metres (feet) further south.

Tze Char restaurants are the Chinese-Malaysian equivalents of bistros: no-frills eateries serving Hokkien Chinese home-cooking, eaten communally with friends. Despite being a simple space – with white tile floors and plain furniture, Chuan Kie in the small village of Gohtong Jaya is the most celebrated Tze Char restaurant in Genting. Snapshots of Malaysian celebrity diners adorn the walls, and dishes are made to recipes conceived by owner Madam Chan Lai Fun, who opened Chuan Kie in the 1970s. 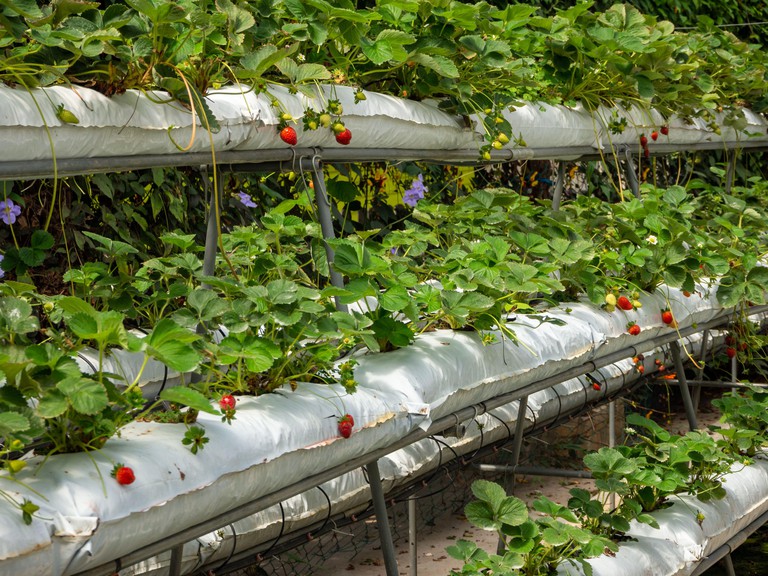 Before heading up to Genting Highlands Resort via cable car ride, we suggest doing a few activities at Gohtong Jaya. Visit the Genting Strawberry Leisure Farms to get your freshly picked strawberries. Pluck the big and juicy strawberries, and eat them on the spot, or take them with you as delightful treats to-go. A small box of 100g (3.5oz) of strawberries is about 8 Malaysian ringgit (£1.40). Take some photos at the Lavender Farm before you enjoy your delicious strawberry delights at the cafe. Discover various herbs, mushrooms and vegetables at the farm.

Entertain yourself at SkyCasino

With more than 400 gaming tables, 3000 slot machines, a myriad of ATMs and an adjoining food court overlooking the rainforest, the largest casino in Genting keeps its guests completely entranced. The casino sits inside the SkyAvenue Shopping Mall and operates 24 hours a day. With no windows or clocks in the main salon, and huge LED screens broadcasting competitive gambling tournaments, it’s easy to get totally absorbed in the fun and games.

Have your lunch at the charming town of Gohtong Jaya, where you can find a variety of Chinese meals at places like Yik Kee Restaurant and Chuan Kie Restaurant. Crispy pork belly, steamed egg and vegetables are ideal dishes to order. Savour delicious fresh seafood, such as some steamed fish. Make sure to also treat yourself to some mouthwatering sweet durian tarts or cakes in case you get hungry later during your journey. 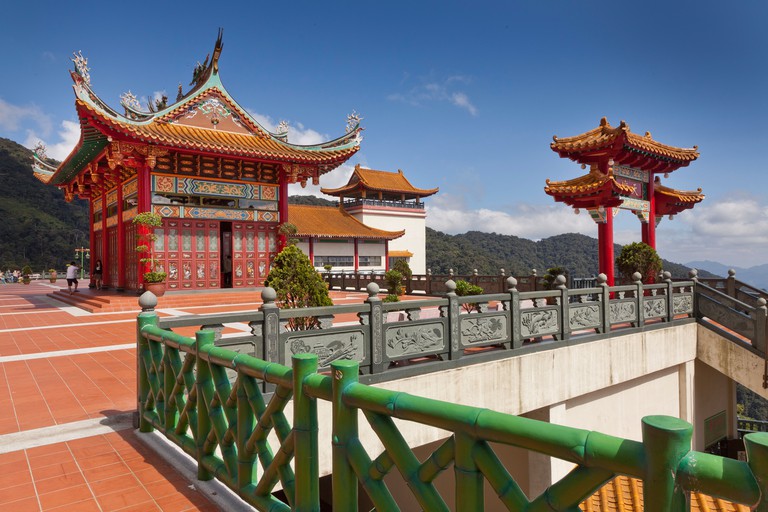 Make your way to the Chin Swee Cave Temple near Genting Highlands Resort. The temple was built in 1976, and devotees visit it to pray to Buddha and Kuan Yin. Learn about the teachings of Buddhism, and climb up the nine-storey pagoda, lit with 10,000 blessing lamps placed by devotees. Head over to the observation deck to view the mesmerizing panoramic view of the Genting Highlands.