The Most Spectacular Temples in Malaysia

Thean Hou Temple, Kuala Lumpur © Nokuro/Shutterstock
In Malaysia, the Buddhist and Hindu communities have their daily rituals and religious celebrations at the temples. Each temple has its own unique history and architectural designs, dedicated to their ancestors and holy deities. Here is the list of Malaysia’s most spectacular temples for you to start exploring.

Shrine
Hindu devotees frequently visited the Batu Caves Temple to make their prayers. They also celebrate Thaipusam together at the holy shrine, dedicated to Lord Murugan. The temple is located within the Gombak’s limestone hills (40 minutes train ride from Kuala Lumpur). The golden statue of Lord Murugan stands tall at the temple’s entrance with a flight of 272 steep stairs to climb up to the caves. This holy place consists of three main caves and a few smaller ones including the biggest one, Temple Cave. Each cave consists of ornate Hindu shrines, statues and paintings that tell the stories about how Lord Murugan defeated the demon Soorapadan.
More Info
Open In Google Maps
Batu Caves, Selangor, 68100, Malaysia

Buddhist Temple
Kek Lok Si Temple, Penang | © Pe3k / Shutterstock
Book Now
Kek Lok Si Temple is an ornate 19th century Buddhist temple located at the top of the hills of Penang Island. The interior and exterior of the temple halls, pagodas and archways are decorated with millions of beautiful images of Buddha and hundreds of outstanding detailed carvings, sculptures and murals. The detailed architectural designs tell significant meanings of Chinese culture and Buddhist teachings. There is an outdoor temple garden in which one can take walks while admiring the beautiful temple, including the three-tiered Kek Lok Si Pagoda with each tier having its own architectural style relating to Buddhism.
More Info
Open In Google Maps
Air Itam, Penang, 11500, Malaysia
Visit Facebook page

Buddhist Temple, Shrine
The majestic Thean Hou Temple with red lanterns, Kuala Lumpur | © Robert Wilson/Flickr
Thean Hou Temple, a six-tiered Buddhist temple, is known as the Temple of the Goddess of Heaven. It is also a shrine for worshippers to pray for Guan Yin, the Goddess of Mercy. The temple has detailed elements of Buddhism, Taoism and Confucianism along with contemporary architectural details and traditional ornate carvings. Admire the majestic entrance with red pillars and the temple’s dragon-inspired columns and pagoda rooftops. Explore the modern Buddhist pagoda and the octagonal hall enshrined with images of Buddha. Walk around the Chinese medicinal herbs garden and relax by the tortoise pond.
More Info
Open In Google Maps
65 Persiaran Endah, Taman Persiaran Desa Kuala Lumpur, 50460, Malaysia
+60322747088

Khoo Kongsi Temple is one of Penang’s iconic heritages that represent the Hakka community. The temple was built in the 19th century, decorated with stone carvings and murals of divine guardians, deities, immortals, carps and dragons. It is a gathering place for Chinese families with the surname to come to worship their ancestors. The temple maintains its unique history including an association house, a traditional theatre and rowhouses for the clan members gathered at a granite-paved square. The temple is located at the Canon Square in the heart of old Georgetown. 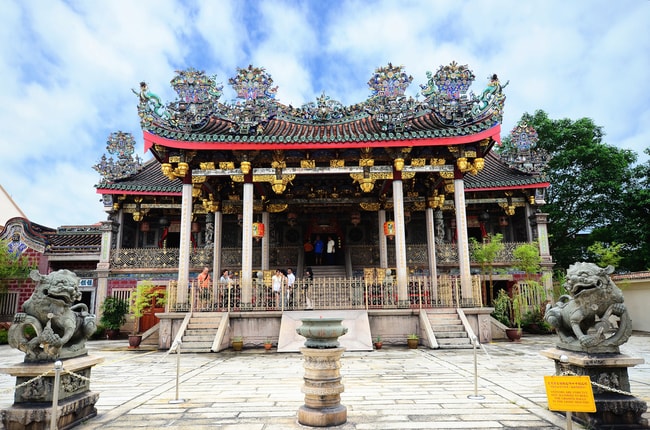 Built in 1950, the Snake Temple honors a Buddhist priest and healer Choo Soo Kong. According to a legend, the priest provided shelter for the jungle snakes which are believed to have become the priest’s disciples. After he passed away, these snakes made the temple their own home. Walk through the temple entrance and you will see a big incense burner in the middle of the temple hall with sculpted statues and carvings. Toward the back of the temple is a snake pool with fruit trees coiled with snakes. 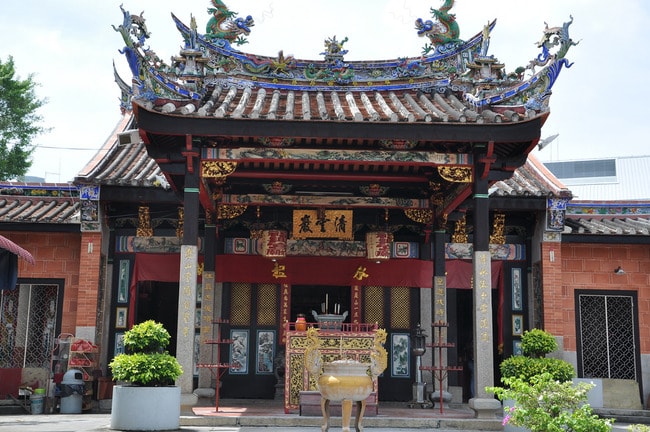 Hindu Temple, Shrine
Arulmigu Balathandayuthapani Temple, Penang | © Gwoeii/Shutterstock
The Arulmigu Balathandayuthapani Temple is known as the Waterfall Hill Temple or Hill Top Murugan Temple located in Georgetown, Penang. Based on an old belief, a holy man chose the spot near the waterfall for the shrine dedicated to Lord Murugan. Visitors need to climb up 513 stairs to reach to the temple. It is also one of the holy shrines, gathered with Hindu devotees to do their daily prayers and celebrate Thaipusam. The hilltop temple has a seven storey gopuram, embellished with statues of deities. Public rituals are normally performed at the pillared outer hall.
More Info
Open In Google Maps
17 Jalan Kebun Bunga, Pulau Tikus George Town, Pulau Pinang, 10350, Malaysia
+6042620202
Visit Facebook page

Sam Poh Tong Temple is located within a limestone hill of Gunung Rapat, Ipoh. It is a magnificent temple of art and faith, with various Buddhist statues among natural stalactites and stalagmites. Walk around the beautifully decorated pavilion and a mesmerising landscape garden with a fish pond. In 1993, this tranquil area was celebrated as Malaysia’s ‘Best Landscape Gaden’. Climb the 246-step staircase and be amazed with the views of Ipoh and the temple surroundings. Feed the turtles at the pond and wish for great fortune at the wishing well.

Ling Sen Tong Temple is a Taoist cave temple at the foot of a limestone hill in Ipoh, Perak. Its name is literally translated as ‘rock of heavenly spirits’. It is right next to the Sam Poh Tong Temple along Jalan Gopeng. The temple consists of many designs, such as animals, deities and other characters of Chinese folklore. You will find colourful statues of Chinese mythology, including the legendary Monkey King from the popular classic tale Journey to the West. 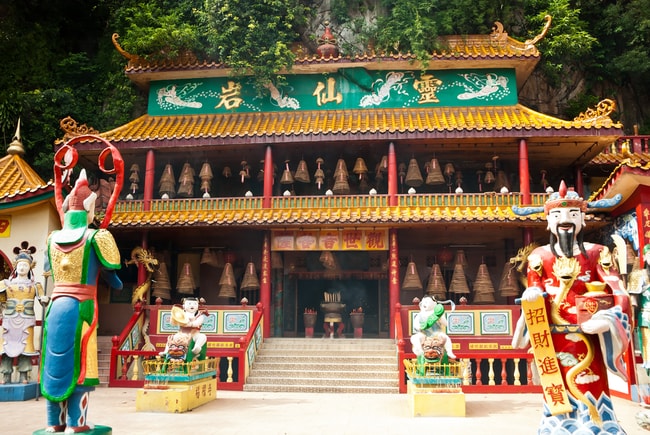 Chin Swee Cave Temple is at a rocky slope near to the peak of Genting Highlands Resort. The temple is a sacred place for devotees to pray to Buddha and the Goddess of Mercy. Discover the essence of Chinese traditions and beliefs within this religious temple. Explore the iconic nine-storey pagoda, lit with 10,000 blessing lamps placed by the devotees and figurines of Buddha. Sink in the wondrous panoramic views of Genting Highlands and enjoy the gentle cool breeze at the observation deck. 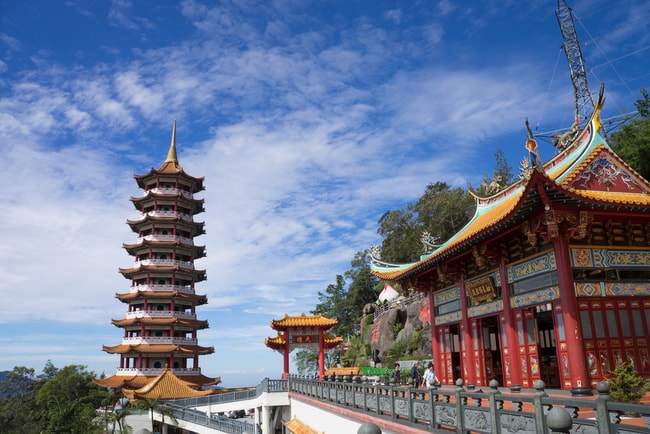