The Borneo Sun Bear: Where to Find the World's Smallest Bear 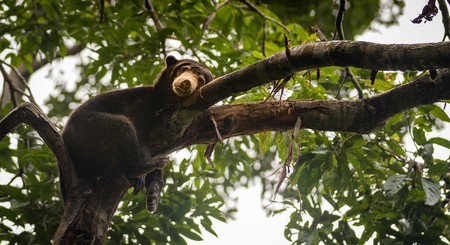 Look into the rainforest canopy and you might just spot the Borneo sun bear warming itself in the trees. The smallest species of bear in the world is an avid tree climber, but this Bornean native faces huge threats to its natural habitat. Mass deforestation, habitat destruction and illegal hunting and poaching across Borneo have caused their numbers to dwindle. The animal is already classed as vulnerable; if the rainforest disappears, so does the sun bear. Read on to learn about this elusive bear and where you can see it up close or in the wild.

Want to see the sun bear for yourself? Consider joining Culture Trip’s expertly curated 10-day wildlife adventure in Borneo. Led by our Local Insider, you’ll visit a sun bear sanctuary and cruise down the Kinabatangan River to look for them in the wild.

What makes the Borneo sun bear different from other bears?

The sun bear – or helarctos malayanus – is the smallest species of bear in the world. The Bornean sun bear is a sub-species, and is only found on the Southeast Asian island of Borneo. Its English name comes from the fact they commonly have a distinctive orange, sun-coloured patch on their chests. 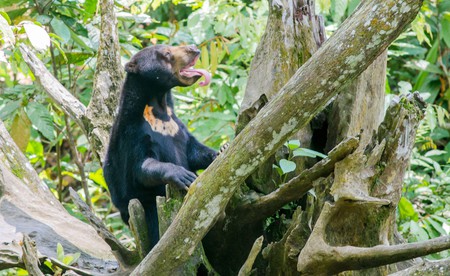 It spends much of its time in the trees, and is considered to be the most arboreal bear in the world. Sun bears will eat, sleep and sun themselves up to 7m (23ft) above ground. And they’re perfectly adapted to this tree-loving lifestyle with long claws and unusual, inward-facing front feet. 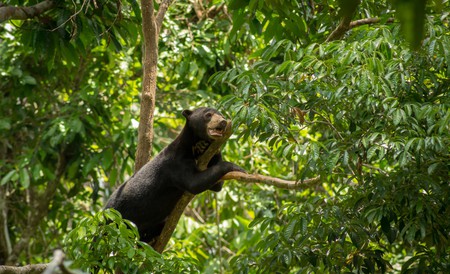 Like many bears, Borneo sun bears are omnivorous. They’re as happy to munch on figs, coconut palms and tree leaves as they are feasting on ants, termites or reptile eggs. They also have a particularly sweet tooth, and are known to use their powerful claws to tear into trees in search of bee hives. In Malay, the Borneo sun bear is traditionally known as beruang badu, or the honey bear, in tribute to its love for all things sweet.

Learn about them at the Bornean Sun Bear Conservation Centre

The Bornean Sun Bear Conservation Centre is the best place to see this unusual species of bear up close. This conservation and research centre is in the Malaysian state of Sabah, in the far northwest of Borneo. The nearest airport is in the city of Sandakan, a 30-minute drive away. 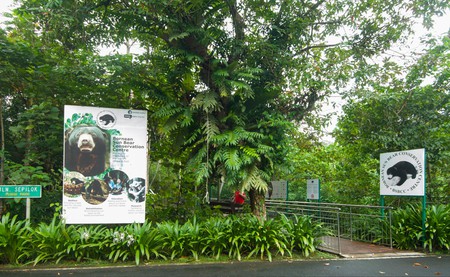 You can learn more about the Bornean sun bear at the conservation centre, which opened in 2008 in response to the need for new research into this unique creature. This isn’t a zoo, and the main goal here is to rehabilitate sun bears injured in the wild or who have been freed from captivity.

There’s a large, open observation platform looking over the sun bear habitat, but you might need to use the telescopes to see the small bears hiding in the distant trees. Right next to the centre is the Sepilok Orangutan Rehabilitation Centre, where you can see orangutans. The two conservation programmes share the same veterinary staff and are within walking distance of one another. 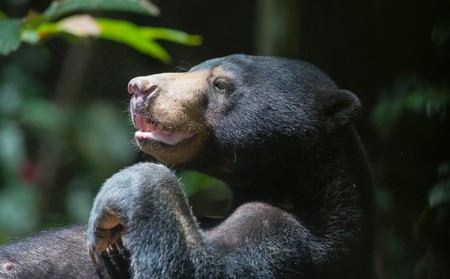 Where to see sun bears in the wild

Sun bears can be difficult to spot in the wild. Although they were once native to much of Southeast Asia and parts of the Indian subcontinent, the best place to see them in the wild today is in Malaysian Borneo.

One of the best opportunities is along the Kinabatangan River, which you can reach on a trip from Sandakan. Known as the Corridor of Life, this is a protected area of rainforest and river that’s home to increasing species of Bornean wildlife, including crocodiles, pygmy elephants and the Bornean sun bear.

Researchers are unsure how many Bornean sun bears are left in the rainforest, so you’ll need patience, luck and a little perseverance to encounter the world’s smallest bear in the wild. 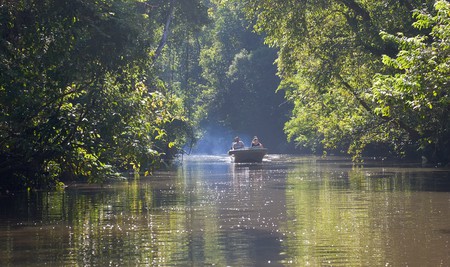