The Best Mural Artworks in Malaysia 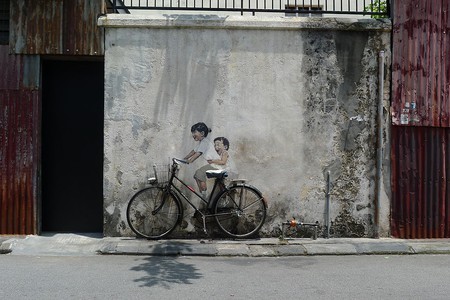 Artists have been painting mesmerizing murals at target locations across Malaysia. A visit to these art works will give you an insight in to Malaysian culture. Here are some of the wonderful murals that you should search out when you visit the country.

Kenji Chai is a globally known graffiti artist, currently based in Kuala Lumpur. His specialty is creating artworks with vibrant colours based on pop culture. He painted Uncage the Beast on the wall of The Bee, Publika, Kuala Lumpur, one of the most popular live music venues in Klang Valley.

As part of the #UncageMusic campaign under Urbanscapes, sponsored by Tiger Beer, Kenji painted the roaring tiger with Tiger Beer’s brand colours, wires and pop culture elements. This mural represents the growing populaity of Malaysia’s arts and entertainment scene among the young generations.

The artwork is a portrait of a city boy and a country boy playing the Wau Bulan (moon kite) painted with Jalur Gemilang (Malaysian flag) colors. It symbolizes the connection between every individual and represents people from diverse backgrounds coming together in unity. The Wau Bulan flying in the sky is a symbol of hope for the nation.

Anokayer and Yumz, previously together as ‘Medium Touch’ back in the early days, got back together for the #tanahairku 2014 Street Art Project. BRAVE is along Jalan Pudu where you can see the KL Tower from afar.

They painted a little boy wearing a tiger hat while he is playing with his tablet. It explores the relationship of modern technology and protecting heritage. An enthusiastic boy is curious to know about the world but concerned about keeping true to his own cultural values.

Park
Facebook
Email
Twitter
Pinterest
Copy link
Share
Map View
Graffiti artist Mohd Zaki bin Nordin, known as Escapeva (which stands for Escape Visual Art), has been developing his art career for past 11 years, he is influenced by modern society and social media. One of his works to take note of is The Rodent Control. Commissioned by the local council in Petaling Jaya, Escapeva took up the challenge by drawing a big owl at the car park in Seksyen 52, Petaling Jaya as part of the #CreativePJ campaign. The mysterious night owl, painted with different tones of blue with hint of red, sits in its nest and gazes across the township. You feel like the owl is watching you as you pass by.

To boost the art scene in Melaka, nine artists came together to paint their works on the walls of historical shophouses along the river in Jalan Kampung Hulu. Known as ProjectARM, these artworks are designed to highlight the beauty of Melaka. The murals depict the artists representation of Melaka and include a colourful mosaic painted on the walls of Kiehl’s store.

A walk along the other side of the river gives visitors a chance to see the full view of murals painted on shophouses or alternatively hop on the Melaka river cruise and admire the murals from the water.

It's so pretty here

Spa
Facebook
Email
Twitter
Pinterest
Copy link
Share
Map View
Suara Anak Malaysiaby Happy Human is a compilation of Malaysian voices, in different languages (English, Malay, and Chinese), that say what they think about Malaysia. Part of the SS2 Community Project – Art Mural, the mural inspires Malaysians to voice their thoughts about their home country. By speaking the truth, their voices will be heard. The mural is located at Zen Spa, Jln SS2/64, Petaling Jaya. Happy Human continues the Suara Project across Malaysia to give people of all ages the opportunity to share their voices through art.

Lithuanian contemporary artist Ernest Zacharevic is based in Penang. He is known for making use of props attached to walls and painting murals around them. He adds fun elements to some of his works that invite viewers to interact with the art.

One of the most well-known pieces to check out while you are in Penang is Little Children on a Bicycle, located at the shophouse on Armenian Street, Georgetown as part of the Penang Street Art project. The little girl and her younger brother ride a bicycle with smiles on their faces which bring a happy aura to the Armenian Street.

Children on the Swing (Louis Gan)

Another fun mural to take photo with is Children on the Swing, painted by Penang-born artist Louis Gan. The children are having fun on the swing at the imaginative street named Step by Step Lane. Wood and chains are attached to the wall so you can actually use the swings.

It is located at Lebuh Gat Chulia (behind the printing warehouse). Why not sit down on the swing and have fun while the painted children smile by your side?

Ernest Zacharevic was invited to paint seven Ipoh art wall murals. His works are related to presenting Ipoh’s heritage and culture with nostalgia. One of the most iconic murals to view is Evolution, located at Jalan Bijeh Timah.

The traditional Chinese ink painting depicts Ipoh’s evolution starting from a tin mining town back in the colonial days. The mining town with mountains and forests at the back tell its history of miners’ ups and downs, working to survive in tough times.

The #tanahairku 2015 Street Art Project returned for Merdeka and Malaysia Day, mentored by Kenji Chai. This time, at Kuching, East Malaysia. Pyrography artist Sonia Luhong and cat illustrator Amy Amin brainstormed together to come up with a piece that represents Kuching. Thus, the Leaping Feline (Kuching is derived from the malay word of cat, kucing) came about.

Walk along Lebuh Carpenter and you will see a mural of a domestic cat leaping like a leopard while wearing a traditional Iban headgear. The dreamy colours behind the cat bring us to the breathtaking world of Kuching and Iban culture.

Children was also part of #tanahairku 2015 Street Art Project. Hailing from Sarawak, artists Mohd Afiruddin (known as Dean R) and Amey Sheikh Ali teamed up together in painting the mural that symbolizes how the younger generations of Sarawak and Malaysia are moving forward.

The mural shows children’s faces, the future generation who will be shaping the nation. The mural is located at Lebuh Wayang, Kuching right next to the granary which is opposite Star Cineplex and Chinese temple. In writing in the mural, Menua Kitai, means Sarawak consistMs of different races and beliefs.