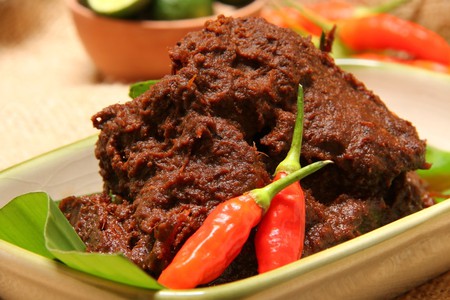 Recent Masterchef controversy has led to accusations of judges “whitesplaining” Malaysia and Indonesia’s favorite complement to their daily nasi (rice) — the rendang.

One of the judges on the BBC One show complained that “the skin isn’t crispy,” leading to derisive comments from netizens and even Malaysia’s prime minister.

Predecessor Dr Mahathir Mohamad also chipped in, suggesting that the judges may have confused rendang for KFC. Netizens responded with pictures of KFC chicken buckets.

Viewers have also flocked to YouTube to ridicule the Masterchef judge’s comment, including a viral video of “Chef Jo Cooks Crispy Chicken Rendang for Masterchef UK.”

The controversy has touched on an old (friendly?) rivalry between Malaysia and Indonesia over the origin of rendang, a flavorful meat dish stewed with coconut milk and assorted spices, including turmeric, lemongrass, galangal, ginger, shallots, chilis, and garlic.

This dish is widely accepted as having originated from the ethnic Minangkabau people, also known as ‘Minang,’ from West Sumatra, Indonesia.

Thanks to their culture of “merantau” (traveling or wandering), a large proportion of the ethnic Minang community have settled overseas, forming the majority of the population in Negeri Sembilan, Malaysia.

Controversy arose in the mid-2010s when Southeast Asian countries — Indonesia, Malaysia, and Singapore — tried to claim culture-specific dishes as part of their individual national heritage campaigns.

Group coordinator of the activist camp Masyarakat Peduli Budaya Indonesia, Budi Rahmulyo Adi Wibowo, said: “We Indonesians need to be stern, so that they [Malaysia] will no longer mess with us by claiming any of the Indonesian products or culture as theirs.”

In response, political analyst Professor Dr Ahmad Story Hussain of University Sains Malaysia has pointed out the shared history between Malaysia and Indonesia, in terms of food, language, culture, and clothing.

He mentioned that most of Malaysians’ ancestors were originally from Indonesia. “Let’s look at it this way,” he said, “this isn’t like claiming a territory, in which case the matter should be taken seriously and brought to court.”

When it comes to food, he thinks that “there’s no such thing as ‘that’s mine, this is ours’.”

“Making such claims would only sever the brotherly ties and increase hostility between two nations,” he added.

Perhaps the more important question isn’t who invented rendang, but who’s going to eat it. We know we’ll be first in line.