The welcome arch of Little India in Kuala Lumpur | © Gwoeii/Shutterstock

Kuala Lumpur’s Indian community provides tourists with the chance to experience a small part of the subcontinent in Malaysia. In a prime location near KL Sentral and bursting with shops, restaurants and culture, strolling through Little India in Kuala Lumpur is often a favourite activity in the multicultural capital.

Brickfields District near Bangsar is the official name for Little India in Kuala Lumpur. Residents have lived in this quarter for generations making it the largest and oldest enclave in Malaysia with Indians, Sri Lankans and Bangladeshis calling the neighbourhood home. Today, it’s quickly becoming a property hotspot because of its proximity to Kuala Lumpur’s prime transport hub, KL Sentral. 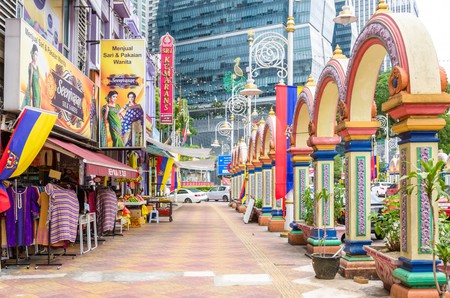 The colours and shops of Little India in Brickfields, Kuala Lumpur | © gracethang2/Shutterstock

Jump back a century and a half and Brickfields was full of wooden houses with thatched roofs. After a fire and flood destroyed much of the settlement in the 1880s, it was decided all property will be built using brick and tiles instead. Enterprising businessman Yap Ah Loy created a huge brickyard transforming today’s Little Indian into a gigantic clay field and produced the materials used to build early Malaysia. The British used the area for their Malayan Railway and brought Indian and Sri Lankan migrant workers. Many of the Indians here today are their descendants.

Little India in Kuala Lumpur was formerly along Jalan Tunku Abdul Rahman until it moved to Brickfields in 2009. The neighbourhood’s main street, Jalan Tun Sambanthan, is full of the sights, smells, sounds and tastes of India. Shops selling aromatic spices sit next to those blasting the latest Bollywood hits. Traditional clothes such as saris along with jewellery, henna tattoos along with the South Indian’s favourite Banana Leaf restaurants. Beautiful arches stretch along the side of the street while the district bursts with life, colour and soul. A large fountain marks the focal point, and the three-storied Indian Bazaar is a favourite place to find a bargain. After hours, the district lights up and gets bathed in even more colour. 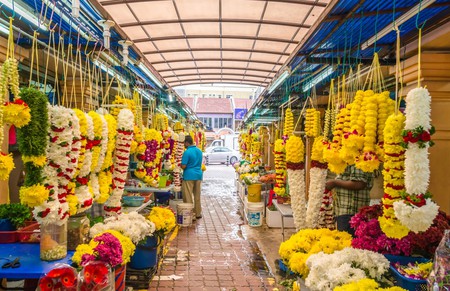 Apart from being a cultural enclave, Brickfield is said to be deific. Various temples, churches, shrines and mosques are found within Little India’s borders. Thean Hou Temple, a six-tiered Taoist temple near Jalan Syed Putra, is one of Southeast Asia’s oldest and largest. Churches dating back more than a century exhibiting an air of colonial styles including the Tamil Methodist and Evangelical Lutheran churches are highlights too. The photogenic and historical Vivekananda Ashram along Jalan Tun Sambanthan forms one of Little India’s more elegant buildings.

Most visitors typically spend between one and two hours exploring Little India in Kuala Lumpur. Many return to sample the local food and to dine at one of the traditional nasi campur and banana leaf restaurants. The district is within walking distance of KL Sentral and has plenty of budget-friendly hotels and Airbnbs nearby.