A Guide to Using Public Transport in Kuala Lumpur, Malaysia

Kuala Lumpur is a lively city, with a diverse range of experiences on offer, from world-class shopping malls to quaint local markets. Covering this Malaysian city in full is a mighty feat, so travellers should take advantage of the city’s vast and efficient public transportation system to get the best out of the city’s offerings.

If you’re looking to travel about this city using trains and buses, KL Sentral will be the main place to familiarise yourself with. It serves as the main station that allows travellers to interconnect between almost all train lines. Make sure to map out a route to this station from where you’re staying to guarantee a smooth transit within the city.

This is also the most accessible station in terms of getting tourist information, with an incredibly helpful information counter in the centre (all staff can speak English), and even a Tourism Malaysia outlet to help out with any further questions.

Single-ride passes are generally available for purchase at ticket machines and counters. These often require exact change, and can be hassle especially at peak hours where massive lines can be expected, especially at major stations.

If you are planning to use public transport for most of your travelling, it is recommended to go cashless and buy a Touch ‘n Go (TnG) card for around RM20 ($4.70 USD), which includes a RM10 ($2.35 USD) stored credit. The card is a prepaid smartcard that allows users to pre-load it with credit that will be deducted automatically as you tap in and out of trains and buses, as well as enjoy cheaper prices. These cards are available at the airport or at any major train station, and can be reloaded at most retail outlets and convenience store counters.

The brand new Mass Rapid Transit (MRT) line runs through the Kuala Lumpur city centre, providing direct access to tourist spots such as the National Museum and Central Market. The train line is also a great option for shoppers as it provides direct access to a plethora of malls, and even has a station in Bukit Bintang, the shopping and entertainment hub of Kuala Lumpur.

Most major stations have a large network of underground tunnels and bus services that connect them to the surrounding facilities, just grab a map and ask the friendly and helpful staff on duty to help you map out your route. A ride costs between RM1.10 ($0.25 USD) to RM6.40 ($1.50 USD), with cheaper prices available when using the cashless option of a TnG card. 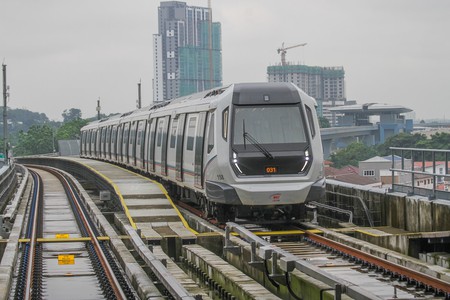 Not as conveniently available within the KL city centre, the KTM Komuter system caters more to the local residents of the city rather than tourists. However, it is does provide travellers with a much cheaper travel option to the beautiful Batu Caves, which is otherwise only reachable by taking a tour bus or taxi to the location, either of which can be rather costly. A trip from KL Sentral to Batu Caves will cost about RM2 ($0.47 USD) one-way, and upon arrival at the Batu Caves, just walk across the car park to get to the main entrance.

Easily the best option to get around KL as a traveller right now is via the GO KL City Bus. It’s a free city bus service with four routes that covers most of the major tourist spots of Kuala Lumpur, which includes the likes of Bukit Bintang, Chinatown, and KLCC. These pink buses are hard to miss and can be boarded at any of its stops, and has a frequency rate of about 15 minutes – with each bus being fully air-conditioned and equipped with free Wi-Fi. A full route map of the Go KL city bus can be found here. 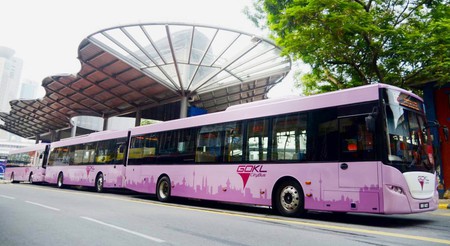 The other major public bus service, the RapidKL Bus, is generally not as encouraged as a mode of transportation for non-locals, given their erratic scheduling. The best way to approach taking a RapidKL bus is to board them at a train station, after having previously established and mapped out your route with the information counter or with the bus drivers themselves. These buses usually cost up to RM3 ($0.71 USD), and can either be paid in exact change or through tapping your TnG card twice, once upon entering and another upon alighting.

The Light Rail Transit (LRT) system is the most widely used of the public transportation systems, and will be your best bet to get to most areas of KL that aren’t immediately within the city centre. Stations are often located at popular areas in KL, and serve as a good mid-way point to destinations, but don’t often provide direct access. Travellers will often have to pair using the LRT with walking a slight distance or grabbing a taxi/ride-hail car to their destination. A ride can cost between RM0.80 ($0.19 USD) to RM8.00 ($1.90 USD), with cheaper fares for those using the cashless option of a TnG card.

One of the many LRT trains | ©Yosri/WikiCommons

Taxis in Malaysia have a notorious reputation for not using their meter and tricking individuals into paying exorbitant costs. Many Malaysians have mostly foregone the use of taxis in favour of ride-hailing apps such as Grab or Uber, as rates are easier to track and allow online card payment through the app. Most popular locations even have designated pick-up spots for users of these apps.

If necessary, it is advised to use a taxi with caution. Before boarding the taxi, ask if the driver can take you to your destination and if they could use the meter. If they try to barter, politely decline, thank them, and move on to find another taxi. The standard fare for taxis are RM3 ($0.71 USD) for the first 1km and subsequent 150 metres is RM0.10 ($0.02 USD), and need to be paid in cash only.

Solely for travelling to and from the airport, this non-stop airport transfer travels between Kuala Lumpur International Airports (KLIA and KLIA2) and the city centre (KL Sentral). The service provides free porter service at platforms and high-speed Wi-Fi onboard. Trains depart every 15 minutes during peak hours, and have a travel time of below 30 minutes. Train tickets cost RM55 ($13 USD) for a single-trip, and RM100 ($23.50 USD) for a return. If your place of stay doesn’t provide an airport service, this may be a cheaper alternative, given that a taxi fare for the same trip, may cost upwards of RM60 ($14 USD) one-way.