11 Awesome Native Animals You Can See in Borneo 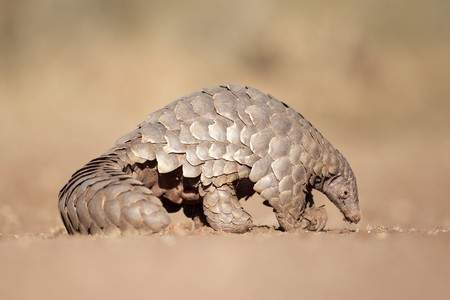 Indonesia, Malaysia and Brunei share the island of Borneo, one of the world’s most biodiverse regions. Inside the dense and often unexplored rain forests live elephants, deer, tigers, primates and several other types of plants, insects and birds. Discover our favourite animals in Borneo and where to see them below.

The proboscis monkey, or Nasalis larvatus, is probably the most unusual animal in Borneo. The reddish–brown primate has a long nose, which can reach up to 18 centimetres (7 inches) in males. The purpose of the elongated nose helps to attract mates and to amplify the sound of warning calls. Grey limbs and a distinctive pot belly are other defining characteristics. Living on a diet of mainly mangrove shoots and insects, the proboscis monkey, named after its nose, are strictly protected animals with estimates suggesting only 1,000 remain in the wild. Small populations live in Kota Belud and Beaufort near Kota Kinabalu and along the Kinabatangan River in Eastern Sabah. 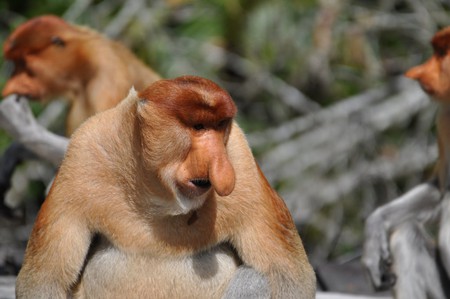 Orangutan translates to ‘man of the forest’, referring to the resemblance of this primate to humans. The intelligent animals only live in Borneo and Indonesia’s Sumatera and are relatively solitary compared to other species. Sadly, with deforestation, logging and hunting, orangutan numbers are sharply declining.

When people hear the term bear, they automatically think of polar and grizzlies. But Borneo has their own species called a sun bear. The bears, also called Malayan sun bears, live in the dense lowland forests of Southeast Asia. With their relatively small size, they often resemble a small dog; a nocturnal and shy species, they are rare to see in the wild. A trip to Sabah’s Danum Valley Conservation Area will likely reveal a glimpse of these animals in Borneo living in their natural habitat.

The critically endangered Sunda Pangolin resembles ‘an artichoke with legs’. The critter is the world’s only mammal covered in scales and has a tongue stretching longer than its body. Feasting on a diet of ants and insects, nobody knows much about these difficult-to-find nocturnal animals in Borneo. Those staying in Kota Kinabalu’s Rasa Ria can join a pangolin night trek through the rain forest in search of the elusive animal.

The nocturnal sambar deer, or rusa, are among some of Asia’s biggest deer. Adult males can reach a length of more than 2 metres (6.6 feet) and a weight of over 200 kilograms (441 pounds). Found across much of Southeast Asia, rusa are at home in Borneo’s rain forests and tend to be some of the easiest animals in Borneo to spot.

While not technically a deer (classified as a tragulidae), the nocturnal and solitary critter lives mostly in the rainforests of Borneo and Sumatera. Reaching a height of barely 1 foot (30 centimetres) and looking similar to a small cat, the mouse deer holds the title as the world’s smallest hooved animal. These shy animals in Borneo possess a remarkable reproductive ability: Females may conceive just two hours after birth and newly born fauns can stand after 30 minutes! 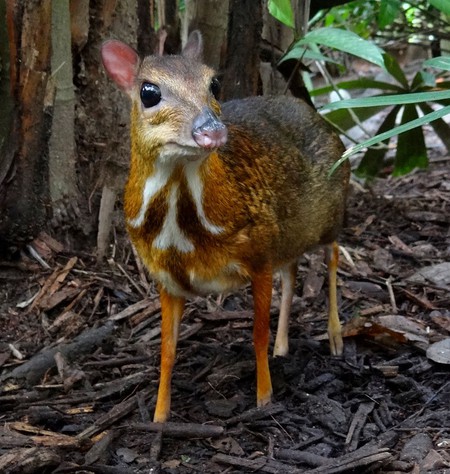 The world’s smallest elephants are among the cutest animals in Borneo. Living in northern and northeast Borneo, these tiny elephants with over-sized ears and long tails are declining because of deforestation and hunting. Estimates suggest only 1,500 to 3,000 remain in the wild, making the friendly and adorable elephants in dire need of protection. Lucky tourists might catch a glimpse of Borneo’s Pygmies at Danum Valley Conservation Area or, believe it or not, swimming in the Kinabatangan River.

Clouded leopards are among some of the more elusive animals in Borneo. Preferring to live in the treetops throughout the rain forests in Asia, the leopard possesses an incredible and agile ability to climb. The nocturnal creatures hunt smaller mammals including deer, pigs and even monkeys. Given their nature, seeing a clouded leopard in the wild is rare.

The elegant and gracious hornbills, known for their unusual ‘double-storied bill’ and looking like cartoon characters, live throughout the tropics in Asia and Africa. But Borneo’s Sarawak holds a special place for twitters wanting to catch a glimpse of the giant birds. Housing eight out of the world’s 54 species, Sarawak deserves the state nickname as ‘The Land of the Hornbills’. The most common is the black-bodied and white-tailed Rhinoceros hornbill with a white and orange beak which features on the state’s emblem. 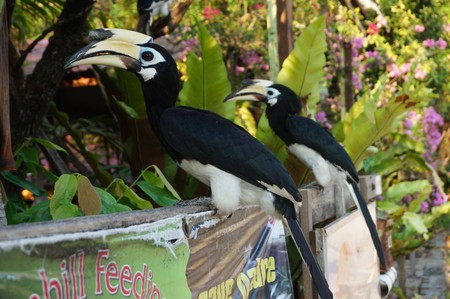 One of the many Hornbill species found in Malaysia | © Sam Bedford

Sadly, the Sumatran Rhino is on the verge of extinction. With the title as the world’s smallest and having a body covered in long hair, Asia’s only two–horned rhino has a reputation for being so elusive that even rangers spending all their lives in the forest rarely see one. It’s unknown how many remain, but estimates suggest less than 100 live in northern Sumatra and the heart of Borneo.

The Bornean slow loris, or Nycticebus borneanus by its scientific name, is classified as a primate but looks more like a tiny lemur. Living a nocturnal existence, this animal in Borneo can be quite challenging to spot in its natural habitat. Relatively large populations live in central Borneo, and new species of slow loris are still being discovered today. 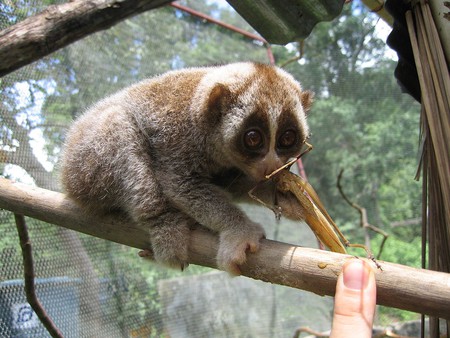