How Cycling Across Laos Changed Me Forever 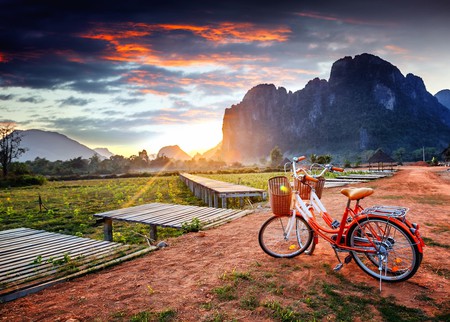 I have admired Laos’ misty mountains from an airplane landing in Luang Prabang. I have seen the sun rising over the rice paddies from the windows of the sleeping bus. But I’ve never fallen so in love with a place, a country and a people as I have while cycling the 500km over 10 days from Savannakhet to 4,000 Islands through southern Laos.

Before you think: “Well I could never do that,” I’ll have you know that I am no super woman. I had never toured by bicycle before and doubted my physical and mental ability to complete the journey. A friend who recently cycled across America told me: “It’ll ruin travel for you in the best way. You’ll never think of distance or your own strength the same way again.” He was right. 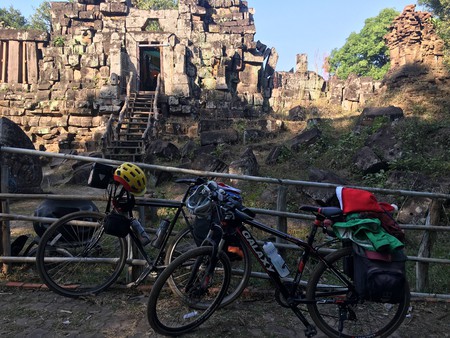 So what spurred me to spend the holidays cycling southern Laos? I rode my bicycle through the plains of Savannakhet. I swam in the waterfalls of Champasak, spent time in a Kalum village learning about coffee and medicinal plants, and zip lined over Tad Lo gorge. I ate copious amounts of noodle soup and papaya salad. I wouldn’t have done any of these things if I hadn’t met the founder of Routes of Change, Markus, by chance in Laos’ capital of Vientiane. His organization supports local NGOs while practising carbon-neutral travel. He started his one way journey around the globe traveling without using a motor in Toronto, sailed across the Pacific and is now cycling through Asia. On a whim, he asked me to join him for a leg. I think he was as surprised as I was that I quickly and resoundingly said yes. 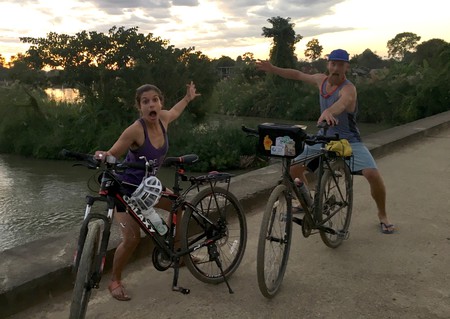 What exactly had I gotten myself into? I needed a bike, one with touring tires. I borrowed panniers and packed as lightly as I ever had for such as long time away from home. The test rides I said I’d do? I didn’t. The training I should have done? Same. I love biking. I commuted by bicycle when I lived in Chicago, started monthly Bike and Brew rides and introduced a lot of friends to the joys of tackling a long ride. But so many miles and for so many days? I wore the same outfit every day: my bike shorts, a long sleeved blue zip up, my Cleveland Cavaliers visor, and a bandana. I washed my clothes in the sink hoping they’d be dry by the morning. Sometimes I was pleasantly surprised I put on damp, freezing clothes, drying extra articles on the back of my pack. I learned humility and gratitude for the smallest things.

Sometimes we get creeper motorcyclists who follow behind us at a safe distance without saying a word. They are definitely checking out my butt and maybe Gina’s too…#paddedbikeshorts #laosby bike #ginabeach #creepermotorcyclists

“Sabaidee!” I felt like a celebrity. Groups of Lao children would run out of school yards waving and shouting. “Good morning!” tickled my ears no matter the time of day. I received high fives and thumbs up from the backs of tuk-tuks and waves from the back of tractors. Even when my lips were parched and my legs were burning I mustered a wave, a nod, a “Saibaidee.” I have never felt simultaneously more welcome, and more alien as when a group of children shout “Falang! Falang!” And rush to the street to stare, gawk and laugh. My Lao is, passable. It’s basic but that didn’t stop everyone we met from talking with us in a mixture of broken Lao and English. “Where are you from?” “Where are you going?” “You are so strong; you’re so beautiful.” The answers flowed like a broken record: “I am American, I’m going to 4,000 Islands, you are strong and beautiful too.” 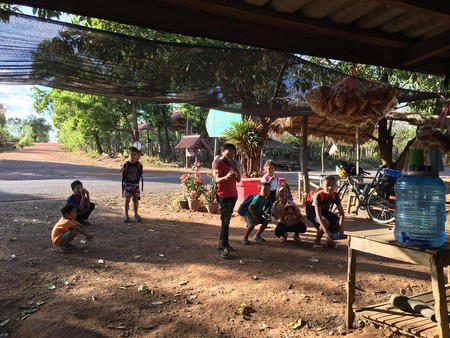 The roads were good until they were a dusty, gravely mess. The weather was cool and breezy until it was scorching, and unbearably hot. Time passes. The winds change, the journey ends. I can say unequivocally that I am a changed person for having cycled southern Laos. I have let go of so much fear. Fear that I’m not strong enough or unworthy of everything this world has to offer. I’ve let go of the assumption that certain forms of travel are “for other people.” And that not having a plan “isn’t for me.” My heart will forever hold the feelings of flying downhill as water buffalo look on, battling the wind across bridges suspended over streams and gripping the handle bars as trucks barrel down the two-lane highway a little too fast and a little too close for comfort. 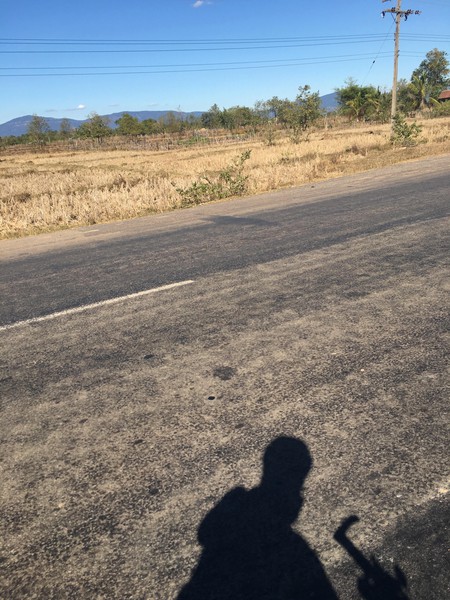 I left my bicycle in Pakse for a week while I showed a friend from Chicago my adopted country in Southeast Asia. We took buses, planes, tuk-tuks, and taxis. My cyclist friend was right, I was already ruined by the freedom of moving where and when I wanted, under my own power. Markus and I had parted ways on the Laos-Cambodian boarder where he’s continuing his journey (you, too, can join him for a leg if you’re in the region.) I wasn’t originally planning on cycling back to Savannakhet, but I decided the true test of my new touring skills would be a solo journey. Resting when I was tired. Eating when I was hungry and pushing myself to bike 240km through the villages and rice paddies over two days. I did it. I’m a changed women, a stronger woman. And the Laos countryside has made an indelible mark on my heart. I’ve already planned my next trip heading north: Savannakhet to Vang Vieng.